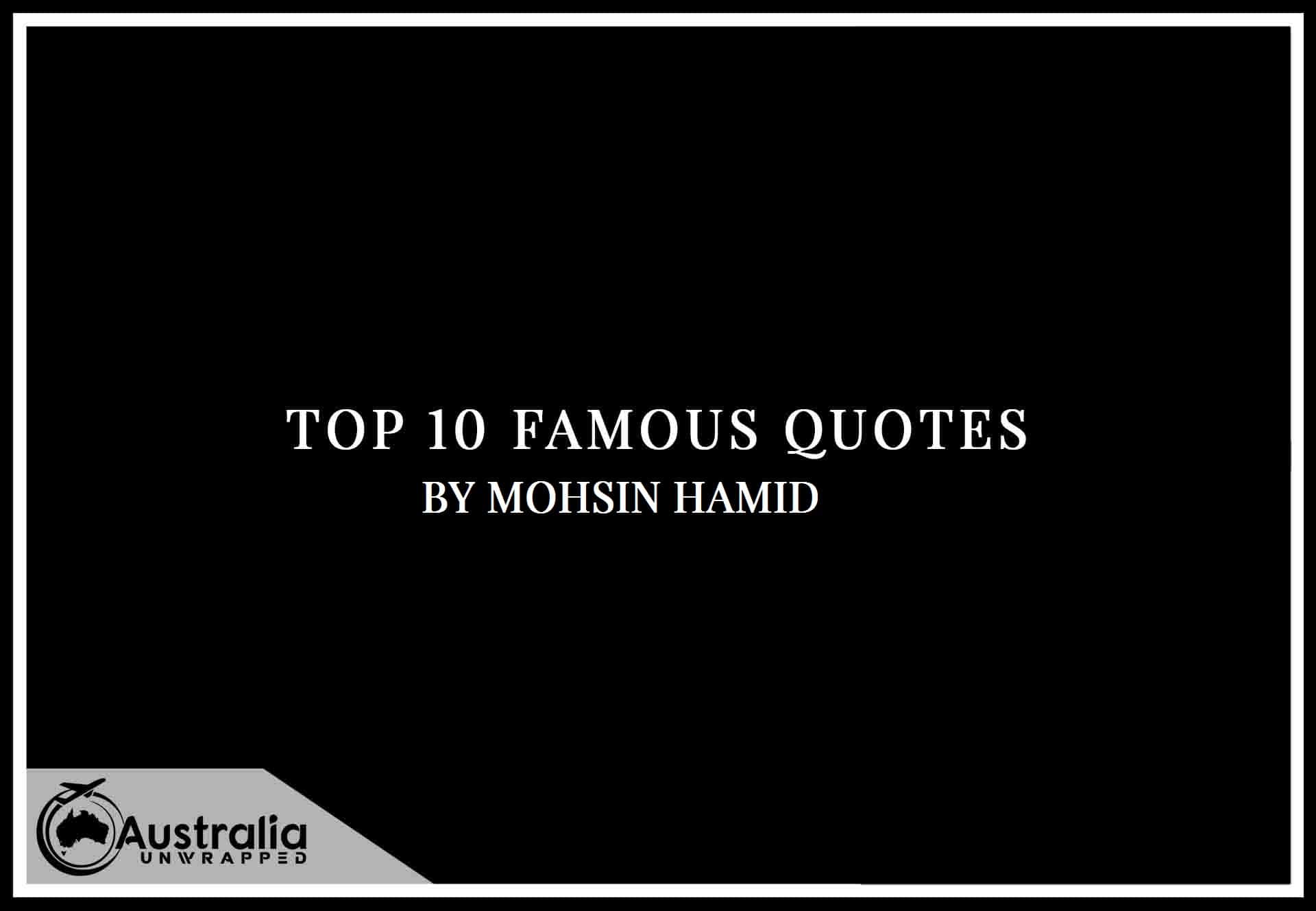 Quotes, who doesn’t love a good quote? This series of articles we look at Top 10 Famous Quotes by Author Mohsin Hamid, author quotes are always a challenge and fun to pick, with Mohsin Hamid you will find my Ten favorites of Mohsin Hamid’s quotes.

Mohsin Hamid is the author of four novels, Moth Smoke , The Reluctant Fundamentalist , How to Get Filthy Rich in Rising Asia , and Exit West , as well as a book of essays, Discontent and Its Civilizations .

He has been featured on bestseller lists, adapted for the screen, shortlisted for the Man Booker Prize, selected for twenty awards, and translated into thirty-five languages.

He spent almost half his life in Lahore and the rest in New York, London, and California.

More from the Author: https://amzn.to/3aghd6o

“We are all migrants through time.”
― Mohsin Hamid, Exit West

“If you have ever, sir, been through a breakup of a romantic relationship that involved great love, you will perhaps understand what I experienced. There is in such situations usually a moment of passion during which the unthinkable is said; this is followed by a sense of euphoria at finally being liberated; the world seems fresh as if seen for the first time then comes the inevitable period of doubt, the desperate and doomed backpedaling of regret; and only later, once emotions have receded, is one able to view with equanimity the journey through which one has passed.”
― Mohsin Hamid, The Reluctant Fundamentalist

“We are all refugees from our childhoods. And so we turn, among other things, to stories. To write a story, to read a story, is to be a refugee from the state of refugees. Writers and readers seek a solution to the problem that time passes, that those who have gone are gone and those who will go, which is to say every one of us, will go. For there was a moment when anything was possible. And there will be a moment when nothing is possible. But in between we can create.”
― Mohsin Hamid, How to Get Filthy Rich in Rising Asia

“As a society, you were unwilling to reflect upon the shared pain that united you with those who attacked you. You retreated into myths of your own difference, assumptions of your own superiority. And you acted out these beliefs on the stage of the world, so that the entire planet was rocked by the repercussions of your tantrums, not least my family, now facing war thousands of miles away.”
― Mohsin Hamid, The Reluctant Fundamentalist

“Every time a couple moves they begin, if their attention is still drawn to one another, to see each other differently, for personalities are not a single immutable color, like white or blue, but rather illuminated screens, and the shades we reflect depend much on what is around us.”
― Mohsin Hamid, Exit West

“To love is to enter into the inevitability of one day not being able to protect what is most valuable to you.”
― Mohsin Hamid, Exit West

“And so their memories took on potential, which is of course how our greatest nostalgias are born.”
― Mohsin Hamid, Exit West

“Time only moves in one direction. Remember that. Things always change.”
― Mohsin Hamid, The Reluctant Fundamentalist

“when we migrate, we murder from our lives those we leave behind.”
― Mohsin Hamid, Exit West

“…he prayed fundamentally as a gesture of love for what had gone and would go and could be loved in no other way. When he prayed he touched his parents, who could not otherwise be touched, and he touched a feeling that we are all children who lose our parents, all of us, every man and woman and boy and girl, and we too will all be lost by those who come after us and love us, and this loss unites humanity, unites every human being, the temporary nature of our being-ness, and our shared sorrow, the heartache we each carry and yet too often refuse to acknowledge in one another, and out of this Saeed felt it might be possible, in the face of death, to believe in humanity’s potential for building a better world, so he prayed as a lament, as a consolation, and as a hope….”

More from the Author: https://amzn.to/3aghd6o