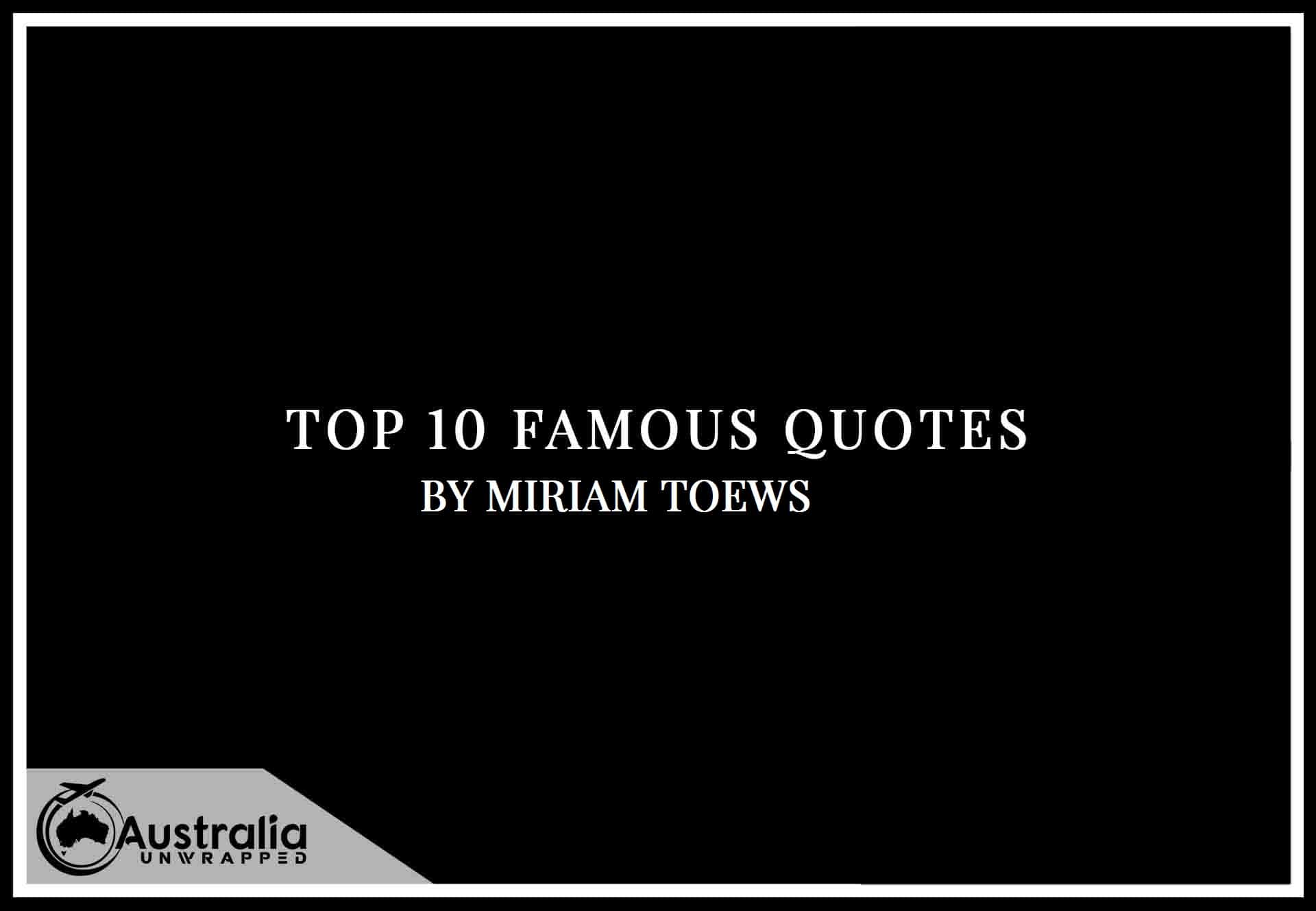 Quotes, who doesn’t love a good quote? This series of articles we look at Top 10 Famous Quotes by Author Miriam Toews, author quotes are always a challenge and fun to pick, with Miriam Toews you will find my Ten favorites of Miriam Toews’s quotes.

Miriam Toews is a Canadian author of Mennonite descent. Born in Steinbach, Manitoba, she lived in Montreal and London before settling in Winnipeg.

Toews attended the University of Manitoba and the University of King’s College in Halifax. He has also worked as a freelance newspaper and radio journalist. In her non-fiction book, “Swing Low: A Life,” she wrote about her depressed father. Her 2004 novel “A Complicated Kindness” spent over a year on the Canadian bestseller lists and won the Governor General’s Award for English Fiction. In the 2006 edition of Canada Reads, the novel featured a teenage girl who longs to escape her small Russian Mennonite town and hang out with Lou Reed in the slums of New York City.

More from the Author: https://amzn.to/3nFqgkI

“Life being what it is, one dreams not of revenge. One just dreams.”
― Miriam Toews, A Complicated Kindness

“Dan wanted me to stay. I wanted Elf to stay. Everyone in the whole world was fighting with somebody to stay. When Richard Bach wrote “If you love someone, set them free” he can’t have been directing his advice at human beings.”
― Miriam Toews, All My Puny Sorrows

“But whatever, we descendants of the Girl Line may not have wealth and proper windows in our drafty homes but at least we have rage and we will build empires with that, gentlemen.”
― Miriam Toews, All My Puny Sorrows

“It was the first time that we had sort of articulated our major problem. She wanted to die and I wanted her to live and we were enemies who loved each other.”
― Miriam Toews, All My Puny Sorrows

“…and I put on “All My Love” and watched the sun rise yet again and thought thank you Robert Plant for all your love but do you have anymore?”
― Miriam Toews, A Complicated Kindness

“…just because someone is eating the ashes of your protagonist doesn’t mean you stop telling the story.”
― Miriam Toews, All My Puny Sorrows

“She was becoming sad. There is no joy involved in following others’ expectations of yourself.”
― Miriam Toews

“Can’t you just be like the rest of us, normal and sad and fucked up and alive and remorseful?”
― Miriam Toews, All My Puny Sorrows

“Perhaps depression is caused by asking oneself too many unanswerable questions.”
― Miriam Toews, Swing Low

“Is it wrong to trust in a beautiful lie if it helps you get through life?”
― Miriam Toews, A Complicated Kindness

“Things shouldn’t hinge on so very little. Sneeze and you’re highway carnage. Remove one tiny stone and you’re an avalanche statistic. But I guess if you can die without ever understanding how it happened then you can also live without a complete understanding of how. And in a way that’s kind of relaxing.”

More from the Author: https://amzn.to/3nFqgkI