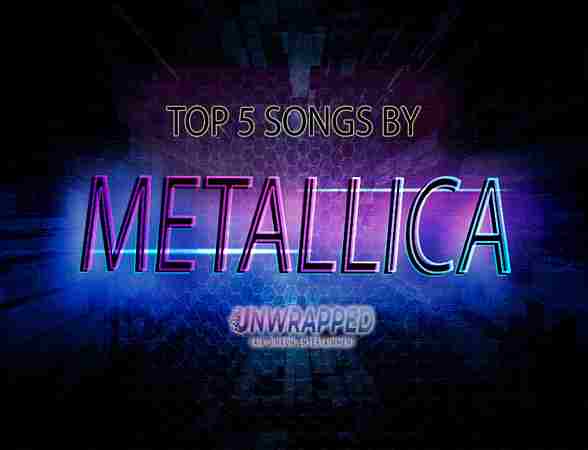 We know how excited you are to be swept away by music through Metallica‘s Top 5 Tracks. Australian Unwrapped would like to give you first a glimpse of the life of the artist. Enjoy reading and listening!

Who are Metallica: Songwriters Hetfield and Ulrich, longtime lead guitarist Kirk Hammett and bassist Robert Trujillo comprised the American heavy metal band Metallica. The band’s breakthrough came with the album Master of Puppets (1986), considered to be one of the heaviest metal albums of all time. Metallica was nominated for its first Grammy award with …And Justice for All (1988). In 1991, they released their self-titled fifth album, Metallica (1991), was a departure from the band’s traditional thrash base approach. It achieved substantial commercial success and has sold over 16 million copies in the United States to date, making it the best-selling album of all time.

The first time James Hetfield played guitar was in middle school, when he met Ron McGovney.
Ulrich’s friend Ron Quintana was brainstorming names for a fanzine and had considered MetalMania or Metallica. Ulrich was interested in Metallica, so he suggested Quintana use MetalMania instead.
The band was formed in Los Angeles when Ulrich placed an advertisement in a Los Angeles newspaper, The Recycler, in 1991 calling out metal musicians.

We freaking love music here at Unwrapped, and we adore Metallica. In our humble opinion, here are the BEST FIVE SONGS by the legendary Metallica (most liked, listened and downloaded songs) across the web!!!

Pretty fucking good huh?
So we all still having some fun here?
We got some sweat going on out there I fucking hope?
We like to see some fucking action going on
Who?
Yeah yeah yeah, that’s where we fucking are man. don’t forget it
Cerveza, man! eh?
Metallica, Metallica
Have some fucking Guevara
A little beer for my throat
A little drinking music maestro
Hey y’all can join in if you want
Hail Satan if you please.
I’m just kidding man
Maybe
That’s Jason

End of passion play
Crumbling away
I’m your source of self-destruction
Veins that pump with fear
Sucking darkeness clear
Leading on your death’s construction
Taste me, you will see
More is all you need
Dedicated to
How I’m killing you
Come crawling faster (faster)
Obey your master (master)
Your life burns faster (faster)
Obey your
Master
Master
Master of puppets, I’m pulling your strings

New blood joins this Earth
And quickly he’s subdued
Through constant pained disgrace
The young boy learns their rules
With time the child draws in
This whipping boy done wrong
Deprived of all his thoughts
The young man struggles on and on, he’s known
Ooh, a vow unto his own
That never from this day
His will they’ll take away
What I’ve felt
What I’ve known
Never shined through in what I’ve shown
Never be
Never see
Won’t see what might have been

I hope you enjoyed listening to Metallica !