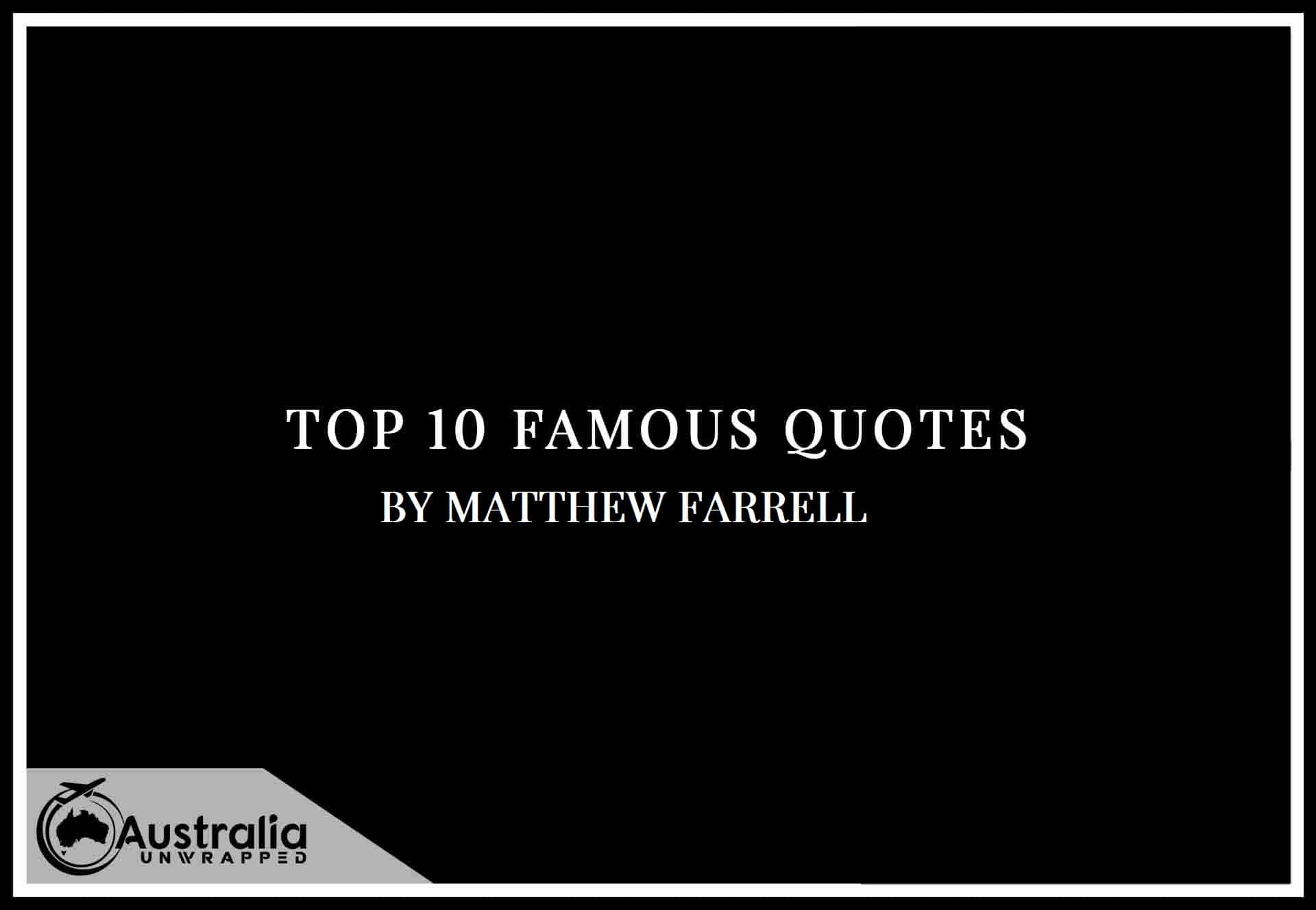 Quotes, who doesn’t love a good quote? This series of articles we look at Top 10 Famous Quotes by Author Matthew Farrell, author quotes are always a challenge and fun to pick, with Matthew Farrell you will find my Ten favorites of Matthew Farrell’s quotes.

Matthew Farrell is a Washington Post and Amazon Charts bestselling author of the Adler & Dwyer thriller series. He lives just outside of New York City in the Hudson Valley with his wife and two daughters and is working on his next book.

More from the Author: https://amzn.to/3yoKHs4

“You ever stop to think about the evil in this world?” Father Brennan chuckled. “Of course. The evil in this world can seem quite overwhelming sometimes, but we have a choice to give in to it or not. For example, you choose to see evil because you’re tasked with bringing murderers to justice. People who watch television see evil because that’s what sells, so that’s all the media shows them. Me, I choose to see life. I see the joy of a new mother holding her child for the first time. I hear the laughter of newlyweds as they walk down the church aisle together as husband and wife. I see the joy of a family getting together for the holidays. These are the things that give me hope. I’ve seen the dark side too. More times than I wish to count. But I balance it with the good. I suggest you do the same. Evil is part of this world, as it’s part of your job, and it will remain so until the end of days, I’m afraid. You need to counterbalance it with the good. Find the good.”
― Matthew Farrell, What Have You Done

“half-charred brick building. Three of the police units had set up to act as a barrier between the public and the first responders. It appeared as though the blaze had been contained. Clusters of firefighters milled about the property and parking lot, packing up gear and rolling up hoses. The science building was stained black with soot. Its roof, where a team of firemen had poked holes through the shingles for ventilation, was badly damaged, as was the west side of the structure. Glass had been”
― Matthew Farrell, I Know Everything

“They’d been living together for about a year when they’d taken that trip to Italy. And he had asked her to marry him at the end of it, in Rome, right outside the Vatican. The woman he’d met by chance in a bar had turned out to be an angel who’d been sent to reconstruct his life and make him whole again. Would he disintegrate without her? Could he move on? The clock on the nightstand read 2:37. Randall stood in the bathroom, looking at himself in the mirror. He reached behind”
― Matthew Farrell, I Know Everything

“Evil is part of this world, as it’s part of your job, and it will remain so until the end of days, I’m afraid. You need to counterbalance it with the good. Find the good.”
― Matthew Farrell, What Have You Done

“remove that tendency and thus make them regular members of society again. Just like you and me.” “You’re removing their homicidal tendencies?” “That’s right.”
― Matthew Farrell, I Know Everything

“And don’t forget to find the good. That’s the key to everything.”
― Matthew Farrell, What Have You Done

“lasted for almost two years.”
― Matthew Farrell, What Have You Done

“someone to commit a crime”
― Matthew Farrell, What Have You Done

“stores that lined”
― Matthew Farrell, What Have You Done

More from the Author: https://amzn.to/3yoKHs4