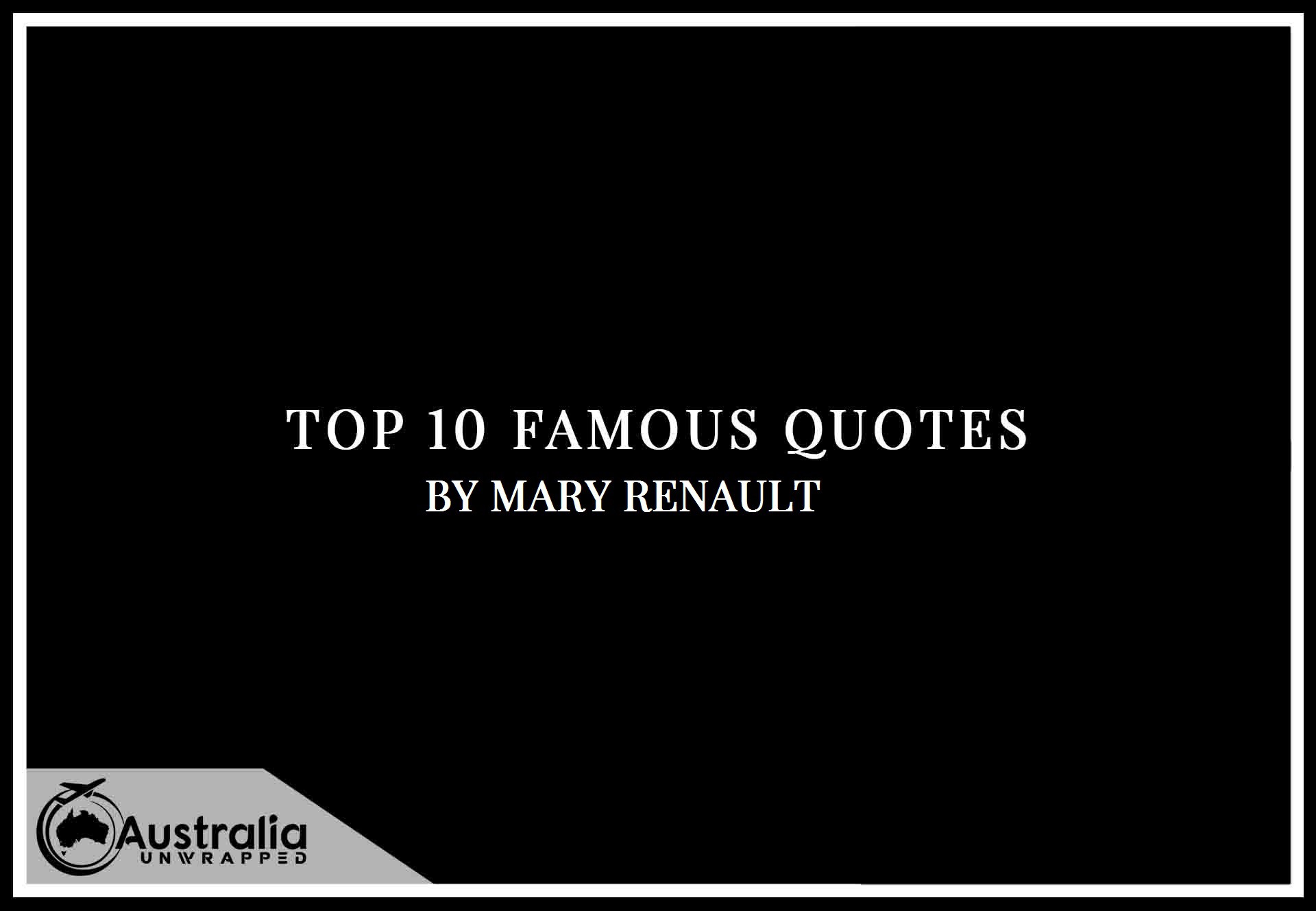 Mary Renault, a writer whom I am guessing you love? Here are our 10 best Mary Renault quotes for you to enjoy. At Australia Unwrapped we believe every book has at least one quotable line, and our mission is to find them all. Here you will find Mary Renault’s top 10 popular and famous quotes. Like every good writer Mary Renault made a number of memorable quotes, here are some of our favorites:

Mary Renault is best known for her historical novels set in Ancient Greece. She also wrote a non-fiction biography of Alexander the Great, as well as vivid fictional portrayals of Theseus, Socrates, Plato and Alexander the Great.

All of her historical novels are set in ancient Greece. A pair of novels about the mythological hero Theseus and a trilogy about Alexander the Great are included. The Charioteer (1953), about two young gay servicemen who strive for a relationship based on the ideals in Plato’s Phaedrus and Symposium, is a warm-up for Renault’s historical novels. As a result of turning away from the 20th century and focusing on stories about male lovers in ancient Greek warrior societies, Renault was no longer plagued by issues of homophobia or anti-gay prejudice. She was instead able to examine the nature of love and leadership, while focusing on larger ethical and philosophical concerns. After The Last of the Wine proved that American readers and critics would accept a serious gay love story, The Charioteer was published in 1959.

More from the Author: https://amzn.to/3OFux2W

“To hate excellence is to hate the gods.”
― Mary Renault, The Persian Boy

“Do not believe that others will die, not you…. I have wrestled with Thanatos knee to knee and I know how death is vanquished. Man’s immortality is not to live forever; for that wish is born of fear. Each moment free from fear makes a man immortal.”
― Mary Renault, Fire from Heaven

“I thought, There goes my lord, whom I was born to follow. I have found a King.
And, I said to myself, looking after him as he walked away, I will have him, if I die for it.”
― Mary Renault, The Persian Boy

“It is better to believe in men too rashly, and regret, than believe too meanly. Men could be more than they are, if they would try for it. He has shown them that.”
― Mary Renault, The Persian Boy

“There is only one kind of shock worse than the totally unexpected: the expected for which one has refused to prepare.”
― Mary Renault, The Charioteer

“A man is at his youngest when he thinks he is a man, not yet realizing that his actions must show it.”
― Mary Renault, The King Must Die

“One must live as if it would be forever, and as if one might die each moment. Always both at once.”
― Mary Renault, The Persian Boy

“One might have supposed that the true act of love was to lie together and talk.”
― Mary Renault, Fire from Heaven

“The rightness of a thing isn’t determined by the amount of courage it takes.”
― Mary Renault

“True friends share everything, except the past before they met.”
― mary renault, Fire from Heaven

Quotes for all, here you found our selection of 10 Mary Renault quotes. Make sure you help by commenting your best Mary Renault quote below and sharing our favorite authors so we can look them up, read some of their works and give you the best quotes we can find. We hope you enjoyed our top 10 quotes by Mary Renault. However, feel free to comment below if you disagree or would like to include some other great and memorable Mary Renault quotes in our list.

“You mustn’t get so upset about what you feel, Spud. No one’s a hundred per cent consistent all the time. We might like to be. We can plan our lives along certain lines. But you know, there’s no future in screwing down all the pressure valves and smashing in the gauge. You can do it for a bit and then something goes. Sometimes it gets that the only thing is just to say, ‘That’s what I’d like to feel twenty-four hours a day; but, the hell with it, this is how I feel now.”
― Mary Renault, The Charioteer

More from the Author: https://amzn.to/3OFux2W