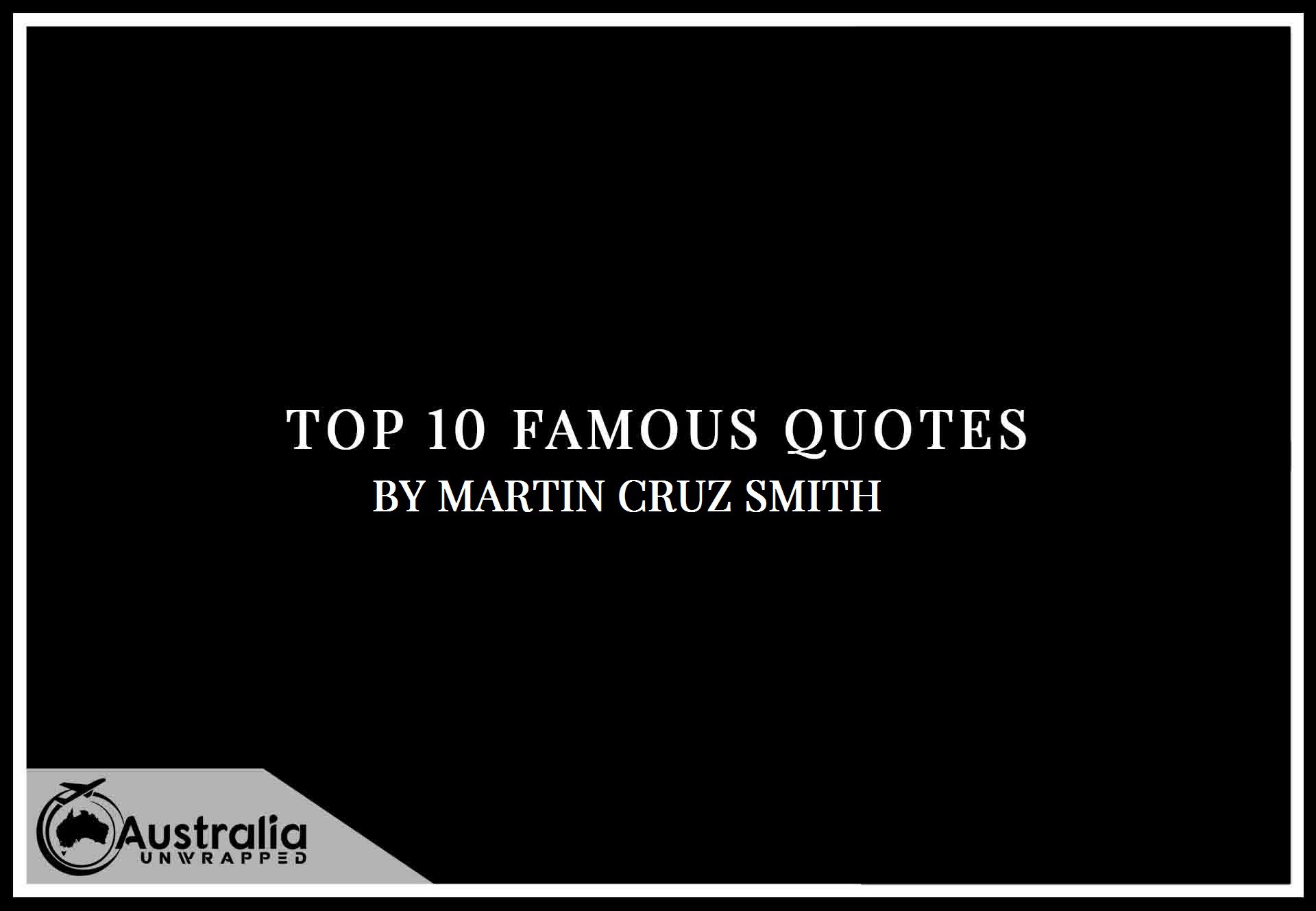 Martin Cruz Smith, a writer whom I am guessing you love? Here are our 10 best Martin Cruz Smith quotes for you to enjoy. At Australia Unwrapped we believe every book has at least one quotable line, and our mission is to find them all. Here you will find Martin Cruz Smith’s top 10 popular and famous quotes. Like every good writer Martin Cruz Smith made a number of memorable quotes, here are some of our favorite’s:

In 1964, Martin Cruz Smith (born Martin William Smith) graduated from the University of Pennsylvania with a BA in Creative Writing. After working as a journalist from 1965 to 1969, he turned to fiction. In 1971, he wrote Gypsy in Amber about NY gypsy art dealer Roman Grey and was nominated for an Edgar Award. Nightwing was his breakthrough novel and was made into a movie.

The best known of Smith’s works are the novels featuring Russian investigator Arkady Renko. The first of these, Gorky Park, was published in 1981 and was called a “thriller of the ’80s” by Time Magazine. The book became a bestseller and won the Gold Dagger Award from the British Crime Writers’ Association. He has also appeared in Polar Star, Red Square, Havana Bay, Wolves Eat Dogs, Stalin’s Ghost, and Three Stations.

More from the Author: https://amzn.to/3R1PAOY

“The most beautiful women in the world were African.”
― Martin Cruz Smith, Rose

“Wolves eat dogs.” That did seem to be the consensus of the village, Arkady thought. Roman shook his head as if he’d given the matter a lot of consideration. “Wolves hate dogs. Wolves hunt down dogs because they regard them as traitors. If you think about it, dogs are dogs only because of humans; otherwise they’d all be wolves, right? And where will we be when all the dogs are gone? It will be the end of civilization.”
― Martin Cruz Smith, Wolves Eat Dogs

“It was like a Russian party, Arkady thought. People got drunk, recklessly confessed their love, spilled their festering dislike, had hysterics, marched out, were dragged back in and revived with brandy. It wasn’t a French salon.”
― Martin Cruz Smith

“There are not many road signs in Russia, you know. He laughed. If you don’t know where the road goes, you shouldn’t be on it.”
― Martin Cruz Smith, Gorky Park

“Proust said that you could seduce any woman if you were willing to sit and listen to her complain until four in the morning.”
― Martin Cruz Smith, Gorky Park

“He never had been good at arguing with women; they tapped into pools of resentment over slights that had steeped for years.”
― Martin Cruz Smith, Tatiana

“Well, love was no fading violet; love was a weed that flourished in the dark. Has anyone ever explained it?”
― Martin Cruz Smith, Gorky Park

“Mystery books. I must read a hundred a year. . . I just wish some of them were harder to figure out.”
― Martin Cruz Smith, Gypsy in Amber

“Because normal human activity is worse for nature than the greatest nuclear accident in history.”
― Martin Cruz Smith

“The great thing about being a writer is that you are always re-creating yourself.”
― Martin Cruz Smith

“Stalin gothic was not so much an architectural style as a form of worship. Elements of Greek, French, Chinese and Italian masterpieces had been thrown into the barbarian wagon and carted to Moscow and the Master Builder Himself, who had piled them one on the other into the cement towers and blazing torches of His rule, monstrous skyscrapers of ominous windows, mysterious crenellations and dizzying towers that led to the clouds, and yet still more rising spires surmounted by ruby stars that at night glowed like His eyes. After His death, His creations were more embarrassment than menace, too big for burial with Him, so they stood, one to each part of town, great brooding, semi-Oriental temples, not exorcised but used.”
― Martin Cruz Smith, Gorky Park

More from the Author: https://amzn.to/3R1PAOY