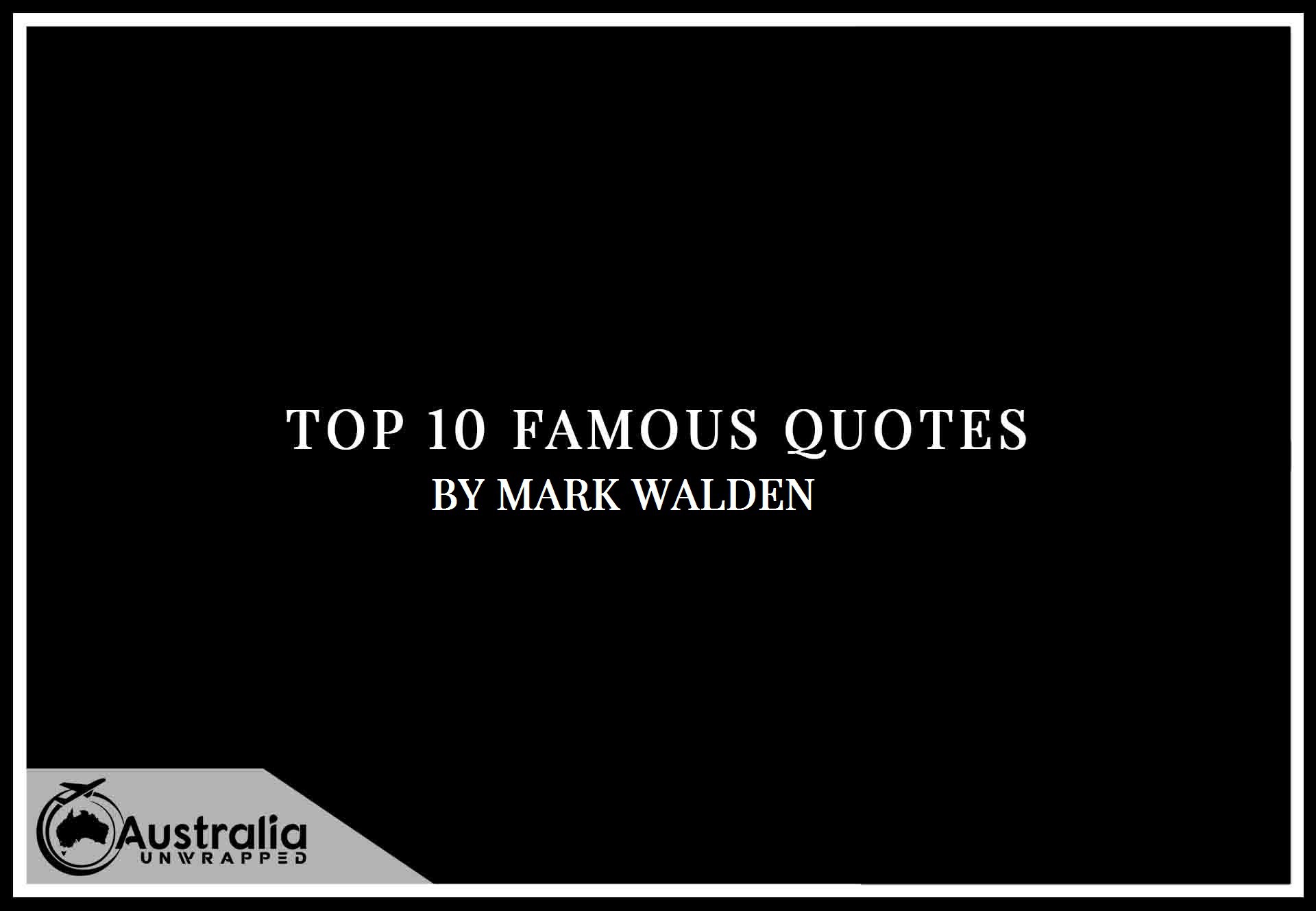 Quotes, who doesn’t love a good quote? This series of articles we look at Top 10 Famous Quotes by Author Mark Walden, author quotes are always a challenge and fun to pick, with Mark Walden you will find my Ten favorites of Mark Walden’s quotes.

I am the laziest man in the world. No…really. It’s not just a bit lax, it’s truly, deeply, breathtakingly lax. That’s why I’ve taken so long to get myself online.

I’m the author of the HIVE series of books which I hope some people who stumble upon this have already read and enjoyed. Or read and hated…

In my life, I have the pleasure of living with two of the most beautiful women in the world. Of course, I’m hoping they read that and forgive me for whatever I do this month that’s incredibly stupid. I have yet to hold down anything even vaguely approximating a proper job. As lazy as I am, making video games wasn’t the best environment for me.

More from the Author: https://amzn.to/3OyVQfr

“Keep an eye on that boy… he has potential”
― Mark Walden, H.I.V.E. Higher Institute of Villainous Education

“Perhaps they never left the island when construction was complete,” Otto replied.
Wing raised an eyebrow. “A true job for life.”
“Or a life for a job,” Otto countered. He wouldn’t be at all surprised, given the emphasis on total secrecy, if H.I.V.E. offered an “aggressive” retirement package for lower-level employees. Here, being fired was probably a term that was taken a little too literally.”
― Mark Walden, H.I.V.E. Higher Institute of Villainous Education

“Wing watched her leave and turned to Otto. ‘My father once told me that only the foolish man pulls on the tiger’s tail as it dangles from the tree.’ It was the first time that Otto had seen him smile.

Otto grinned at Wing. ‘True, but how else do you find out if it’s a tiger at all?”
― Mark Walden, H.I.V.E. Higher Institute of Villainous Education

“We have nothing to fear but fear itself,” Otto replied. “Oh, and a megalomaniacal headmaster, the world’s deadliets assassin, giant mutated plant monsters, an international cartel of supervillains, and the security forces of every country on earth, but other than that…just fear.”
― Mark Walden, The Overlord Protocol

“Do we get a bedtime story?” Otto asked cheekily. “Oh yes, of course. I think we’ll have one of my favorites; it’s called ‘The Little Boy and the Tranquilizer Gun.” Raven smiled in a rather unsettling way.”
― Mark Walden, The Overlord Protocol

“I’ll have to remember that for the future. When in a life-or-death battle, be sure to club unconscious everyone on your side as early on in the fight as possible,” Laura said, laughing.”
― Mark Walden, H.I.V.E. Higher Institute of Villainous Education

“Life at H.I.V.E. may have its attractions after all, Otto thought. Friends, as they say, may come and go, but high-powered laser weapons are forever.”
― Mark Walden, H.I.V.E. Higher Institute of Villainous Education

“Darkdoom? Darkdoom did this?” Nero was visibly surprised. He placed a hand on his forehead, rubbing his temples. “Oh, why is it always the bald ones?”
― Mark Walden, H.I.V.E. Higher Institute of Villainous Education

“I always say that it’s not really been a good day if you haven’t caused a major diplomatic incident by lunchtime,’ Otto said with a grin.”
― Mark Walden, Deadlock

“I’m sure that there must have been times when you have read books or watched films and found yourself secretly wishing for the villain to win. Why? Isn’t that against the rules by which our society lives? Why should you feel this way? It’s simple, really; the villain is the true hero of these tales, not the well-intentioned moron who somehow foils their diabolical scheme. The villain get’s all the best lines, has the best costumes, has unlimited power and wealth- why on earth would anyone not want to be the villain?”

More from the Author: https://amzn.to/3OyVQfr