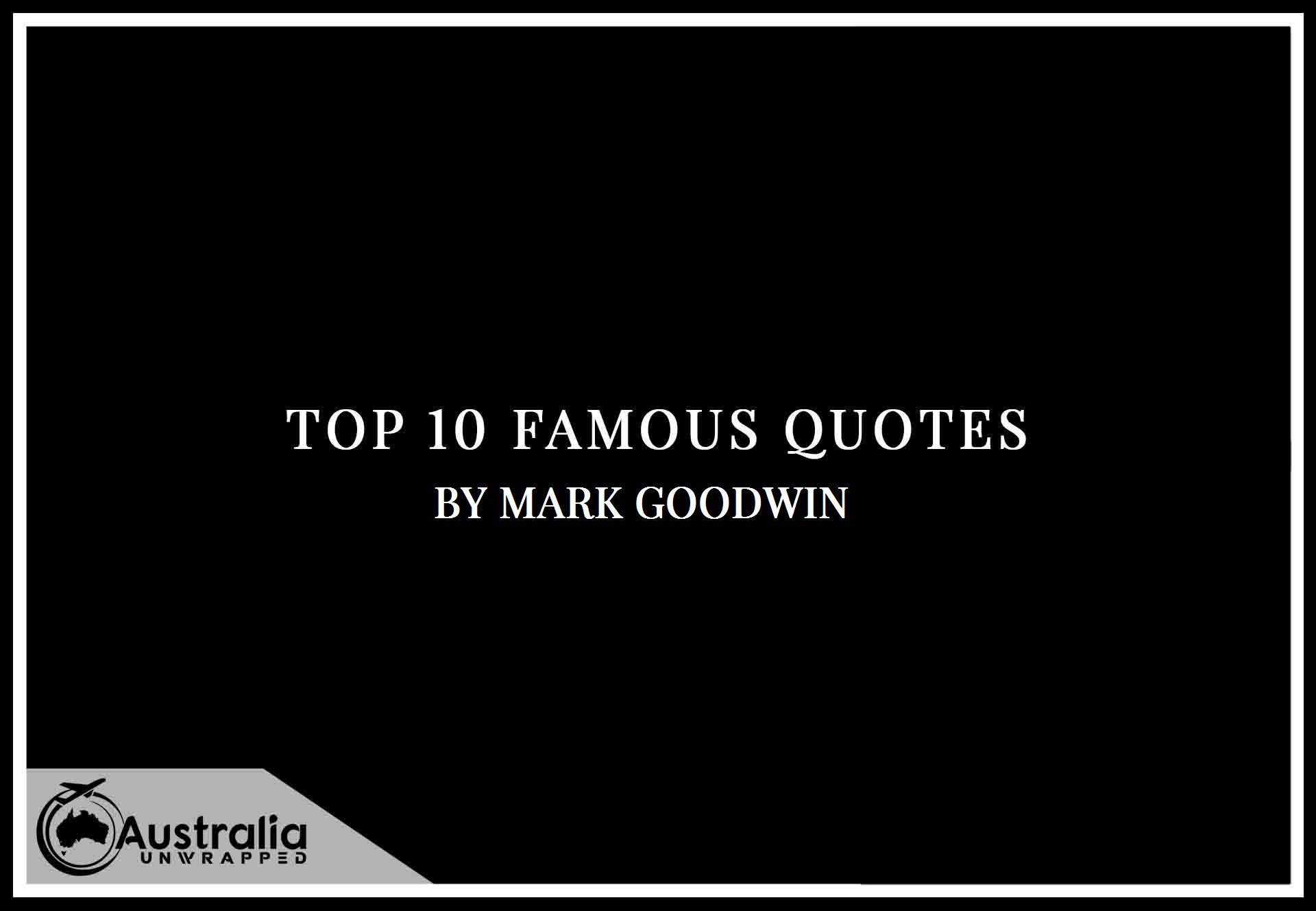 Quotes, who doesn’t love a good quote? This series of articles we look at Top 10 Famous Quotes by Author Mark Goodwin, author quotes are always a challenge and fun to pick, with Mark Goodwin you will find my Ten favorites of Mark Goodwin’s quotes.

Mark Goodwin is a Christian author and host of the Prepper Recon Podcast, in which he interviews patriots, preppers, and economists to help prepare for uncertain times. The Days of Noah, his previous fiction series, reached the top of Amazon’s best-selling list in multiple categories for several months. The Economic Collapse Chronicles, his first series, also hit several categories on Amazon’s best-seller list.

More from the Author: https://amzn.to/3NBdJt5

“By failing to prepare, you are preparing to fail.” -Benjamin Franklin”
― Mark Goodwin, American Meltdown

“THESE are the times that try men’s souls. The summer soldier and the sunshine patriot will, in this crisis, shrink from the service of their country; but he that stands it now, deserves the love and thanks of man and woman. Tyranny, like hell, is not easily conquered; yet we have this consolation with us, that the harder the conflict, the more glorious the triumph. What we obtain too cheap, we esteem too lightly: it is dearness only that gives everything its value. Heaven knows how to put a proper price upon its goods; and it would be strange indeed if so celestial an article as freedom should not be highly rated. Thomas Paine, The American”
― Mark Goodwin, Conspiracy

“The absence of a police state is that people are free, and if you don’t commit crimes you can do what you want. But today, you can’t open up a business, you can’t develop land, you can’t go to the bank, you can’t go to the doctor without the government knowing what you’re doing. They talk about medical privacy, that’s gone. Financial privacy, that’s gone. The right to own property, that’s essentially gone. So you have to get permission from the government for almost everything. And if that is the definition of a police state, that you can’t do anything unless the government gives you permission, we’re well on our way. Ron Paul”
― Mark Goodwin, Conspiracy

“If ye love wealth better than liberty, the tranquility of servitude better than the animating contest of freedom, go home from us in peace. We ask not your counsels or arms. Crouch down and lick the hands which feed you. May your chains set lightly upon you, and may posterity forget that ye were our countrymen.” -Samuel Adams”
― Mark Goodwin, American Exit Strategy

“Be courteous to all but intimate with few, and let those few be well tried before you give them your confidence; true friendship is a plant of slow growth, and must undergo and withstand the shocks of adversity before it is entitled to appellation.” – George Washington”
― Mark Goodwin, American Exit Strategy

“The true Republican Party began as the Jeffersonian-Republicans. Small government, state sovereignty, non-intervention and no federal bank that can tax the citizens through inflationary money creation to be spent on the profligate lifestyle of an obese state.”
― Mark Goodwin, American Exit Strategy

“When governments fear the people there is liberty. When the people fear the government there is tyranny.” -Thomas Jefferson”
― Mark Goodwin, American Exit Strategy

“To disarm the people is the best and most effectual way to enslave them.” -George Mason – Father of the Bill of Rights”
― Mark Goodwin, American Exit Strategy

“There are two ways to conquer and enslave a country. One is by the sword. The other is by debt.” -John Adams”
― Mark Goodwin, American Exit Strategy

“ ‘For I was hungry and you gave me something to eat, I was thirsty and you gave me something to drink, I was a stranger and you invited me in, I needed clothes and you clothed me, I was sick and you looked after me, I was in prison and you came to visit me. Then the righteous will answer him, ‘Lord, when did we see you hungry and feed you, or thirsty and give you something to drink? When did we see you a stranger and invite you in, or needing clothes and clothe you? When did we see you sick or in prison and go to visit you?’ The King will reply, ‘I tell you the truth, whatever you did for one of the least of these brothers of mine, you did for me.’” -Matthew 25: 35-40”

More from the Author: https://amzn.to/3NBdJt5