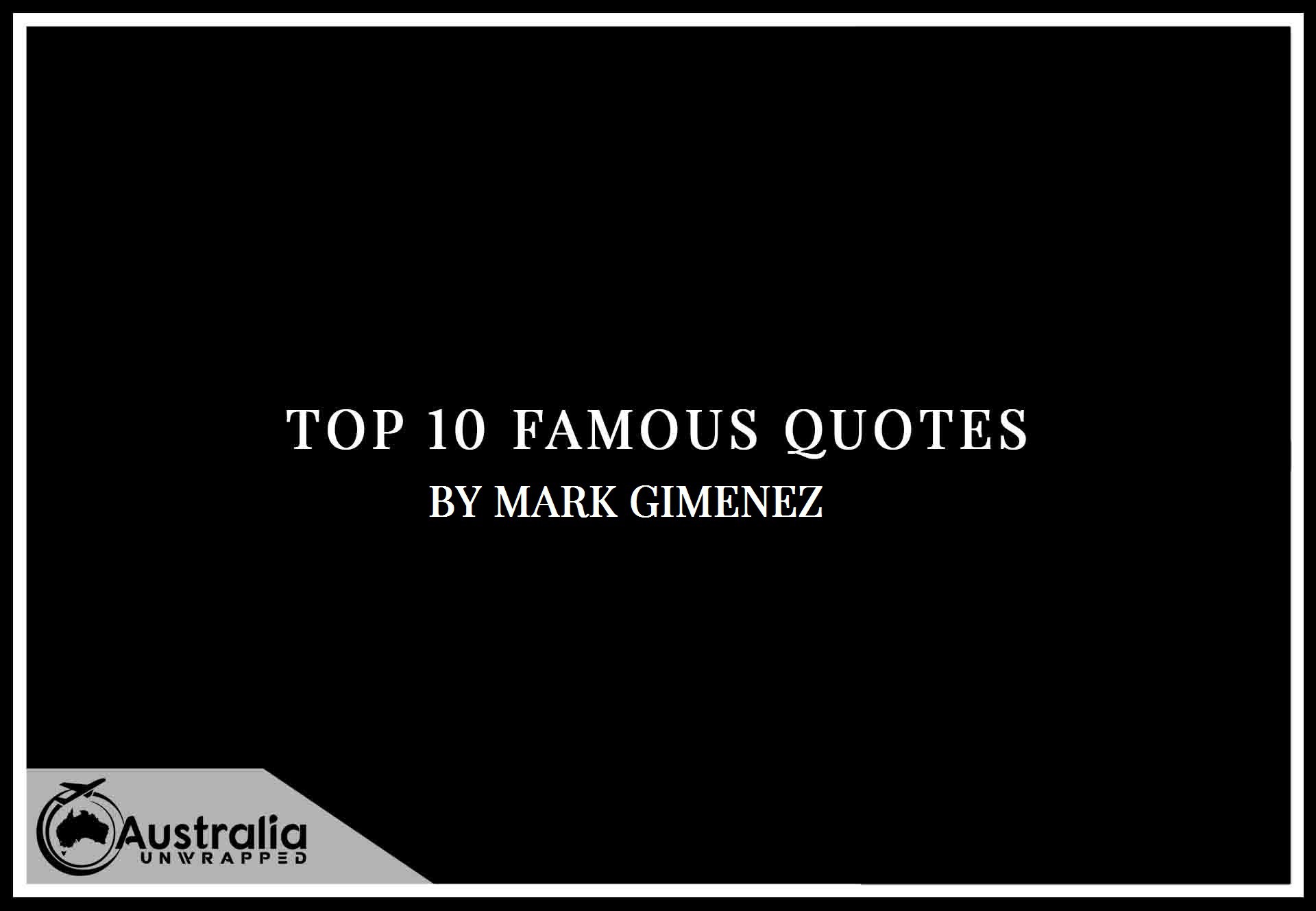 Quotes, who doesn’t love a good quote? This series of articles we look at Top 10 Famous Quotes by Author Mark Gimenez, author quotes are always a challenge and fun to pick, with Mark Gimenez you will find my Ten favorites of Mark Gimenez’s quotes.

Mark Gimenez grew up in Galveston County, Texas, and graduated from Texas State University and Notre Dame Law School. He practiced law and was a partner at a large Dallas firm. Author of ten novels — The Color of Law, The Abduction, The Perk, The Common Lawyer, Accused, The Governor’s Wife, Con Law, The Case Against William, The Absence of Guilt, and End of Days (Con Law II) — as well as a children’s book, Parts & Labor: The Adventures of Max Dugan. His books have received critical acclaim around the world. There have been fifteen foreign language translations of the books, and they have been bestsellers in the UK, Ireland, Australia, India, and South Africa. A spot for The Perk was awarded in Books to Die For: The World’s Greatest Mystery Writers on the World’s Greatest Mystery Novels, edited by John Connolly and Declan Burke.

More from the Author: https://amzn.to/3aap8Cb

“Maybe there’s no such thing as the truth. Maybe it’s all just a point of view,”
― Mark Gimenez, Con Law

“Quarterbacks today, they’re ripped. You ever see players at the combine meat market, standing up on stage in their skivvies so the owners and coaches can take a look?” “Uh, no. I haven’t. And I don’t want to.” Sam chuckled. “It is a bit strange, white team owners and coaches eyeballing these big black studs same way white plantation owners used to eyeball black slaves being sold on the docks in Galveston—I saw a show on cable about that, struck me—but difference is, these black players are going to make millions not pick cotton.”
― Mark Gimenez, The Case Against William

“when they fail at sports or school or life, it’s not because they didn’t work hard enough or they’re just not smart enough or good enough. No, they’re special, so it’s got to be someone else’s fault. They didn’t fail. Someone made them fail.”
― Mark Gimenez, The Case Against William

“mean and ruthless. But she was still a mother. And the most dangerous creature on earth is a mother whose child has been threatened, insulted, harassed, or bullied.”
― Mark Gimenez, The Abduction

“Yep. Quentin held him back in kindergarten and again in seventh grade so he’d have two extra years to get bigger. He did. Lots of dads do that now. Soon”
― Mark Gimenez, The Perk

“Are we rich?” “We’re comfortable.” He sometimes said things like that instead of yes or no. That’s how lawyers answer questions.”
― Mark Gimenez, The Case Against William

“she needed someone to hold her, but she couldn’t bring herself to ask her husband, not after what she had done to him.”
― Mark Gimenez, The Abduction

“marriage, children, illness, and death were life-changing events. Everything else was just ripples in the river.”
― Mark Gimenez, The Perk

“Now we’ve got an entire generation of fucked-up narcissists ’cause their mamas told them they’re special.”
― Mark Gimenez, The Case Against William

“People on TV talk about kids having no self-esteem. Complete bullshit. Kids today got self-esteems the size of fucking Wyoming. Self-esteem oozes from every pore on their bodies. They been told they’re special since the day they popped out of mama and a hundred times a day since. They believe it. They haven’t done a goddamn thing in their lives, but they know they’re special. So when they fail at sports or school or life, it’s not because they didn’t work hard enough or they’re just not smart enough or good enough. No, they’re special, so it’s got to be someone else’s fault. They didn’t fail. Someone made them fail. Now we’ve got an entire generation of fucked-up narcissists ’cause their mamas told them they’re special.”

― Mark Gimenez, The Case Against William

More from the Author: https://amzn.to/3aap8Cb