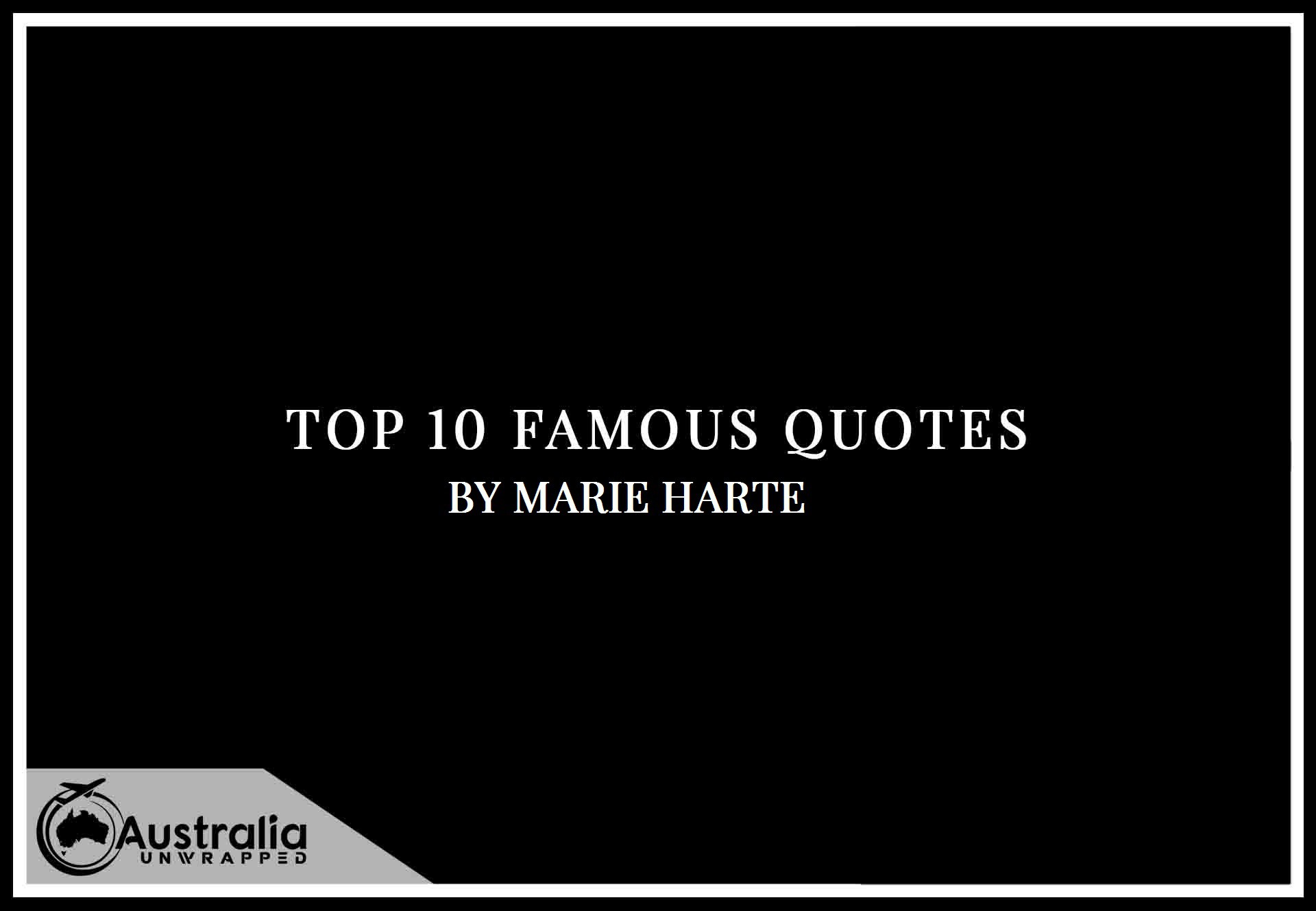 Quotes, who doesn’t love a good quote? This series of articles we look at Top 10 Famous Quotes by Author Marie Harte, author quotes are always a challenge and fun to pick, with Marie Harte you will find my Ten favorites of Marie Harte’s quotes.

A caffeine addict, boy referee, and romance lover, Marie Harte has written over 100 books, and there are more on the way. An avid reader and action movie fan, she confesses to being a bibliophile. Whether she’s hiking in Central Oregon, biking around town, or hanging at the local tea shop, she’s constantly plotting to make everyone happy.

More from the Author: https://amzn.to/3AjkrAE

“An orgasm — for all that ails you.

“Okay. Then I forgive you for being a complete shithead at the restaurant. It wasn’t your fault your ex thought she had the right to treat me like crap and embarrass me in front of the entire restaurant. I’m sure the bleach in her hair tampered with the space between her ears and tainted her limited ability to think. That or the weight of those implants made it hard to focus on anything but standing up straight.”
Derrick blinked. “That’s forgiveness ?”
“Do you have a problem with anything I just said ?”
“No, no. Not at all.”
― Marie Harte, Closing the Deal

“What the hell is he? Ace dodged another swing and countered by kicking his opponent in the chest hard enough that he snapped a rib bone. The rogue didn’t flinch. Studying the male, Ace had no idea what to make of him. Derrick, one of his team members, was African American. When changed, his skin took on a darker brown than his original shade. Ace had Native American ancestry, and when changed, looked more copper than brown. This creature… What the hell turned black?

“Zack stood, and Ace pulled him back to the bed. Zack landed with an oomph. “Sorry.” Ace tried to be gentle as he pushed Zack to lie straight, the way he’d suggested. “What the fuck?” Zack’s voice was muffled by the pillow Ace shoved under his face. “Just relax and enjoy. I’m not coming on to you, for Christ’s sake. I’m just trying to be nice. Accept it,” he barked, his glare fading when he felt Zack chuckle. “Ass.” Zack sighed and settled into the bed.

“The hunger in Ace’s brown eyes startled her. “Hell, I might get a medal for fucking you as hard as I have.” She blushed. She couldn’t help it. “Sorry. I should have said, for making love with you as hard as I have. Zack’s always on my ass not to curse in front of you.” She didn’t mention that “ass” was also a curse word. “He’s something of a gentleman, isn’t he?” “He likes to think so,” Ace said with a grin that quickly faded.

“You must be desperate if you’re asking Mom for adivce. Did she sit you down on the couch ?”
“I’m not a patient of hers, asswipe. I’m her favorite son.” Derrick ignored Gage’s huff. The little snot. (…)
“Favorite, my ass. She pities you. Gage is nothing more than a baby-maker. I’m the favorite.” Dylan preened, pulling at the cuffs on his designer shirt. “Culture, charm, good looks and a real occupation. What’s not to love”
― Marie Harte, Closing the Deal

“Seriously, why didn’t Brody or I know about the neighbors? It’s not like I’m a dog. I’m not going to hump them in public.” At Mike’s look, he flushed. “For God’s sake, I was twenty years old and drunk. The girl wasn’t even real. It was a mannequin and it was all Brody’s idea.”
― Marie Harte, The Troublemaker Next Door

“You know,sometimes when people leave us,they leave big holes in our hearts.Some people talk about those holes all the time,hoping words will close them up.Other people pretend the hole aren’t there,so that maybe they’ll heal if they aren’t bothered with so much”
― Marie Harte, What to Do with a Bad Boy

“Zoe didn’t do public displays of affection, and she sure as hell didn’t roll around on the floor with an aroused hottie who felt like he had a ten-foot pole in his pants. Where the hell had he been hiding that thing, anyway?”
― Marie Harte, Just the Thing

“She deleted the messages he continued to leave on her phone and set her ringer to identify his calls – what she should have done a week ago. The minute Loser by Beck played, she’d know it was him.”
― Marie Harte, Closing the Deal

“He pulled back and stared at the lust gathered on Zack’s face. “You want me to leave with you.” “What? Yes. Yes, we need to go,” Zack said hoarsely. “Okay, but first I need you to do something for me.” “Sure.” It gratified him that Zack still couldn’t catch his breath. “Put your hands behind you, flat on the counter. Don’t move them, no matter what I do.” Zack frowned. Ace sighed. He was as bad at seducing men as he was at seducing women. Look how he constantly fucked up with Kelly. “Look, I have some questions. I need to see if I can handle you… us.” Understanding — or was that hope? — lit Zack’s gray eyes. “Just put my hands like this?” He placed his hands palm down on the laminate countertop. In doing so, he thrust his chest forward, his massive pecs impressive to anyone with a pulse. “Good,” Ace said gruffly. “Now shut up and don’t move.” “Typical,” Zack muttered with humor.

More from the Author: https://amzn.to/3AjkrAE