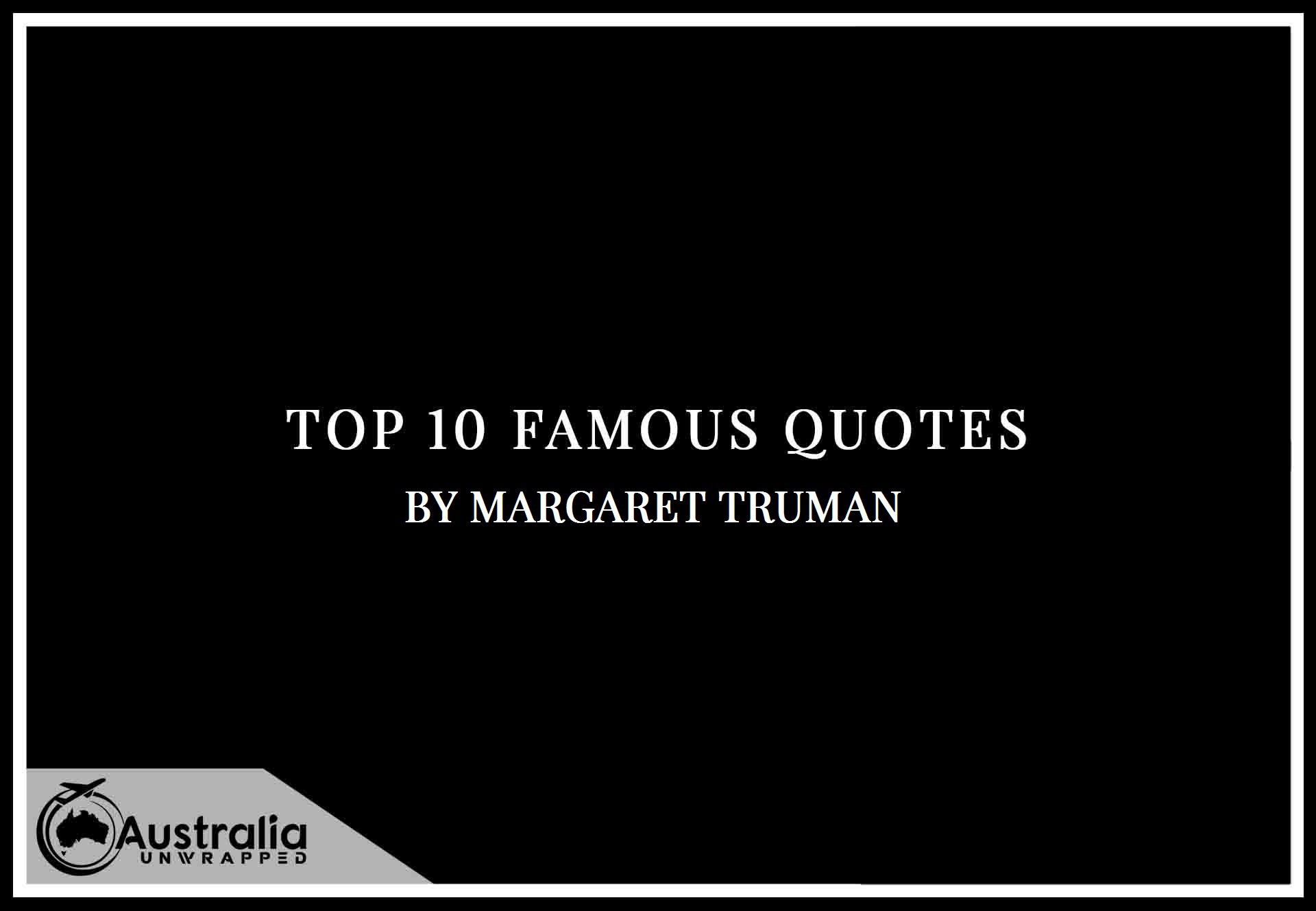 Quotes, who doesn’t love a good quote? This series of articles we look at Top 10 Famous Quotes by Author Margaret Truman, author quotes are always a challenge and fun to pick, with Margaret Truman you will find my Ten favorites of Margaret Truman’s quotes.

The American singer and writer Mary Margaret Truman-Daniel (February 17, 1924 – January 29, 2008), was widely known as “Margaret Truman”. She was the only child of Harry S. Truman (33rd President of the United States) and Bess Truman.

As a child, she was called Margaret, but was christened Mary Margaret Truman (after her aunt Mary Jane Truman and maternal grandmother Margaret Gates Wallace).

Truman christened the battleship USS Missouri in 1944, which was named after her home state (when the ship was recommissioned in 1986, she spoke at the ceremony).

More from the Author: https://amzn.to/3yF4i7m

“I love books. I really, really love them. There’s something special about bringing people and books together”
― Margaret Truman, Murder at the Library of Congress

“I believe in the brotherhood of man, not merely the brotherhood of white men but the brotherhood of all men before the law. . . . In giving the Negro the rights which are theirs we are only acting in accord with our ideals of a true democracy. . . . The majority of our Negro people find but cold comfort in shanties and tenements. Surely, as free men, they are entitled to something better than this. . . . It is our duty to see that the Negroes in our locality have increased opportunities to exercise their privilege as free men.” With these words, my father was saying what he truly believed.”
― Margaret Truman, Harry Truman

“Dad was not enjoying himself very much either, as is evident from this comment to his mother and sister: “We had a nice time at the Fair if you can call it a nice time to be followed around by thirty newsmen and photographers everywhere and to be mobbed every time an appearance is made . . . I had to ride in an open car and give ‘em a Cheshire Cat grin and almost freeze stiff but the onlookers seemed to enjoy it.” From the fair Dad drove to Reelfoot Lake”
― Margaret Truman, Harry Truman

“George Elsey put it succinctly: “You can’t sit around and wait for public opinion to tell you what to do. In the first place there isn’t any public opinion. The public doesn’t know anything about it; they haven’t heard about it. The President must decide what he is going to do and do it, and attempt to educate the public to the reasons for his action.”
― Margaret Truman, Harry Truman

“But they are not risks of our own making, and we cannot make the danger vanish by pretending that it does not exist. We must be prepared to meet that danger with sober self-restraint and calm and judicious action if we are to be successful in our leadership for peace.”
― Margaret Truman, Harry Truman

“Dad once defined leadership as the art of persuading people to do what they should have done in the first place. If they bullheadedly refuse to take this advice, there is not much the leader can do, in a free society.”
― Margaret Truman, Harry Truman

“and what to do with Mr. Prima Donna, Brass Hat, Five Star MacArthur. He’s worse than the Cabots and the Lodges – they at least talked with one another before they told God what to do. Mac tells God right off.”
― Margaret Truman, Harry Truman

“The Congress ran off and left everything just as I expected they would do and now they are trying to blame me because they did nothing. I just don’t believe people can be fooled that easily.”
― Margaret Truman, Harry Truman

“Well all the President is, is a glorified public relations man who spends his time flattering, kissing and kicking people to get them to do what they are supposed to do anyway.”
― Margaret Truman, Harry Truman

“It was said in the First World War that the French fought for their country, the British fought for freedom of the seas, and the Americans fought for souvenirs.”
― Margaret Truman, Harry Truman

“I am obligated to the Big Boss, a man of his word, but he gives it very seldom and usually on a sure thing. But he is not a trimmer. He, in times past, owned a bawdy house, a saloon and gambling establishment, was raised in that environment, but he’s all man. I wonder who is worth more in the sight of the Lord? I am only a small duck in a very large puddle, but I am interested very deeply in local or municipal government. Who is to blame for present conditions but sniveling church members who weep on Sunday, play with whores on Monday, drink on Tuesday, sell out to the Boss on Wednesday, repent about Friday, and start over on Sunday. I think maybe the Boss is nearer Heaven than the snivelers.”

More from the Author: https://amzn.to/3yF4i7m