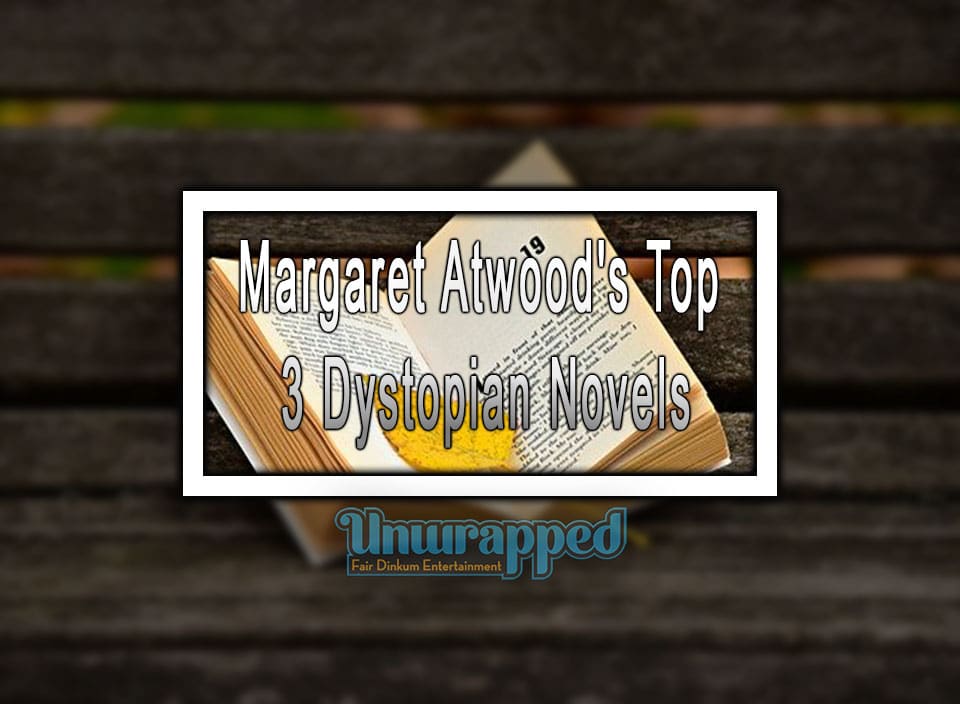 Margaret Atwood is another one of my favourite authors with a brilliant mind. She has a wide array of works like The Blind Assassin, Cat’s Eye, The Circle Game and many others. My love for dystopian literature is superbly stimulated by her top writing skills. One of my favourites, A Handmaid’s Tale was portrayed in opera performance and in 1990 turned into a film. In 2017, A Handmaid’s Tale became a TV miniseries. Other books she penned also became film adaptations including the dystopian The MaddAddam trilogy. She the books that I highly recommend which were a difficult choice to make, believe me!

As one of Margaret Atwood’s top dystopian novels or maybe even the best, she said that the inspiration for The Handmaid’s Tale comes from other dystopian literature which she read during the 1950s and the 1960s. This includes her favourites like Brave New World from Aldous Huxley and 1984 written by George Orwell.
In her own words she says that as soon as you love to read a genre, as an author, you will continue to have a desire to do your own work in that genre. The Handmaid’s Tale was published in 1985 about a dystopian America where women’s rights were taken away and they lose the right to own property or to work.
It is a tale where they are valued and then become the property and under the control of wealthy families to bear children for barren women. With birth rates plunging after environmental disasters the leaders of the state of Gilead strip women of their rights and they become the state’s property.
In a bid to repopulate the world, the women are forced to repopulate the world. The story is told through one of the women, Offred known as a Handmaid. The Handmaids have only two choices, work and die in radioactive colonies or produce a baby. It is a near-future dystopian novel about the former United States that is renamed as the Republic of Gilead.

Margaret Atwood creates a much more horrifying and darker dystopian future with Oryx and Crake than The Handmaid’s Tale can dream to be. It is a grim pre-apocalyptic world where the elite stays in gated compounds and the rest of humanity in a society filled with pornographic content and violence.
Immensely powerful biotech organisations rule society and in their world, only technical capability is valued and they arrogantly create life only to experiment on it. Pharmaceuticals are behind the end of the world and it wasn’t done by accident either. Jimmy, as he was previously known, is now called Snowball and he mourns the loss of Crake, his best friend and also Oryx, the beautiful girl that both Crake and Snowball loved.
Snowball seeks answers while also keeping a watchful eye over the genetically engineered Crakers while fulfilling a promise the person responsible for the world’s destruction. Oryx and Crake were published in 2003

3. The Year of the Flood

The Year of the Flood which was published in 2009 was a surprise to Atwood fans as she published it as Oryx and Crake’s sequel. The book finished on a complete note, but after a couple of pages, you notice that so much and so many things were left unexplored in the previous book. With the apocalypse revisited the focus of The Year of the Flood are concentrating on the catastrophe, friendships, religion and declining future and the poor that struggles to survive. The Year of the Flood revisits and elaborate on several characters mentioned in Oryx and Crake specifically the Pleeblands’ lower classes. Much of the story follows Ren and Toby, Ren who is a prostitute and trapeze dancer working at a brothel and survived the plague while in the brothel’s biohazard containment chamber. Ren was also in love with the main protagonist in Oryx and Crake, Snowman.

Buy Now : The Year of the Flood

These are my recommended top 3 Dystopian Novels of Margaret Atwood that you should read first. However, do not neglect to read The MaddAddam Trilogy after you read Oryx and Crake followed by the Year of the Flood. The final in her trilogy which wasn’t intentional as each one of the previous books can be read on its own, you will miss out on her brilliant combination and conclusion. Also include The Testaments, which is released in September 2019, which is the sequel to the magnificent dystopian novel, A Handmaid’s Tale.