Here are the Sights of a 30-Minute City -Malcolm Turnbull 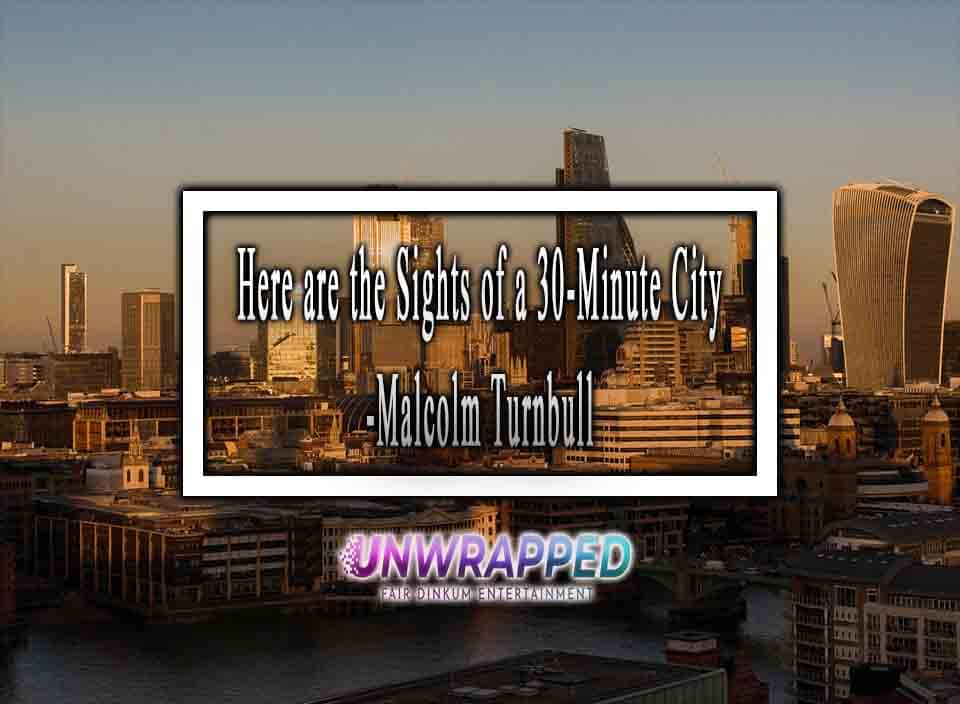 Malcolm Turnbull – 30 Minute City – Imagine living in a major city like Sydney that is so well designed, everyone can travel to work in 30 minutes. You may think that’s only a luxury the rich can afford, and it will never happen!

The Australian Prime Minister Malcolm Turnbull,  has announced a new funding scheme for major infrastructure programmers; no longer will there be a carte blanche, it will be based on future growth potential, contribution to society and improving everybody’s lives.

The Prime Minister has emphasized the benefits of a “30-minute city” in explaining his approach to cities and urban transportation.

Central to this policy will be increased public transport, availability of cycle lanes and walking paths, and will discourage use of private car. Locals should be able to access essential destinations safely within 30 minutes, including hospitals, schools, shops etc.

Social Media Response to the plan by Malcolm Turnbull – 30 Minute City, in principle the idea is wonderful, and some would argue that before the private motor car was heavily marketed that this is the direction cities where headed.

Committee for Sydney advocate inclusion and a brighter society based on togetherness, it is a real possibility that having a well integrated #smartcitiesplan will encourage social cohesion and collaboration.

Kristy Mayr highlights that as technology changes, society should move with it to take advantage of the new opportunities, good to see a strong support for public infrastructure

Jack Archer highlights the potential for local people to collaborate, and take the lead in effective and targeted spending on life improving infrastructure.

Interesting Video from The University of Melbourne reviewing the advantages of city planning and smart inclusive innovations in public transport, while also exploring potential challenges in already established cities.

Enjoy: Top 10 Pubs to Visit in Australia Before You Die

No doubt that a effective Smart City Plan can benefit all in Australia, and indeed could yield a new era of prosperity, however vanity projects like Canberra’s light rail, which will only serve a minority of the Canberra population need to be consigned to the dustbin of history. We need inclusive, well planned, well modeled city infrastructures that improve the life of all locals.

As Shahana states they must include green areas for recreation and community togetherness.

The potential benefits to 15 million Australians who  live in capital cities is immense, these people contribute a significant 80% of GDP, and need a infrastructure, lifestyle and working conditions that ensure productive labor, improved quality of life and a safe, well planned, family friendly environment. The Malcolm Turnbull – 30 Minute City may be talk for now, but with collaboration, and positive re-enforcement by the States it has the potential to be something amazing.

.@TurnbullMalcolm 'we're social animals & we're at our most creative & productive with others. That's why cities are vital' #smartcitiesplan

The #SmartCitiesPlan will position our cities to succeed in the 21st Century economy https://t.co/KV4tgr0pE8

Romantic Places In Adelaide To Visit For Couples!

Five Destinations For Family Travel in 2022

Top Reasons Why Water Pipes Leak on the Gold Coast