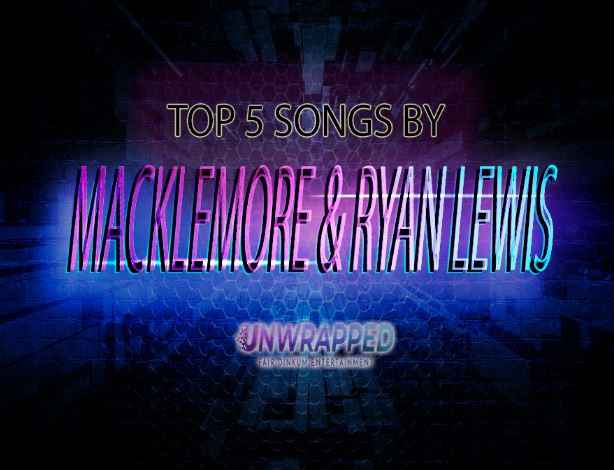 We know how excited you are to be swept away by music through Macklemore & Ryan Lewis‘ Top 5 Tracks. Australian Unwrapped would like to give you first a glimpse of the life of the artist. Enjoy reading and listening!

All about Macklemore & Ryan Lewis

Who are Macklemore & Ryan Lewis: Rapper Macklemore and DJ and record producer Ryan Lewis formed the American hip hop duo Macklemore & Ryan Lewis, in 2008. VS. EP was their first released album in 2009 followed by VS. Redux (2010), then The Heist (2012) and This Unruly Mess I’ve Made in 2016. Their hit single “Thrift Shop” released in 2013 made it to US Billboard Hot 100 Top 1 rank while “Can’t Hold Us” was their second hit song that made it to the top 1 of the same chart. With this, they were the first duo to have their first two singles the number 1 spot in the chart’s history. The Heist was released in October 2012 which received a Grammy Award and recognized to reach the US Billboard 200 Top 2 spot.

Macklemore gave Michael Wansley who was working a desk job at Microsoft, a break for a collaboration.
Ryan attended ‘Ferris High School’ in Spokane, Washington, and played the guitar at a young age in rock bands.
Ryan eventually graduated from ‘Roosevelt High School’ in Seattle, Washington and then majored in ‘Comparative History of Ideas’ from the ‘University of Washington’.

I went to the Moped store, said fuck it
Salesman’s like what up, what’s your budget?
And I’m like honestly, I don’t know nothing about Mopeds
He said I got the one for you, follow me
Ooh, it’s too real
Chromed out mirror, I don’t need a windshield
Banana seat, a canopy on two wheels
Eight hundred cash, that’s a hell of a deal
I’m headed downtown, cruising through the alley
Tip-toeing in the street like Dally
Pulled up, moped to the valley
Whitewalls on the wheels like mayonnaise
Dope, my crew is ill, and all we need is two good wheels
Got gas in the tank, cash in the bank
And a bad little mama with her ass in my face
I’mma lick that, stick that, break her off, Kit-Kat
Snuck her in backstage, you don’t need a wristband

When I was in the 3rd grade
I thought that I was gay
Cause I could draw, my uncle was
And I kept my room straight
I told my mom, tears rushing down my face
She’s like, “Ben you’ve loved girls since before pre-K”
Trippin’, yeah, I guess she had a point, didn’t she
A bunch of stereotypes all in my head
I remember doing the math like
“Yeah, I’m good at little league”
A pre-conceived idea of what it all meant
For those who like the same sex had the characteristics
The right-wing conservatives think its a decision
And you can be cured with some treatment and religion
Man-made, rewiring of a predisposition

I wanna be free, I wanna just live
Inside my Cadillac, That is my shit
And I throw it up (I throw that up)
That’s what it is (that’s what it is)
In my C.A.D.I.L.L.A.C bitch (biatch)
Can’t see me through my tints (nah ah)
I’m riding real slow (slow motion)
In my paint wet drippin shorty like my 24’s
(Umbrella)
I ain’t got 24’s (no oh)
But I’m on those Vogues
That’s those big white walls, round them hundred spokes
Old school like Olde English in that brown paper bag
I’m rolling in that same whip that my granddad had
Hello haters, Damn y’all mad

I hope you enjoyed listening to Macklemore & Ryan Lewis !