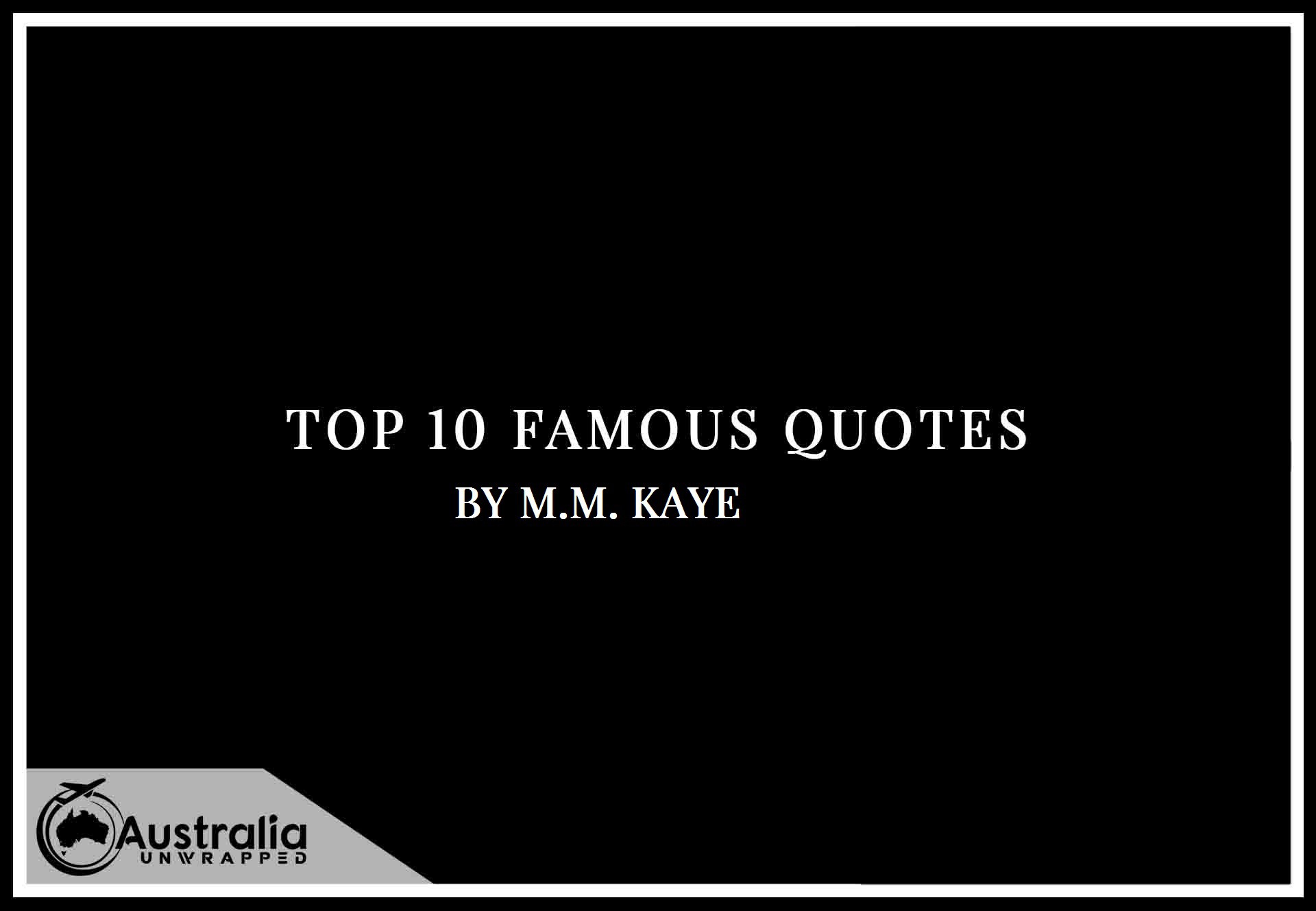 Quotes, who doesn’t love a good quote? This series of articles we look at Top 10 Famous Quotes by Author M.M. Kaye, author quotes are always a challenge and fun to pick, with M.M. Kaye you will find my Ten favorites of M.M. Kaye’s quotes.

M. M. Kaye (Mary Margaret) was born in India and spent a majority of her young married life there. She has strong family ties with the country: her grandfather, father, brother, and husband all served in the British Raj. In the years following India’s independence, her husband, Major-General Goff Hamilton of Queen Victoria’s Own Corps of Guides (the famous Indian Army regiment featured in The Far Pavilions) joined the British Army and M. M. Kaye followed the drum to Kenya, Zanzibar, Egypt, Cyprus and Germany.

More from the Author: https://amzn.to/3An5gqa

“Lavender’s blue,
Rosemary’s green,
When you are king,
I shall be queen”
― M.M. Kaye, The Ordinary Princess

“India and its peoples; not the British India of cantonments and Clubs, or the artificial world of hill stations and horse shows, but that other India: that mixture of glamour and tawdriness, viciousness and nobility. A land full of gods and gold and famine. Ugly as a rotting corpse and beautiful beyond belief …”
― M.M. Kaye, The Far Pavilions

“They rode out together from the shadows of the trees, leaving the Bala Hissar and the glowing torch of the burning Residency behind them, and spurred away across the flat lands towards the mountains…
And it may even be that they found their Kingdom.”
― M. M. Kaye, The Far Pavilions

“…for though she was ordinary, she possessed health, wit, courage, charm, and cheerfulness. But because she was not beautiful, no one ever seemed to notice these other qualities, which is so often the way of the world.”
― M.M. Kaye, The Ordinary Princess

“I cannot see anything admirable in stupidity, injustice and sheer incompetence in high places, and there is too much of all three in the present administration.”
― M.M. Kaye, The Far Pavilions

“for the public, it seemed, preferred to believe that which disturbed it least and to ignore troublesome information. Which is a failing common to all nations.”
― M.M. Kaye, The Far Pavilions

“It is not an easy thing to be a woman and love with the whole heart: which men do not understand — having many loves, and delighting in danger and war.”
― M.M. Kaye

“If a man does not keep pace with his companions, perhaps it is because he hears a different drummer: let him step to the music that he hears.”
― M.M. Kaye, The Far Pavilions

“Common sense will nearly always stand you in better stead than a slavish adherence to the conventions.”
― M.M. Kaye, Shadow of the Moon

So there you have it my Ten favorite quotes by M.M. Kaye, please comment below and share your favorite quotes by the fantastic author M.M. Kaye.  Furthermore, if you find any Authors not covered for there, top 10 quotes let me know and I will review their works and find some of their best quotes as has been done here for M.M. Kaye.

“This story was written many moons ago under an apple tree in an orchard in Kent, which is one of England’s prettiest counties . . . I had read at least twenty of the [fairy tales] when I noticed something that had never struck me before–I suppose because I had always taken it for granted. All the princesses, apart from such rare exceptions as Snow White, were blond, blue-eyed, and beautiful, with lovely figures and complexions and extravagantly long hair. This struck me as most unfair, and suddenly I began to wonder just how many handsome young princes would have asked a king for the hand of his daughter if that daughter had happened to be gawky, snub-nosed, and freckled, with shortish mouse-colored hair? None, I suspected. They would all have been of chasing after some lissome Royal Highness with large blue eyes and yards of golden hair and probably nothing whatever between her ears! It was in that moment that a story about a princess who turned out to be ordinary jumped into my mind, and the very next morning I took my pencil box and a large rough-notebook down to the orchard and, having settled myself under an apple tree in full bloom, began to write . . . the day was warm and windless and without a cloud in the sky. A perfect day and a perfect place to write a fairy story.”

More from the Author: https://amzn.to/3An5gqa