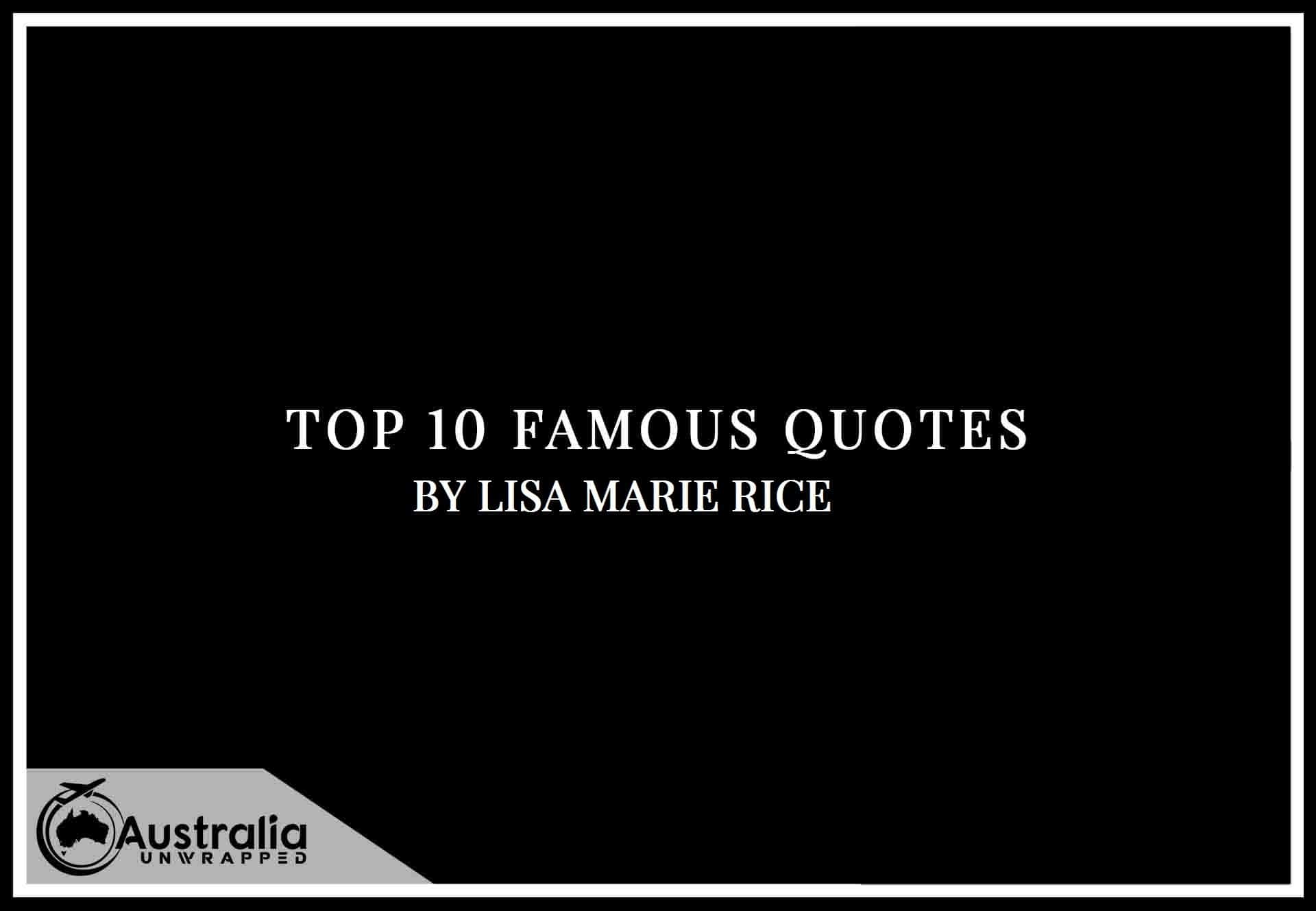 Lisa Marie Rice, a writer whom I am guessing you love? Here are our 10 best Lisa Marie Rice quotes for you to enjoy. At Australia Unwrapped we believe every book has at least one quotable line, and our mission is to find them all. Here you will find Lisa Marie Rice’s top 10 popular and famous quotes. Like every good writer Lisa Marie Rice made a number of memorable quotes, here are some of our favorites:

More from the Author: https://amzn.to/3Pd53dE

“She stepped closer to him, closer still, until her breasts touched his jacket, watching his eyes all the time. “My darling Jack.” She lifted herself up on tiptoe and awkwardly kissed the side of his mouth. “I’m yours. You know that.”
His control broke. His hands fisted in her hair and he kissed her hard, almost savagely. He knew he was bruising her mouth but he couldn’t stop himself. It was as if her mouth were giving him life. He would stay alive as long as he was kissing her.”
― Lisa Marie Rice, Hot Secrets

“They had a fabulous sex life. Drake was an attentive, tender lover who took his time in pleasing her. But every once in a while something in him changed and she caught a glimpse of the truly dangerous man he really was. She hadn’t tamed him, not one bit. He just chose to show her a tender side he said he’d only discovered with her.
But sometimes the tiger in him growled and clawed its way to the surface. And then the sex was incandescent.”
― Lisa Marie Rice, Reckless Night

“Okay. I don’t know how we’re going to do this. If I’m not in you inside of five minutes, I’m going to die. My heart will simply explode, and it won’t be pretty. But the thing is this – I haven’t had sex in a couple years, which creates two problems. One, I don’t have any condoms. If I had any condoms in some drawer somewhere, they’d be powder by now. And two, I can’t promise to pull out because I’m going to come the second I’m in you.”
― Lisa Marie Rice, Hotter Than Wildfire

“She would never tell him and was ashamed to admit it, even to herself, but she’d fallen in love with him the instant she’d seen him. She’d been taken at gunpoint to the alleyway outside a gallery showing her paintings and had seen a powerful man, not tall but immensely broad. He was facing three armed thugs and he hadn’t looked frightened at all.
He’d looked dangerous.
And she’d fallen.”
― Lisa Marie Rice, Reckless Night

“Mike felt a tug somewhere in his chest he didn’t ever remember feeling, like someone was pulling at a hook. They were going to take care of this lovely woman. Keep her safe, take her away from danger. And then, well—forget about beating the guy up. Mike was going to find the fuckhead who’d hurt her and kill him.”
― Lisa Marie Rice, Nightfire

“Julia edged closer, wondering what kind of vocabulary dogs understood. Frederico Fellini, her cat, was an intellectual and she could talk about books and films to him, as long as it was after he’d been fed, and fed well. She had the vague notion that dogs preferred football and politics.”
― Lisa Marie Rice, Woman on the Run

“He couldn’t wait—not one second more—and entered her with one long hard thrust. He was so careful with her, always, but this time he couldn’t be careful, couldn’t be gentle; he needed to possess her the way he needed to breathe.”
― Lisa Marie Rice, Hot Secrets

“Watercress. Jesus. He knew every gun that had ever been manufactured. Every hold in every martial art. This was beyond him. What the fuck was watercress?”
― Lisa Marie Rice, Dangerous Passion

“Pandora’s box had been opened and monsters had come out. But there had been something hidden at the bottom of Pandora’s box. Something wonderful.

“Fuck.” His voice was the merest whisper. He turned his head, eyes bleak. “I can’t do this, Suzanne. I can’t give you up to them.”

“You have to.” Her heart was cracking open. There was no question of holding back the tears now. “You have no choice.”

They moved at the same time. She launched herself into his arms at the same moment he opened them to haul her onto his lap. They kissed, violently, hungrily, a meeting of lips and tongue and tears. Her tears. He wasn’t crying, but she could feel his muscles tense as rocks beneath her hands.

He was holding the back of her head tightly, while eating at her mouth, as if he could fuse them at the lips. His tongue was deep in her mouth. She’d take the taste of him to her grave.

“Don’t go, goddammit. Stay with me.” His voice was thick and gravelly. The words came out between biting kisses. “I. Can’t. Stand. To. Let. You. Go.”
― Lisa Marie Rice

More from the Author: https://amzn.to/3Pd53dE