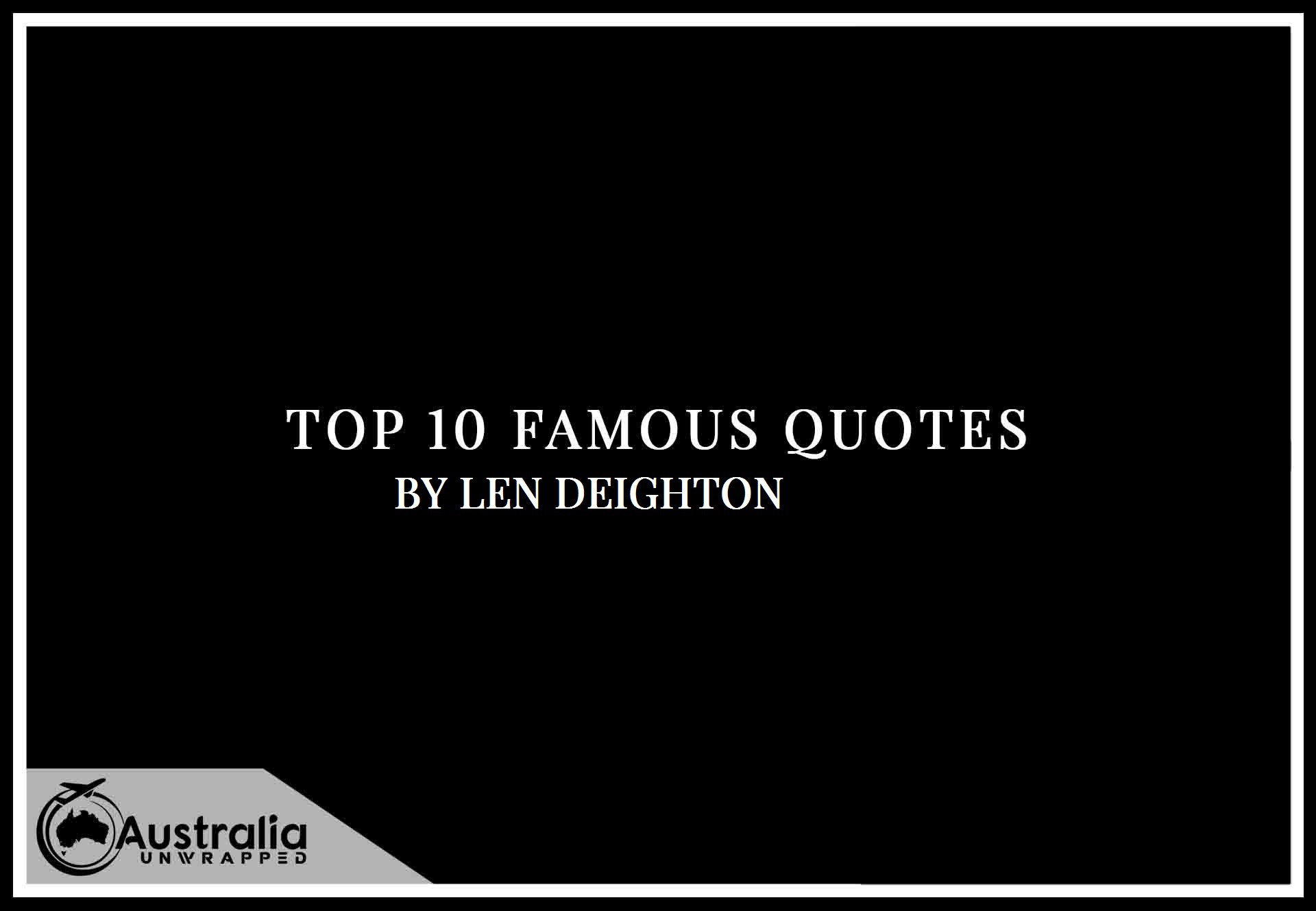 Len Deighton, a writer whom I am guessing you love? Here are our 10 best Len Deighton quotes for you to enjoy. At Australia Unwrapped we believe every book has at least one quotable line, and our mission is to find them all. Here you will find Len Deighton’s top 10 popular and famous quotes. Like every good writer Len Deighton made a number of memorable quotes, here are some of our favorites:

Deighton was born in 1929 in Marylebone, London. His father worked as a mechanic and chauffeur, and his mother as a part-time cook. After graduating from high school, Deighton became a railway clerk before serving his National Service as a photographer for the Royal Air Force’s Special Investigation Branch. He studied art at St Martin’s School of Art in London after being discharged from the RAF, and in 1952 won a scholarship to the Royal College of Art.

Deighton worked as an airline steward with BOAC. He worked as an illustrator in New York before becoming a writer and, in 1960, an art director in a London advertising agency. He is credited with designing the first British cover for On the Road by Jack Kerouac. Since that time, he’s illustrated a number of books about military history using his drawing skills.

More from the Author: https://amzn.to/3NQub8A

“Here in Prague they say that although the traffic police are communists the drivers are fascists, which would be all right if it were not that the pedestrians are anarchists.”
― Len Deighton, Funeral in Berlin

“England’s civil war had ended in a consensus as the English discovered that they hated foreigners more than they hated their own countrymen.”
― Len Deighton, Blood, Tears and Folly: An Objective Look at World War II

“He had a long thin nose, a moustache like flock wallpaper, sparse, carefully combed hair, and the complexion of a Hovis loaf.”
― Len Deighton, The Ipcress File

“What Douglas had once seen as the attractive over-confidence of youth, now looked more like unyielding selfishness.”
― Len Deighton

“When they ask me to become president of the United States I’m going to say, “Except for Washington D.C.”
― Len Deighton, Spy Hook

“Capitalism is the exploitation of man by man. Yes? Well socialism is exactly the reverse.”
― Len Deighton, The Harry Palmer Quartet

“Perhaps all fear is worse than reality, just as all hope is better than fulfilment.”
― Len Deighton, Berlin Game

“Do you ever make silly mistakes? It is one of my very few creative activities.”
― Len Deighton

“That was one of the problems of marrying into wealth; there were no luxuries.”
― Len Deighton, Berlin Game

Quotes for all, here you found our selection of 10 Len Deighton quotes. Make sure you help by commenting your best Len Deighton quote below and sharing our favorite authors so we can look them up, read some of their works and give you the best quotes we can find. We hope you enjoyed our top 10 quotes by Len Deighton. However, feel free to comment below if you disagree or would like to include some other great and memorable Len Deighton quotes in our list.

“It doesn’t take much to make the daily round with one’s employer work smoothly. A couple of ‘yessirs’ when you know that ‘not on your life’ is the thing to say. A few expressions of doubt about things you’ve spent your life perfecting. Forgetting to make use of the information that negates his hastily formed but deliciously convenient theories. It doesn’t take much but it takes about 98.5 per cent more than I’ve ever considered giving”
― Len Deighton

More from the Author: https://amzn.to/3NQub8A