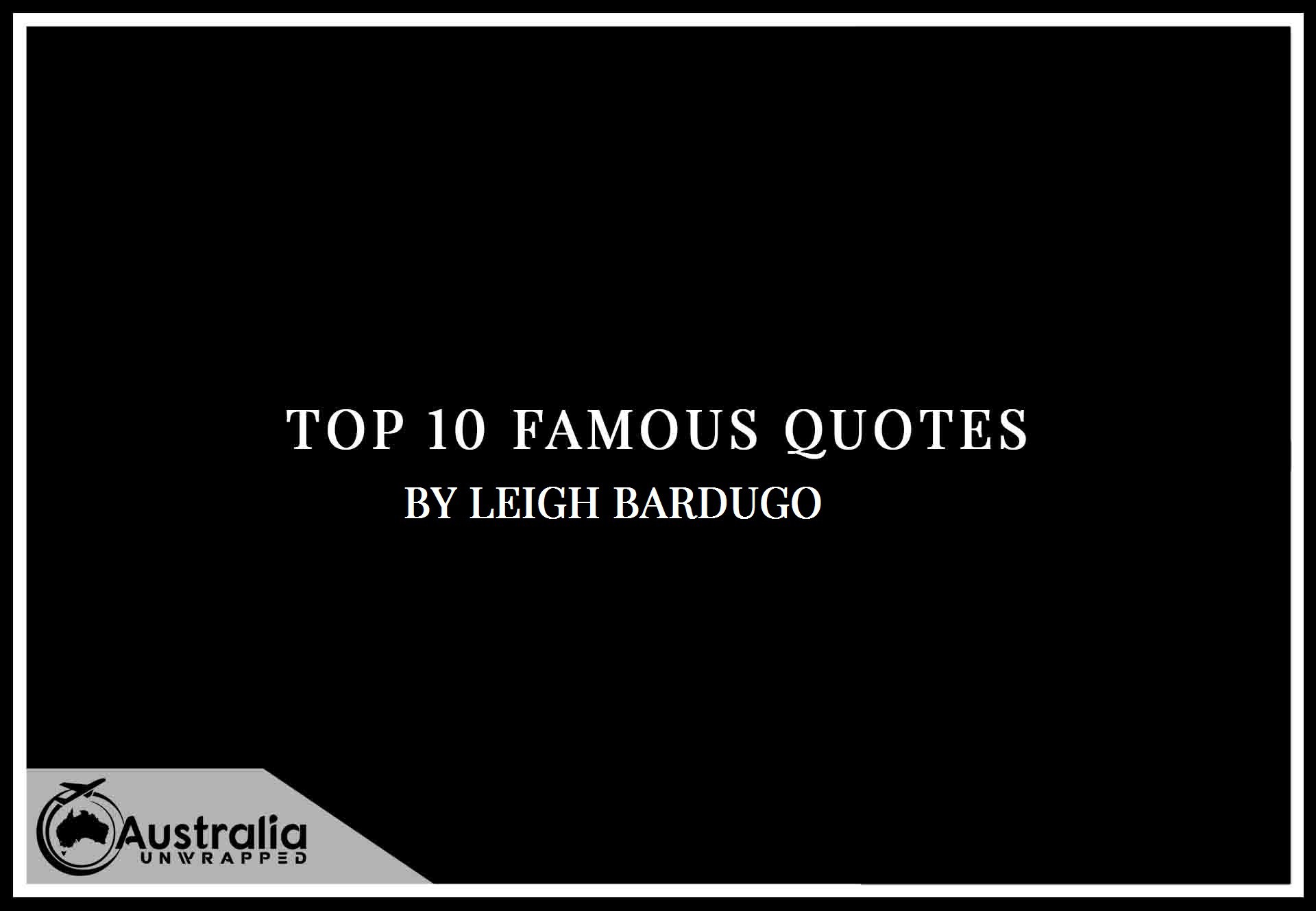 Leigh Bardugo, a writer whom I am guessing you love? Here are our 10 best Leigh Bardugo quotes for you to enjoy. At Australia Unwrapped we believe every book has at least one quotable line, and our mission is to find them all. Here you will find Leigh Bardugo’s top 10 popular and famous quotes. Like every good writer Leigh Bardugo made a number of memorable quotes, here are some of our favorites:

Leigh Bardugo is a #1 New York Times bestselling author of fantasy novels and the creator of the Grishaverse (now a Netflix original series) which includes the Shadow and Bone Trilogy, the Six of Crows Duology, the King of Scars Duology, and The Language of Thorns-with more to come. Her short stories have appeared in numerous anthologies, including the Best American Science Fiction & Fantasy. Her other works include Wonder Woman: Warbringer and Ninth House, which is being developed for television by Amazon Studios. She lives in Los Angeles. Get updates on new releases and appearances by subscribing to her newsletter.

More from the Author: https://amzn.to/3bPNd1D

“The heart is an arrow. It demands aim to land true.”
― Leigh Bardugo, Six of Crows

“Jesper knocked his head against the hull and cast his eyes heavenward. “Fine. But if Pekka Rollins kills us all, I’m going to get Wylan’s ghost to teach my ghost how to play the flute just so that I can annoy the hell out of your ghost.”
Brekker’s lips quirked. “I’ll just hire Matthias’ ghost to kick your ghost’s ass.”
“My ghost won’t associate with your ghost,” Matthias said primly, and then wondered if the sea air was rotting his brain.”
― Leigh Bardugo, Six of Crows

“Many boys will bring you flowers. But someday you’ll meet a boy who will learn your favorite flower, your favorite song, your favorite sweet. And even if he is too poor to give you any of them, it won’t matter because he will have taken the time to know you as no one else does. Only that boy earns your heart.”
― Leigh Bardugo, Six of Crows

“I would have come for you. And if I couldn’t walk, I’d crawl to you, and no matter how broken we were, we’d fight our way out together-knives drawn, pistols blazing. Because that’s what we do. We never stop fighting.”
― Leigh Bardugo, Crooked Kingdom

“Kaz leaned back. “What’s the easiest way to steal a man’s wallet?”
“Knife to the throat?” asked Inej.
“Gun to the back?” said Jesper.
“Poison in his cup?” suggested Nina.
“You’re all horrible,” said Matthias.”
― Leigh Bardugo, Six of Crows

“She’d laughed, and if he could have bottled the sound and gotten drunk on it every night, he would have. It terrified him.”
― Leigh Bardugo, Six of Crows

“When everyone knows you’re a monster, you needn’t waste time doing every monstrous thing.”
― Leigh Bardugo, Six of Crows

“I will have you without armor, Kaz Brekker. Or I will not have you at all.”
― Leigh Bardugo, Six of Crows

“No mourners. No funerals. Among them, it passed for ‘good luck.”
― Leigh Bardugo, Six of Crows

Quotes for all, here you found our selection of 10 Leigh Bardugo quotes. Make sure you help by commenting your best Leigh Bardugo quote below and sharing our favorite authors so we can look them up, read some of their works and give you the best quotes we can find. We hope you enjoyed our top 10 quotes by Leigh Bardugo. However, feel free to comment below if you disagree or would like to include some other great and memorable Leigh Bardugo quotes in our list.

“I missed you every hour. And you know what the worst part was? It caught me completely by surprise. I’d catch myself just walking around to find you, not for any reason, just out of habit, because I’d seen something that I wanted to tell you about or because I wanted to hear your voice. And then I’d realize that you weren’t there anymore, and every time, every single time, it was like having the wind knocked out of me. I’ve risked my life for you. I’ve walked half the length of Ravka for you, and I’d do it again and again and again just to be with you, just to starve with you and freeze with you and hear you complain about hard cheese every day. So don’t tell me why we don’t belong together,” he said fiercely.”
― Leigh Bardugo, Shadow and Bone

More from the Author: https://amzn.to/3bPNd1D