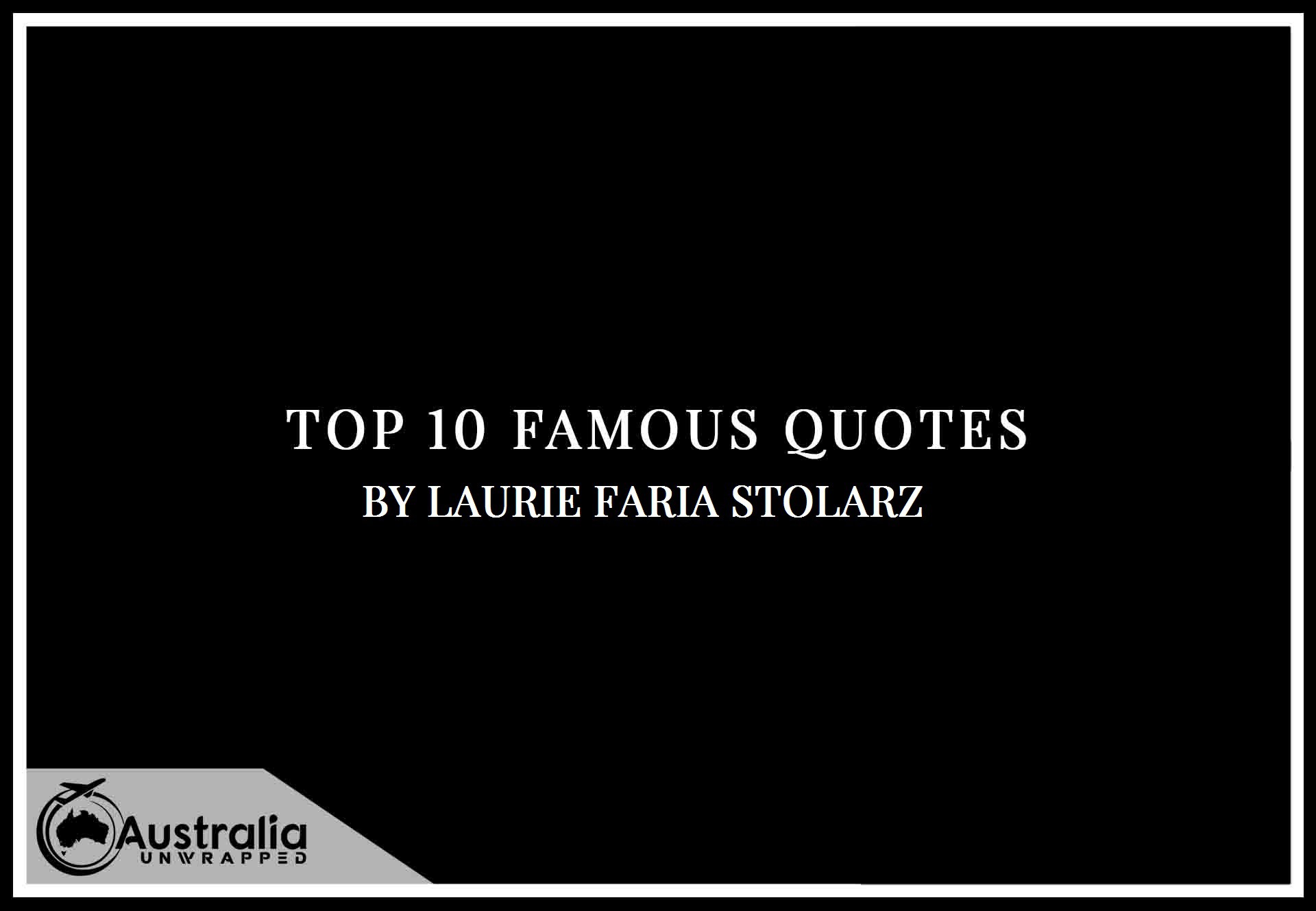 Laurie Faria Stolarz is an American author of YA fiction fiction, whose most popular series is Blue is for Nightmares. In her works, teenage protagonists combine elements of mystery and romance.

After finding success with her first novel, Blue is for Nightmares, Stolarz went on to write White is for Magic, Silver is for Secrets, and Red is for Remembrance, along with a companion graphic novel, Black is for Beginnings. He is also the author of the Touch series (Deadly Little Secret, Deadly Little Lies, Deadly Little Games, Deadly Little Voices, and Deadly Little Lessons), as well as Bleed and Project 17. More than two million books have been sold worldwide, and Stolarz’s titles have won a number of awards.

More from the Author: https://amzn.to/3bNzNDk

“We sit there, our eyes locked on one another, for several seconds. I know in my heart we’re both thinking the same thing. Jacob leans forward over the candle, the shadow of the flame dancing against his bottom lip. I lean forward to meet him as well. It’s a kiss full of promise, of trust, and of all that is magic.”
― Laurie Faria Stolarz, White Is for Magic

“Okay, now you’re starting to scare me,” Wes says.
“No, scary is the way people can alter their voices on cue. Like your imitation of that creepy guy who lives at your house.”
“You mean my dad?” he laughs.”
― Laurie Faria Stolarz, Deadly Little Lies

“If it were up to me, all boys would come with a label: Failure to take in small doses may result in irrational behavior, poor judgment, and estrangement from one’s friends.”
― Laurie Faria Stolarz, Deadly Little Secret

“People are so stupid. They think they’ve got the whole puzzle figured out, but they’re really so far off.”
― Laurie Faria Stolarz, Deadly Little Games

“You need to screw up to learn. You need to experience to create greatness.”
― Laurie Faria Stolarz, Deadly Little Secret

“Aww, you know my verbal stingers are only poisoned with love”
― Laurie Faria Stolarz, Silver Is for Secrets

“Dear Jack:
I have no idea who he was. But he saved me. From you.
I watched from the doorway as he smacked, punched, and threw you against the wall. You fought back hard- I’ll give you that- but you were no match for him.
And when it was over- when you’d finally passed out- the boy made direct eye contact with me. He removed the rag from my mouth and asked me if I was okay.
Yes. I mean, I think so,’ I told him.
But it was her that he was really interested in: the girl who was lying unconscious on the floor. Her eyes were swollen, and there looked to be a trail of blood running from her nose.
The boy wiped her face with a rag. And then he kissed her, and held her, and ran his hand over her cheek, finally grabbing his cell to dial 911.
He was wearing gloves, which I thought was weird. Maybe he was concerned about his fingerprints, from breaking in. But once he hung up, he removed the gloves, took the girl’s hand, and placed it on the front of his leg- as if it were some magical hot spot that would make her better somehow. Tears welled up in his eyes as he apologized for not getting there sooner.
I’m so sorry,’ he just kept saying.
And suddenly I felt sorry too.
Apparently it was the anniversary of something tragic that’d happened. I couldn’t really hear him clearly, but I was pretty sure he’d mentioned visiting an old girlfriend’s grave.
You deserve someone better,’ he told her. ‘Someone who’ll be open and honest; who won’t be afraid to share everything with you.’ He draped his sweatshirt over her, kissed her behind the ear, and then promised to love her forever.
A couple minutes later, another boy came in, all out of breath. ‘Is she alright?’ he asked.
The boy who saved me stood up, wiped his tearful eyes, and told the other guy to sit with her until she woke up. And then he went to find scissors for me. He cut me free and brought me out to the sofa. ‘My name’s Ben,’ he said. ‘And help is on the way.’
When the girl finally did wake up, Ben allowed the other guy to take credit for saving her life. I wanted to ask him why, but I haven’t been able to speak.
That’s what this letter is for. My therapist says that I need to tell my side of things in order to regain my voice. She suggested that addressing my thoughts directly to you might help provide some closure.
So far, it hasn’t done the trick.
Never your Jill,
Rachael”
― Laurie Faria Stolarz, Deadly Little Voices

More from the Author: https://amzn.to/3bNzNDk