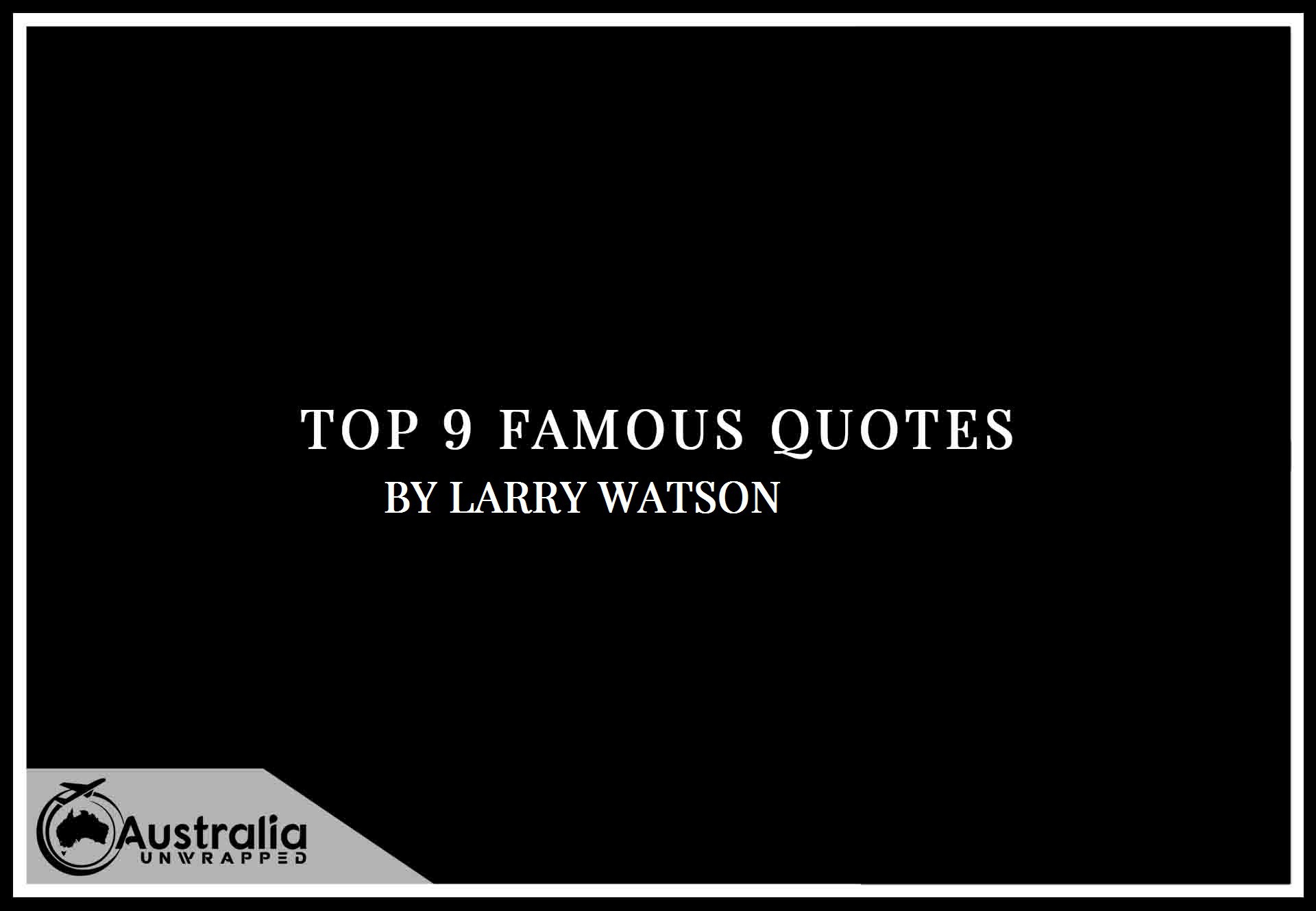 Larry Watson, a writer whom I am guessing you love? Here are our 9 best Larry Watson quotes for you to enjoy. At Australia Unwrapped we believe every book has at least one quotable line, and our mission is to find them all. Here you will find Larry Watson’s top 9 popular and famous quotes. Like every good writer Larry Watson made a number of memorable quotes, here are some of our favorites:

Larry Watson was born in Rugby, North Dakota, in 1947. He grew up in Bismarck, North Dakota, and attended public schools there. In 1967, Larry married his high school sweetheart, Susan Gibbons. He earned his BA and MA at the University of North Dakota, his Ph.D. at the University of Utah, and an honorary Doctor of Letters degree from Ripon College. He has received grants and fellowships from the Wisconsin Arts Board and the National Endowment for the Arts (1987, 2004).

More from the Author: https://amzn.to/3J6VMC0

“Out of town I could simply be, I could feel my self, firm and calm and unmalleable as I could not when I was in school or in any of the usual human communities that seemed to weaken or scatter me. I could sit for an hour in the rocks above the Knife River, asking for no more discourse than that water’s monotonous gabble. I was an inward child, it was true, but beyond that, I felt a contentment outside human society that I couldn’t feel within it.”
― Larry Watson, Montana 1948

“From the bluffs east of the city, Gladstone, Montana looks as though it could have been laid out by a shotgun blast, the commercial and residential districts a tight cluster in the center and then the buckshot dispersing in the looser pattern of outlying houses and businesses owned by those Montanans for whom space is a stronger article of faith than neighborliness.”
― Larry Watson, Let Him Go

“A four-year-old has so little past, and he remembers almost none of it, neither the father he once had nor the house where he once lived. But he can feel the absences – and feel them as sensation, like a texture that was once at his fingers every day but now is gone and no matter how he gropes or reaches his hand he cannot touch what’s no longer there.”
― Larry Watson, Let Him Go

“Now no sign, no scorch or char, marks the place where George built the fire. Remarkable, earth’s strength to restore itself and erase human effort. But memory, stronger still, can send flames as high as the roof, and shift the wind and choke George and sting his eyes with smoke…”
― Larry Watson, Let Him Go

“Autumn has come to northeast Montana. The vapor of one’s breath, the clarity of the stars, the smell of wood smoke, the stones underfoot that even a full day of sunlight won’t warm- these all say there will be no more days that can be mistaken for summer.”
― Larry Watson, Let Him Go

“Long past the moment when her neck begins to stiffen and ache, she continues to stare into the darkness, even though none of the human secrets she needs to know are to be found in the stars but rather closer to the earth her boots stand upon.”
― Larry Watson, Let Him Go

“The limitless, lowering sky, the long stretches of motionless empty prairie, the silence, complete right down to the absence of birdsong — who knows what decides a man to leave most of his words unspoken?”
― larry watson, Let Him Go

“With so much unknown in this life, how little it takes for a face, a grove of trees, an outcropping of stone to become familiar.”
― Larry Watson, Let Him Go

“When night comes on in a room lit by kerosene, any flicker of the flame can give the sense that darkness is about to triumph.”
― Larry Watson, Let Him Go

Quotes for all, here you found our selection of 9 Larry Watson quotes. Make sure you help by commenting your best Larry Watson quote below and sharing our favorite authors so we can look them up, read some of their works and give you the best quotes we can find. We hope you enjoyed our top 9 quotes by Larry Watson. However, feel free to comment below if you disagree or would like to include some other great and memorable Larry Watson quotes in our list.

More from the Author: https://amzn.to/3J6VMC0