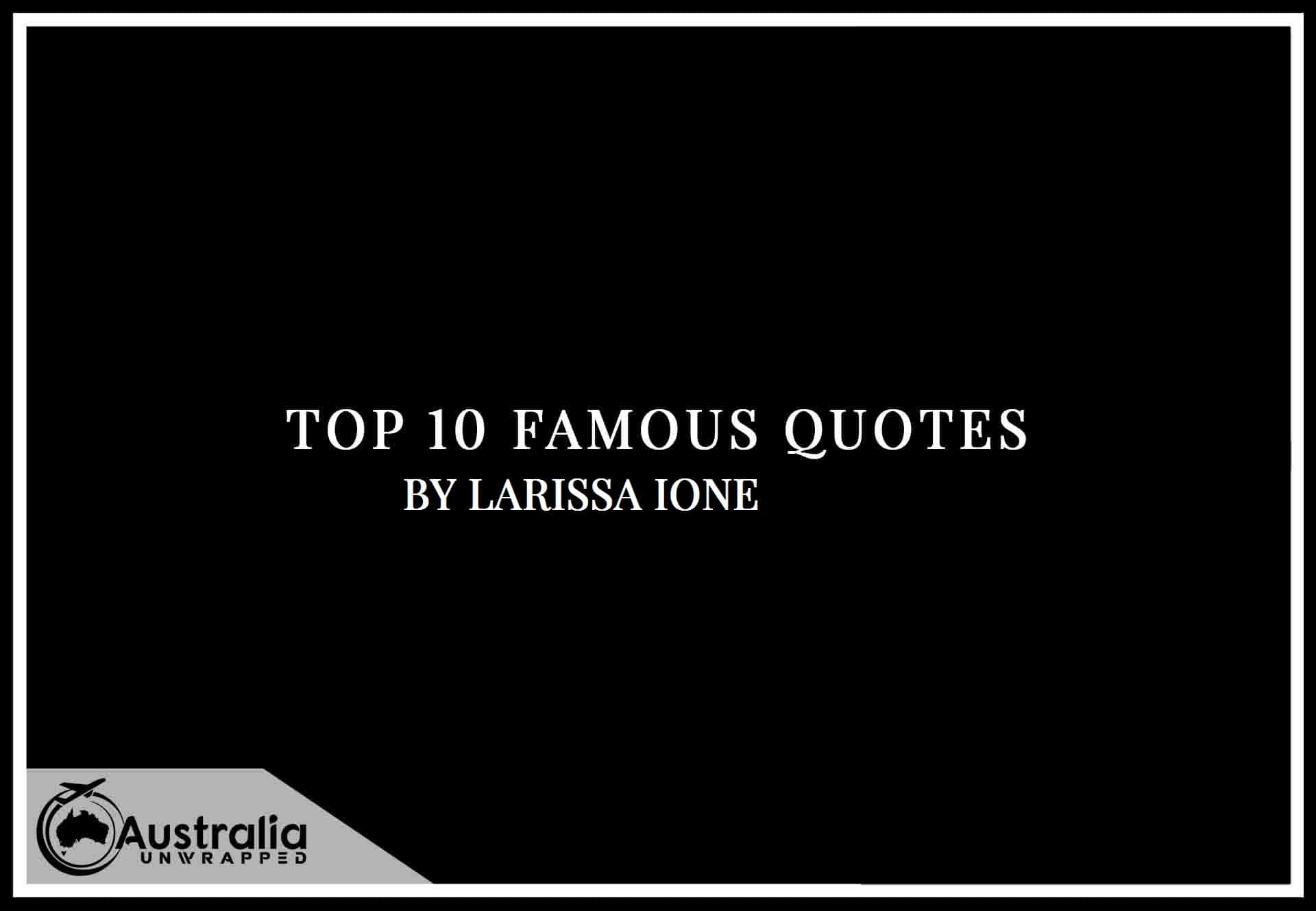 Larissa Ione, a writer whom I am guessing you love? Here are our 10 best Larissa Ione quotes for you to enjoy. At Australia Unwrapped we believe every book has at least one quotable line, and our mission is to find them all. Here you will find Larissa Ione’s top 10 popular and famous quotes. Like every good writer Larissa Ione made a number of memorable quotes, here are some of our favorites:

Larissa Ione traded in the meteorology career she loved to pursue her passion for writing. Since then, she has published dozens of books, been on several bestseller lists, including those of the New York Times and USA Today, and has been nominated for a RITA award. As of now, she lives in pajamas and enjoys strong coffee, a computer, and supernatural worlds. She celebrates everything and keeps a bottle of Champagne chilled in the fridge just in case. She currently lives in Wisconsin with her retired U.S. Coast Guard husband, her son, and two hellhounds, a King Shepherd named Hexe and a Belgian Malinois named Duvel.

“I’ll bet you could make a woman throw out all her toys”
― Larissa Ione, Pleasure Unbound

“Tayla cursed under her breath. “I was just explaining to Eidolon that Sin is a Smurfette.”
Wraith swung his big body around to study Sin with blue eyes that were very different from Shade’s, E’s. and Lore’s. Sin’s, too. “Nah. Smurfette is way hotter.”
“What the fuck is a Smurfette?” Eidolon was seriously getting annoyed now.
“There’s this cartoon called The Smurfs,” Tayla explained, slowly, as though Eidolon were the child here.
“They’re these little blue people, and they’re all male. But one day a female shows up. She shouldn’t exist, but she does.”
Eidolon considered that for a second. “How did she get there?”
“An evil wizard named Gargamel made her,” Tayla said. “In a lab or something.”
“So you’re suggesting that an evil wizard made Sin?”
“Of course not, silly. I’m just saying she’s a Smurfette. A lone female amongst males.”
Eidolon frowned. “Did the Smurfette mate with the males?”
“Dude.” Wraith grimaced. “It’s a cartoon.”
― Larissa Ione, Ecstasy Unveiled

“The entire hospital seemed to go still, watching and waiting, and what the hell was up with Sin and guys on horses anyway? “Well, who is he?”

Con stared at her. “War. Just…War. What kind of name is that?” Nope, not jealous at all of muscle-bound handsome guy.

“Yeah, you know, the original War. Second Horseman of the Apocalypse?”

Con nearly swallowed his fucking tongue. Everyone else in the ER scrambled backward. Even Eidolon backed up a step as the guy swung down from the horse. Christ, standing, the guy was damned near seven feet tall.

“Sin,” he said in an impossibly deep voice. He approached her, bent to kiss her cheek, and Con bristled.

“Wow.” Sin said, her high-heeled boots clacking on the floor as she approached. ” I didn’t expect a party or anything, but I figured you might be able to handle a hi.”
“I’m serious” , he gritted. “Get out.”
“Well, you know what ?” She tied her hair up in a knot. “I would, except that you fucking bonded me to you or something, and I need to borrow your dick for a minute.”
― Larissa Ione, Sin Undone

“So,uh, where am I, exactly ? And what do you plan on doing with me ?”
“You’re at Underworld General Hospital. As you can probably guess, we specialize in nonhuman medical care. Our location is secret, so don’t ask.”
“UGH ? Your hospital is called ‘ugh’ ? Oh, that’s precious.”
― Larissa Ione, Pleasure Unbound

“Congratulations on the new spawn, by the way.”
“Well,” Gem said, “that was better than what Wraith said.” She lowered her voice and did an imitation of Wraith. “Way cool about the fuck-trophy.”
― Larissa Ione, Ecstasy Unveiled

“…and horror of horrors, he realized that he was experiencing some sort of a crush.

He needed to kill something.”
― Larissa Ione, Eternal Rider

“I’ve got a mind to turn you over my knee and spank the spoiled hell out of you”
― Larissa Ione, Sin Undone

“You can’t truly hate someone you’ve loved. You can only hurt.”
― Larissa Ione, Desire Unchained

Quotes for all, here you found our selection of 10 Larissa Ione quotes. Make sure you help by commenting your best Larissa Ione quote below and sharing our favorite authors so we can look them up, read some of their works and give you the best quotes we can find. We hope you enjoyed our top 10 quotes by Larissa Ione. However, feel free to comment below if you disagree or would like to include some other great and memorable Larissa Ione quotes in our list.

“Yeah,” he grount out. “I nailed her.”
“Where?” Luc always wanted the dirty details.
“Stockroom. Pay up.”
Luc snorted and reached for his wallet. “I really got taken on this one , didn’t I?” He handed over four hundreds and five twenties.
“Yeah, well, you can have the last laugh once the Sem brothers catch up with me. Seems she’s their sister.”
“Dude.” Luc streched out the word and then whistled, low and long. “Nice knowing you. So, will it at least have been worth it? Being gutted by Shade, I mean. Was she good ?”
His body heated as though remembering. And wanting again.
“Of course I was.”
Fuck. Con spun around to find Sin standing there, hands on hips and fury in her expression. Like a kid caught stealing candy, he whipped the money behind his back. She looked at him as if he was an idiot and grabbed his arm, briging it around.
“It’s not what you think,” he said lamely, because it was exactly what she thought.
“Really? So that big asshole behind you didn’t bet you five hundred bucks that you couldn’t fuck me ?”
“Ah…”
“That’s what I thought. You dick. How stupid do you think I am ? Your name really fits you , Con.” She snatched the money from him, took two hundreds and three twenties, and thrust the remaining two hundred and forty dollars back into his hand. Then, smiling broadly, she punched him in the shoulder. “Next time you make a bet like that, don’t cheat me out of my half. I owe you a ten.”
She winked and left him, jaw-dropped and gaping, as she sauntered away.”
― Larissa Ione, Ecstasy Unveiled