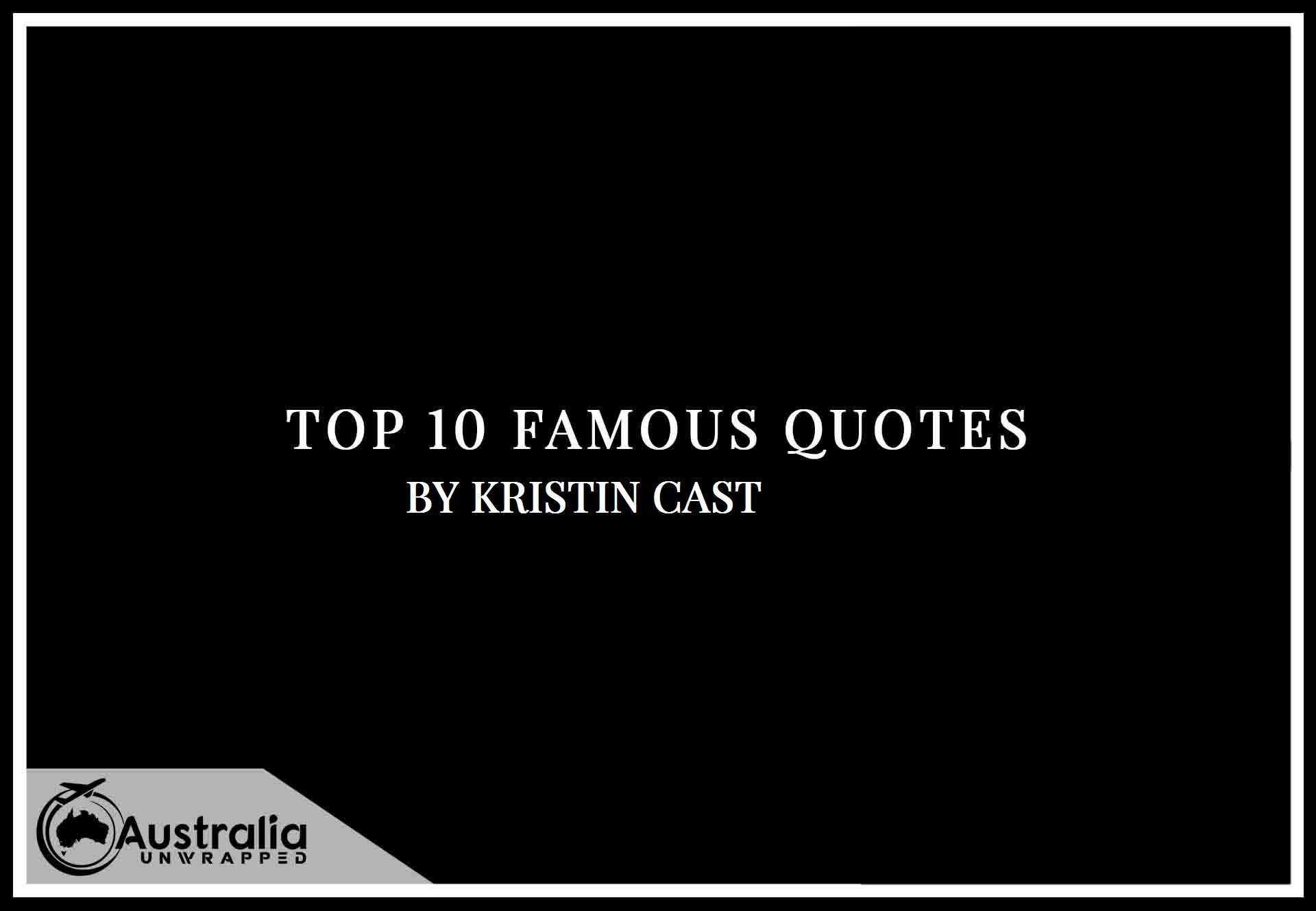 Kristin Cast, a writer whom I am guessing you love? Here are our 10 best Kristin Cast quotes for you to enjoy. At Australia Unwrapped we believe every book has at least one quotable line, and our mission is to find them all. Here you will find Kristin Cast’s top 10 popular and famous quotes. Like every good writer Kristin Cast made a number of memorable quotes, here are some of our favorites:

Kristin Suri is a #1 New York Times and #1 USA Today bestselling author who was born on an Air Force base in Japan and raised in Oklahoma where she explored everything from tattoo modeling to broadcast journalism. After battling addiction, Kristin landed in Portland, Oregon. Her passion for storytelling was rediscovered in dusty bookstore stacks and rickety chairs at old coffeehouses. As long as Kristin can remember, she has been telling stories. Thankfully, she’s been keeping track of them since 2005.

More from the Author: https://amzn.to/3BjBKSL

“The problem, of course, was that turning into a monster was the brighter of my two choices. Choice Number 1: I turn into a vampyre, which equals a monster in just about any human’s mind. Choice Number 2: My body rejects the Change and I die. Forever.

So the good news is that I wouldn’t have to take the geometry test tomorrow.”
― Kristin Cast, Marked

“I don’t want any of this. I just want to be what I was before you showed up here and all hell broke loose. I want to be popular and dating the hottest guy in school. Now I’m none of those things, and I’m a human who has scary visions and don’t know what to do about any of it.”
― Kristin Cast, Untamed

“When I did finally speak, I surprised myself by saying exactly what was on my mind. “You must hate me.”
She stared a long time at me.
I did,” she said slowly, “But it’s mostly myself I hate.”
Don’t,” I said.
And why the hell shouldn’t I hate myself? Everybody else hates me.”
― Kristin Cast, Untamed

“Hey, which one of them is supposed to be your boyfriend?” Stark
asked me. Even in the terrible shape he was in, he caught my glance
with his. His voice was scratchy, and he sounded scarily weak, but
his eyes sparkled with humor.

I am!” Heath and Erik said together.”
― Kristin Cast, Tempted

“That man is such a damn turd monkey.”
“Grandma!” I said.
“Oh, Zoeybird, did I call your mother’s husband a damn turd monkey out loud?”
“Yes, Grandma, you did.”
She looked at me, her dark eyes sparkling. “Good.”
― Kristin Cast, Chosen

“We’re so special, when you look in the dictionary under short bus, there’s a group picture of us,” Stevie Rae said, sounding weak but definately alive.”
― Kristin Cast, Untamed

“I’ll even let Heath help out,” he really
sounded like a pompous butt.

You’ll let me help out?” Heath snapped. “Your mom will let me
help out.”
― Kristin Cast, Tempted

“We all have bad things inside us, and we all choose either to give in to those bad things or to fight them.”
― Kristin Cast, Untamed

“If I died, would it get me out of my geometry test tomorrow? One could only hope.”
― Kristin Cast, Marked

Quotes for all, here you found our selection of 10 Kristin Cast quotes. Make sure you help by commenting your best Kristin Cast quote below and sharing our favorite authors so we can look them up, read some of their works and give you the best quotes we can find. We hope you enjoyed our top 10 quotes by Kristin Cast. However, feel free to comment below if you disagree or would like to include some other great and memorable Kristin Cast quotes in our list.

“Really? Well, you’d definitely be interested in the fact that I just read To Kill A Mockingbird.”
I smiled and elbowed him. “Everyone’s read that.”
I’ve read it five times.”
Nu-uh.”
Yep. I can even quote parts of it.”
That’s bullpoopie.”
And then Stark, my big, bad, macho Warrior raised his voice, put on a little girl’s Southern drawl, and said, “‘Uncle Jack? What’s a whore-lady?'”
I do not think that’s the most important quote from that book,” I said, but laughed anyway.
Okay, how about: ‘Ain’t no snot-nosed slut of a schoolteacher ever born c’n make me do nothin.!’ That one’s really my favorite.”
You got a twisted mind, James Stark.”
― Kristin Cast, Tempted

More from the Author: https://amzn.to/3BjBKSL