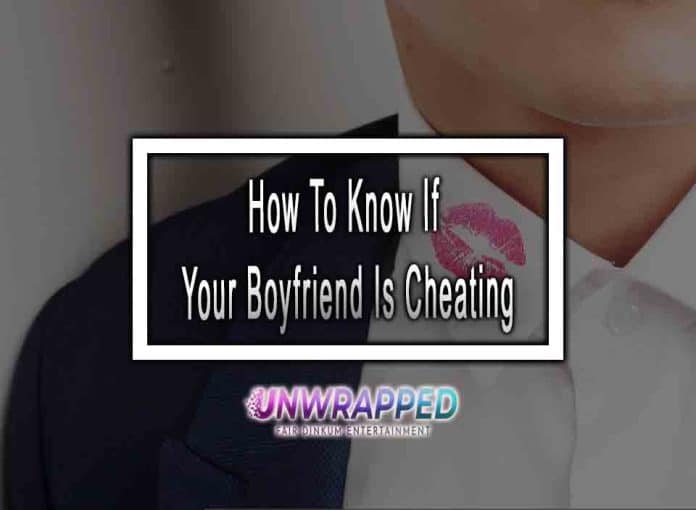 Things To Know If Your Boyfriend Is Cheating

It’s a fact of life. Not all relationships end in sunshine and roses. Things often fall apart in the worst possible way. There are dozens of reasons why this happens. One of the biggest is when one party decides to play away from home i.e. CHEAT. But if your boyfriend is doing this, then how would you even know? To help you out, here are a few things to look for.

This is often the first and most definite sign. You get a feeling that things are off. Your boyfriend is acting weird and you know that something’s wrong. Just a word of warning though. It doesn’t pay to jump to conclusions. Before you go accusing him, make sure that he is actually cheating.

Technology makes affairs easier than ever. Is your boyfriend acting suspicious with technology? Does he have a second phone? Does he slam his laptop shut when you walk in the room? Does he walk out the room when taking phone calls? These are all signs of cheating. Another huge sign is if he acts defensive when you bring up this issue.

We’re often blinded by love. This may also blind us to the fact that something is wrong. That’s why friends and family often notice the signs of cheating long before we do. If your loved ones are asking questions, then it’s probably a good idea to listen to them.

Most people have a daily routine and this rarely changes. Therefore, a change in his routine could means he’s making time for someone else. For example, is he leaving earlier for work than usual, or getting back later?

He may be overcompensating by paying more attention to you. This could include things like buying you gifts unexpectedly. Maybe he’s spending more time with the kids than usual, or helping out around the house. This goes hand in hand with changing his routine. Basically, strange behavior is always a sign that something’s wrong.

Does he get irritated when you ask if anything is wrong? Does he act defensive or evasive, or do things which arouse your suspicion? This usually happens because he’s worried that you’ll catch him.

Does your boyfriend seem as if he’s “changed.” Does he have a new enthusiasm for life? This could include many things. For example, maybe he’s buying new clothes, working out more, or taking better care of himself.

If your boyfriend showers immediately after getting home, it could be because he’s trying to wash off the stink of you-know-what. It’s either that, or it seems as if he’s just showered. Whatever the case, this is deeply suspicious.

Also see: Man Finds Out His Wife’s Been Cheating for 10 years