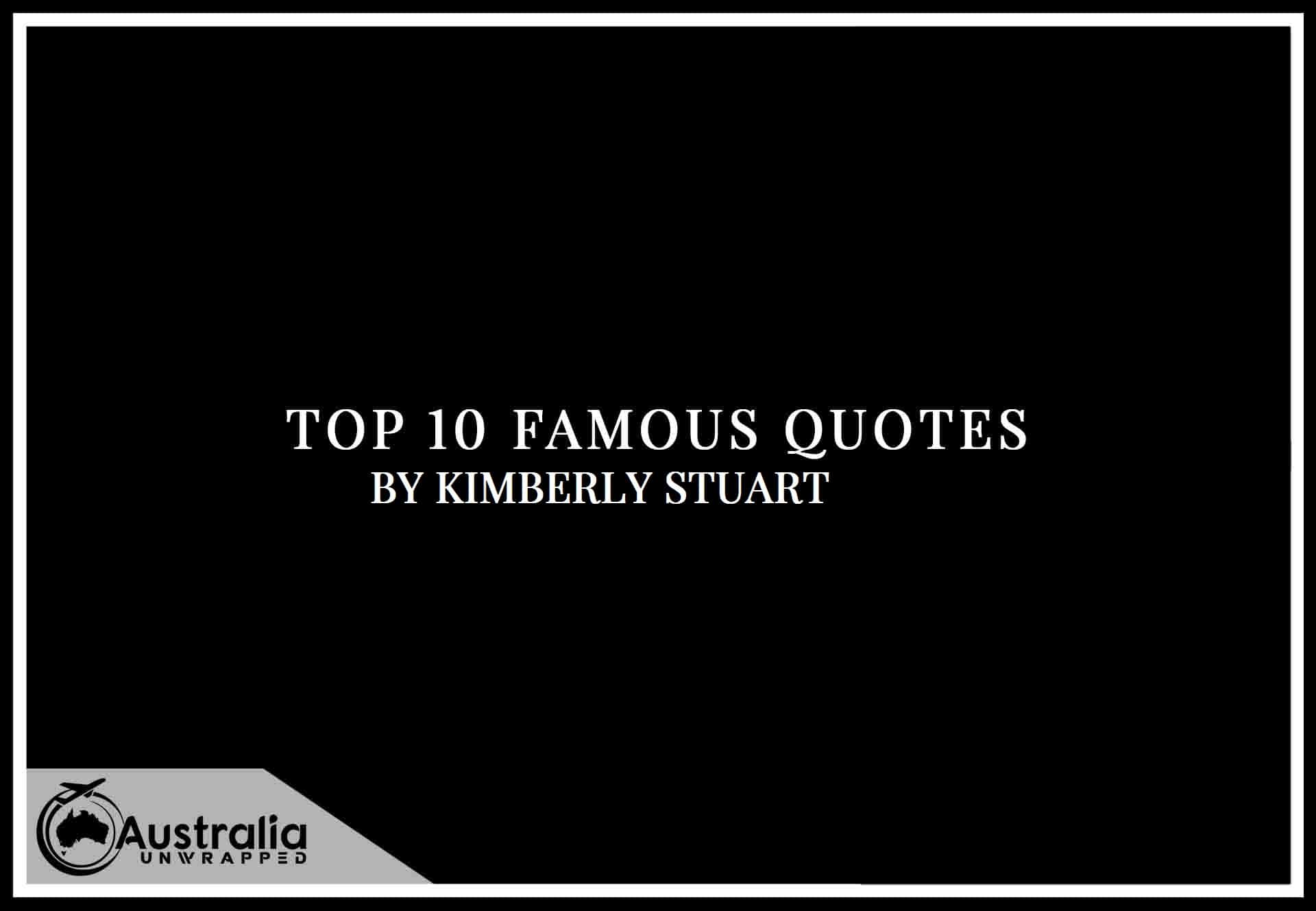 Kimberly Stuart, a writer whom I am guessing you love? Here are our 10 best Kimberly Stuart quotes for you to enjoy. At Australia Unwrapped we believe every book has at least one quotable line, and our mission is to find them all. Here you will find Kimberly Stuart’s top 10 popular and famous quotes. Like every good writer Kimberly Stuart made a number of memorable quotes, here are some of our favorites:

Kimberly Stuart has always been drawn to good stories, good writing, and good laughs. She also enjoys Dutch cheeses and dark chocolate. As a child, she forced her brother to play the ever-riveting game of “Library.” She wrote official-looking information with a red Sharpie, while Ryan held the inscribed, stinky book. Ryan soon realized that there were other neighborhood children who would not make him suffer like this.

More from the Author: https://amzn.to/3vHdruk

“But you are single and childless. And frivolous with time.”
― Kimberly Stuart, Sugar

“Truffles, foie gras, seafood, and caviar for forty-five people exceeded the restaurant’s resources in both finances and prep time. The food at family meal was intended to be simple but tasty. We cooks took turns organizing and cooking for the restaurant staff before the first seating of the evening. In the early years, hand-stretched pizza had made regular appearances, as did roasted chicken, spaghetti and meatballs, and vats of chicken noodle soup. Recently, though, some newer recruits in the kitchen had turned family meal into more of a family feud. Eager to show Alain their individual style and prowess, the newbies had whipped up ten square feet of vegetarian lasagna with made-from-scratch ribbons of pasta, individual Beef Wellingtons with flaky pastry crusts, pillowy gnocchi dunked in decadent Bleu d’Auvergne with a finish of nutmeg grated tableside. Irritatingly good but, in my opinion, completely missing the point.”
― Kimberly Stuart, Sugar

“Buttermilk pancakes weren’t typically equipped to fill gaping holes in one’s heart, but the ones I ate that day at Howie’s came pretty darn close. My first bite of Wilma’s Cakes made my mouth water while eating. They were spongy and light but still had some gumption. The buttermilk seemed to be paired with something fantastic- sour cream? Crème fraîche? Not here, certainly… There were subtle notes of nutmeg and cinnamon, just the right touch without the pancake turning into a spice fest.
I moaned while I bit into a raspberry muffin.
“Exactly,” Manda said, her eyes closed around the joy of a pecan roll. “Better than you-know-what.”
“Watch it, now,” Jack said, but without heart. His bacon, asparagus, and goat cheese omelet was nearly gone, but he ate with one protective arm curled around his plate in defense anyway.”
― Kimberly Stuart, Sugar

“I brandished an updated printout of my spreadsheet and pointed to the column I had labeled SUMMER: FILLED DESSERT/BERRIES/INDIGENOUS PRODUCE. “A Lintzer torte would present nicely, and the nutty crumb of the pastry would be a perfect pairing with Washington strawberry preserves, but lemon crêpes with a blackberry sauce seems to just scream ‘summer’, don’t you think?”
― Kimberly Stuart, Sugar

“The symmetry was perfect, each triangle a perfect replica of its neighbor. Cashews, hazelnuts, and blanched almonds peeked out of their baptism in caramel jam, a sea of creamy browns punctuated by green pistachios. The tart shell formed a precise circle of pastry around the caramel and nuts.”
― Kimberly Stuart, Sugar

“…this place, this life, the one we were building together, even with all its cracks and bumps and imperfections, this life was the one I needed, the one I wanted, and that best of all, it was home.”
― Kimberly Stuart, Better Together

I paint first to honor God who paints the sunsets and oceans and human hearts. And second, I paint so I don’t get cranky like so many of the old people in this world.”
― Kimberly Stuart, Operation Bonnet

“I felt my heart warm up and become pliable in a way that I hadn’t felt in far too long, and I knew in that moment that the thaw had happened because I was finally surrendering.”
― Kimberly Stuart, Better Together

“God feels like He’s taken a road trip lately and I’m not sure I want to track Him down.”
― Kimberly Stuart, Better Together

“For being so early in the season, the tables on either side of the street were heavily laden with produce. I could see English peas, asparagus, arugula, several varieties of chard, kale, rhubarb, radishes… My mouth tingled as I walked slowly from booth to booth, drinking in the knowledge that the food I was checking out had not been trucked over the Jersey Turnpike or from a far-flung spot upstate, but from somewhere nearby, where people still felt dirt in their hands and not just in their nostrils after a day of walking in the city.
I paused at the end of a block, and my gaze zeroed in on a mountain of gorgeous strawberries a few stands down. Cutting in and out of the throng, I reached the stand and stood under a banner that read FORSYTHIA FARMS. I crouched to be eye level with the berries, narrowing my eyes at their color, shape, and size. The red was deep, but still bright. Shape: irregular, as they should be, and still shooting delightful stems that poked out the tops like tiny berets. The berries weren’t too small, and best of all, not too large. No Costco mutants, I was pleased to note.”
― Kimberly Stuart, Sugar

More from the Author: https://amzn.to/3vHdruk