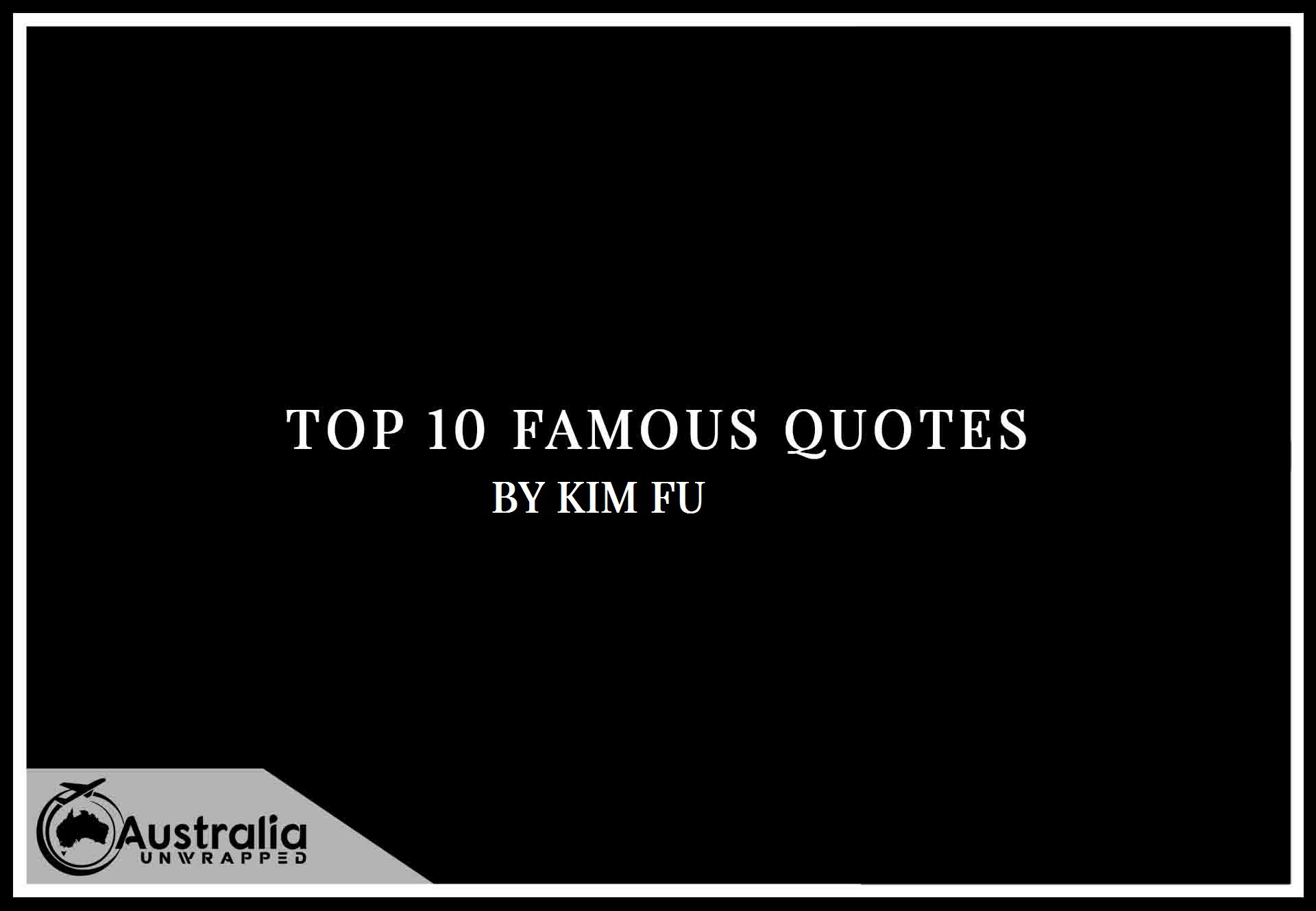 Kim Fu, a writer whom I am guessing you love? Here are our 10 best Kim Fu quotes for you to enjoy. At Australia Unwrapped we believe every book has at least one quotable line, and our mission is to find them all. Here you will find Kim Fu’s top 10 popular and famous quotes. Like every good writer Kim Fu made a number of memorable quotes, here are some of our favorites:

Kim Fu is a Canadian-born writer who lives in Seattle, Washington. .

She was a finalist for the PEN/Hemingway Award and won the Edmund White Award for Debut Fiction for FOR TODAY I AM A BOY. As well as being a New York Times Book Review Editors’ Choice, it was named to the long-list for CBC’s Canada Reads program. A starred review from Publisher’s Weekly accompanied Fu’s debut poetry collection HOW FESTIVE THE AMBULANCE, which won the National Magazine Awards Silver Medal and the Best Canadian Poetry nomination for 2016. In February 2018, she published THE LOST GIRLS OF CAMP FOREVERMORE.

His work has appeared in Granta, the Atlantic, the New York Times, Hazlitt, and the Times Literary Supplement. Among other fellowships, she has been awarded fellowships from the Ucross Foundation, Berton House, Wildacres, and Wallace Stegner.

More from the Author: https://amzn.to/3oZp4sY

“The older you get, the more every trauma is the same trauma.”
― Kim Fu, For Today I Am a Boy

“Even on that first, clear afternoon, the dark earth between the gravel paths and the deep green of towering pine, fir, and spruce trees contained the memory of recent snow and rain. The ocean at the far end of the camp was the color of slate.

Everything Siobhan was wearing was brand new: a black fleece she’d chosen for its silver heart-shaped zipper pull, her first pair of hiking boots, even her underwear. She felt a thrilling, terrifying dissolution of self. She was far from her parents, her classmates, anyone who had ever known here. She was curious to find out who she would be.”
― Kim Fu, The Lost Girls of Camp Forevermore

“The adults looked transfixed by Andee. When Andee finally swam a little closer, Siobhan could see why: the determined set of her mouth, the ferocity in her eyes. How much she wanted to finish. She would finish, no matter what. It would be cruel to stop her. And more to the point, if they ever were stranded in the ocean, Andee—who had been in the water for what felt like an eternity—would be the last to go down.”
― Kim Fu, The Lost Girls of Camp Forevermore

“She woke in the night drenched in sweat, pinned by Wolf’s heft, dog hair already past her mouth and compressing in her throat, a crushing, stultifying embrace. She envied other dog owners…The ones with friendly dogs, emanating love in all directions, like a hazy Corona of light. But sometimes she pitied them, that they would never know the focused, scorching beam of another creature’s obsession.”
― Kim Fu

“Siobhan wanted to be more like the heroines of the books she liked, about girl detectives and girl adventurers: tomboyish, scrappy, and resourceful, able to outsmart adults and survive without them, her body sun-brown and waiflike. She was, instead, a freckled, blue-eyed redhead, pale and dense as a block of shortening, who wasn’t allowed to use the stove.”
― Kim Fu, The Lost Girls of Camp Forevermore

“She turned and pressed her face into his back until his warmth and smell blotted out all thought, until she stopped wondering how long love could be enough, how long it could count as meaning, how long it could structure her days.”
― Kim Fu, The Lost Girls of Camp Forevermore

“The lesser entries: Gabe, every unrequited crush, passing infatuation, childhood kiss, anonymous pair of hands. Her life as a series of men. What an absurd way to mark the time.”
― Kim Fu, The Lost Girls of Camp Forevermore

“He noted the passage of time with such quiet wonder that Isabel felt it slipping away. She felt herself age, she felt the regrets she didn’t yet have.”
― Kim Fu, The Lost Girls of Camp Forevermore

“Kayla understood this as a fundamental difference between men and women: men could leave, women had to stay.”
― Kim Fu, The Lost Girls of Camp Forevermore

Quotes for all, here you found our selection of 10 Kim Fu quotes. Make sure you help by commenting your best Kim Fu quote below and sharing our favorite authors so we can look them up, read some of their works and give you the best quotes we can find. We hope you enjoyed our top 10 quotes by Kim Fu. However, feel free to comment below if you disagree or would like to include some other great and memorable Kim Fu quotes in our list.

“So,” John said, “I’ll meet you at your place at eight, and we can walk over together?” “What? For what?” “The vigil.” “I’m not going to that.” I tried to ignore his surprise, his dogged faith. “Of course you are.” “I don’t know this person.” John continued to stand there, arms hanging down. The knife skidded so much I lost my grip and had to pick it up again. “It could’ve been you,” he said finally. “No,” I said, chopping bluntly, breaking more than slicing the lettuce, “it couldn’t. I’ve worked my whole life so that it couldn’t be me.” White flash of a face. Where did they go, those boys, after they left us behind? “Last night,” John began. He paused, still looking wounded. “You were so happy.” I gathered the lettuce into a bin and held it against my stomach like a barrier. “If it had been me, it would’ve been your fault.” John reeled as though I’d struck him. “You’re a coward,” he said. “You’ve worked your whole life because you’re a coward.” “What do you know? What do you know about anything?” His family moved for him. The hormones. The surgery he was allowed to accept or reject. I waved my arm around the kitchen, at the stunned cooks watching us. “Nobody has to know about you! You can blend in whenever you want!” “You honestly believe that? You think my life’s been easy?” “Yes, I think it’s been fucking easy!” I screamed. “They don’t know! I didn’t know! I wish I still didn’t know!” I tried to shove past him. He touched my back. I remembered Humphrey Bogart’s hand, I remembered dancing, I remembered the gown twirling, I remembered the boy who complimented my ass, I remembered being told I was beautiful. I remembered the woman staring back at me in the Métro windows, her wink. I tried to pull away. John embraced me with my arms pinned to my sides, the lettuce bin between us, its raw, wet smell pushed toward our faces. In full view of the entire kitchen, he kissed me. A kiss that made me think of the woefully few people I had kissed in my life. A kiss that reminded me I had never been loved. A kiss that said I could not be John unless I risked being Dana. My”
― Kim Fu, For Today I Am a Boy

More from the Author: https://amzn.to/3oZp4sY