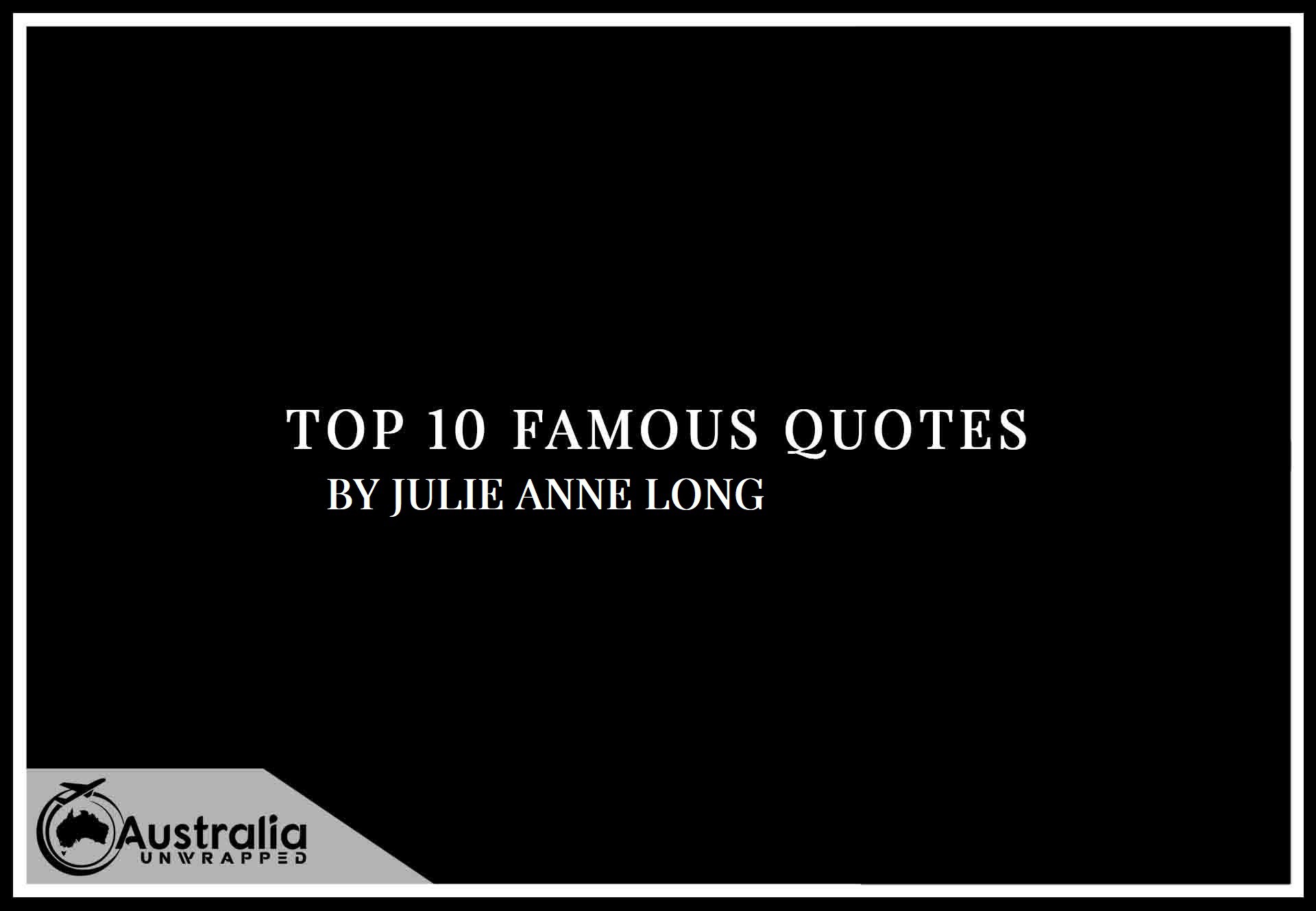 Quotes, who doesn’t love a good quote? This series of articles we look at Top 10 Famous Quotes by Author Julie Anne Long, author quotes are always a challenge and fun to pick, with Julie Anne Long you will find my Ten favorites of Julie Anne Long’s quotes.

A USA Today Bestselling author and Rita Award winner, Anne Long’s books have been translated into fourteen languages and nominated for numerous awards, including the Romance Writers of America Rita Award and Romantic Times Reviewer’s Choice Award, Reviews have praised them as “dazzling,” “brilliant,” and “impossible to put down.” HOT IN HELLCAT CANYON was named one of Amazon’s Best Books of 2016, and Kirkus Reviews named WILD AT WHISKEY CREEK one of the best books of 2016. She lives in California.

More from the Author: https://amzn.to/3yv2rCb

“You shouldn’t ask questions when you know at heart you’d prefer not to hear the answers.”
― Julie Anne Long, What I Did For a Duke

“What are your pleasures and pursuits, Lord Moncrieffe?” Miss Eversea asked too brightly, when the silence had gone on for more than was strictly comfortable or polite.
That creaky conversation lubricant. It irritated him again that she was humoring him.
“Well, I’m partial to whores.”
Her head whipped toward him like a weather-vane in a hurricane. Her eyes, he noted, were enormous, and such a dark blue they were nearly purple. Her mouth dropped, and the lower lip was quivering with shock or… or…
“Whor… whores…?” She choked out the word as if she’d just inhaled it like bad cigar smoke.
He widened his own eyes with alarm, recoiling slightly.
“I… I beg your pardon – Horses. Honestly, Miss Eversea,” he stammered. “I do wonder what you think of me if that’s what you heard.”
― Julie Anne Long, What I Did For a Duke

“A proper kiss, Miss Eversea, should turn you inside out. It should . . . touch places in you that you didn’t know existed, set them ablaze, until your entire being is hungry and wild…It should slice right down through you like a cutlass with a pleasure so devastating it’s very nearly pain … It should make you want to do things you’d never dreamed you’d want to do, and in that moment all of those things will make perfect sense. And it should herald, or at least promise, the most intense physical pleasure you’ve ever known, regardless of whether that promise is ever, ever fulfilled. It should, in fact . . . ” he paused for effect “ . . . haunt you for the rest of your life.”
― Julie Anne Long, What I Did For a Duke

“She thought that heartbreak might just give his character the shadows and corners and angles it needed to make it truly interesting. To deepen and shape it. She was sorry she would be the one to help make him truly interesting. But she’d never apologize for falling in love with a man who already was.”
― Julie Anne Long, What I Did For a Duke

“Love, real love, the kind that you fall in, isn’t like Corinthians. The “suffereth long” and “is kind” nonsense. It’s like the Song of Solomon. It’s jealousy and fire and floods. It’s everything that consumes.”
― Julie Anne Long, A Notorious Countess Confesses

“I love you so much i can hardly tell my own heart from yours anymore, and I’ve never said it to another woman in my life as it’s never until now been true.”
― Julie Anne Long, How the Marquess Was Won

“Of course you’re sorry. The first words out of the mouths of men who are caught doing something they’re only too happy to continue until they’re caught.”
― Julie Anne Long, What I Did For a Duke

“He was still thoughtful. ‘Do you think any of us ever really knows anyone?’

Philosophy, Lord Dryden? And yet it’s daylight and everyone is still sober.”
― Julie Anne Long, How the Marquess Was Won

“He would ask nothing else from life if he would be allowed to protect and cherish her for the rest of his.”
― Julie Anne Long, What I Did For a Duke

“She was backing away from him now. Don’t go, was his first panicked thought. Followed by: Hurry up.”
― Julie Anne Long, What I Did For a Duke

“And though she could scarcely even feel them, her lips formed the words, and sound emerged, sounding frayed, and small and cracked, forged in her somehow before she was born, since before time, words meant only for him.
“I love you.”
Three of the most powerful words in the world offered to one of the most powerful men in London in such a small voice.
And at first she thought nothing at all had happened. He didn’t blink. But then she realized she’d somehow set him . . . softly ablaze. Emotion burned from him, and his eyes . . . she would never forget his eyes in this moment.
His hands remained at his sides.
Which is when she noticed they were trembling.
God help her, that’s when she felt tears begin to burn at the back of her eyes.
One got away. And she brushed her hand roughly against it.
And the man who never cleared his throat . . . cleared his throat. And his voice, in truth, wasn’t a good deal louder than hers.
“Then it’s just as well that I love you, Genevieve.”

― Julie Anne Long, What I Did For a Duke

More from the Author: https://amzn.to/3yv2rCb