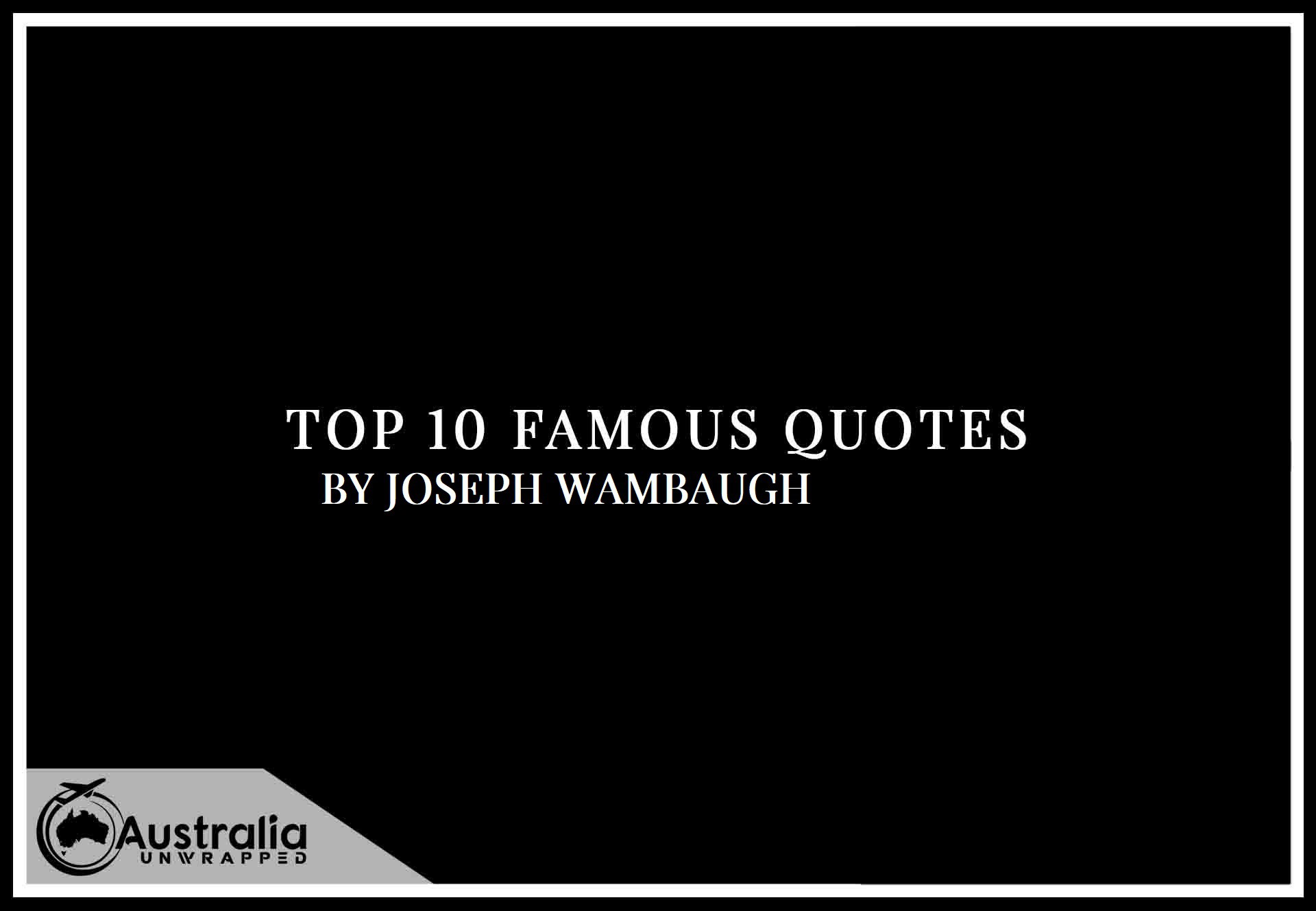 Quotes, who doesn’t love a good quote? This series of articles we look at Top 10 Famous Quotes by Author Joseph Wambaugh, author quotes are always a challenge and fun to pick, with Joseph Wambaugh you will find my Ten favorites of Joseph Wambaugh’s quotes.

Former LAPD detective sergeant Joseph Wambaugh is the author of twenty-one previous novels and nonfiction books, including The Choirboys and The Onion Field. In 1960, Wambaugh joined the Los Angeles Police Department (LAPD). During his 14 years of service, he rose to the rank of detective sergeant. Additionally, he earned a Bachelor of Arts and Master of Arts from California State University, Los Angeles.

Among his accomplishments was being named Grand Master by the Mystery Writers of America in 2004. He lives in southern California.

More from the Author: https://amzn.to/3AfzNpP

“seemed constant, even as to old opinions. Shelly now held a master’s degree from Notre”
― Joseph Wambaugh, Echoes in the Darkness

“And as Harold Bloomguard gulped nervously all three young men nodded at Scuz. “And another thing, I’m sorry I gotta give you some a the shitty jobs but we get a vice complaint we gotta investigate it. I wish I could just let you work fun things like gambling and call girls and bookmaking back offices and fancy bars with good drinks, but that usually ain’t what we gotta do. So try to have fun but don’t get hurt. That’s the only rule I got. You let yourself get hurt and I’ll break your arm!”
― Joseph Wambaugh, The Choirboys

“Flotsam said, “He thinks I shouldn’t do surfboard self-defense on four squids that flip us off and stole my juices when I was rippin’. They thought it was cooleo till one of them caught my log upside his head when I snaked him on the next wave.”

“All I said was,” Jetsam said to Flotsam, “You should cap the little surf Nazi if you wanna turn him into part of the food chain, not torpedo him till he’s almost dead in the foamy.”
― Joseph Wambaugh, Hollywood Crows

“When Vince was through talking that day, one of the grand jurors said, “Explain to me, to all of us, why in the world didn’t you at some time go to Mrs. Reinert and warn her?” And by now Vince knew he’d spend the rest of his life being asked that question. And by now he knew that even when the words were not being uttered, the eyes were asking it.”
― Joseph Wambaugh, Echoes in the Darkness

“Nothing could be more fearful than losing one’s freedom. To be confined. Never to see a golden cloudburst or rivers of sunlight on dark flowers. never to walk your own cultivated furrows. And the memory dangled over his heart like the sword of Damocles.”
― Joseph Wambaugh, The Onion Field

“No, policemen were not danger lovers, they were seekers of the awesome, the incredible, even the unspeakable in human experience. Never mind whether they could interpret, never mind if it was potentially hazardous to the soul. To be there was the thing.”
― Joseph Wambaugh, The Onion Field

“You have to experience it, in order to speak about it with authority. Joseph Wambaugh says it with an air of that same authenticity, in his stories of contemporary Police activities, and, with a disarming tongue in cheek, frankness. ”
― Joseph Wambaugh, The Choirboys

“Bill Bradfield gave Jack Holtz the stare, but Jack Holtz stared back and said, “That bullshit only works on intelligent people.”
― Joseph Wambaugh, Echoes in the Darkness

“I mean that a battered child has a marvelous capacity to adjust to his torture and will ceaselessly love his battering parents. I mean that the mother of a sexually molested child will not leave nor truly protect the child from the father as long as the man has a good job or otherwise preserves that mother from an economic life which is more horrifying to her than the molestation of her child. I mean that the weakness of the human race is stupefying and that it’s not the capacity for evil which astounds young policemen like you and me, Dean. Rather it’s the mind boggling worthlessness of human beings. There’s not enough dignity in mankind for evil and that’s the most terrifying thing a policeman learns.”

More from the Author: https://amzn.to/3AfzNpP