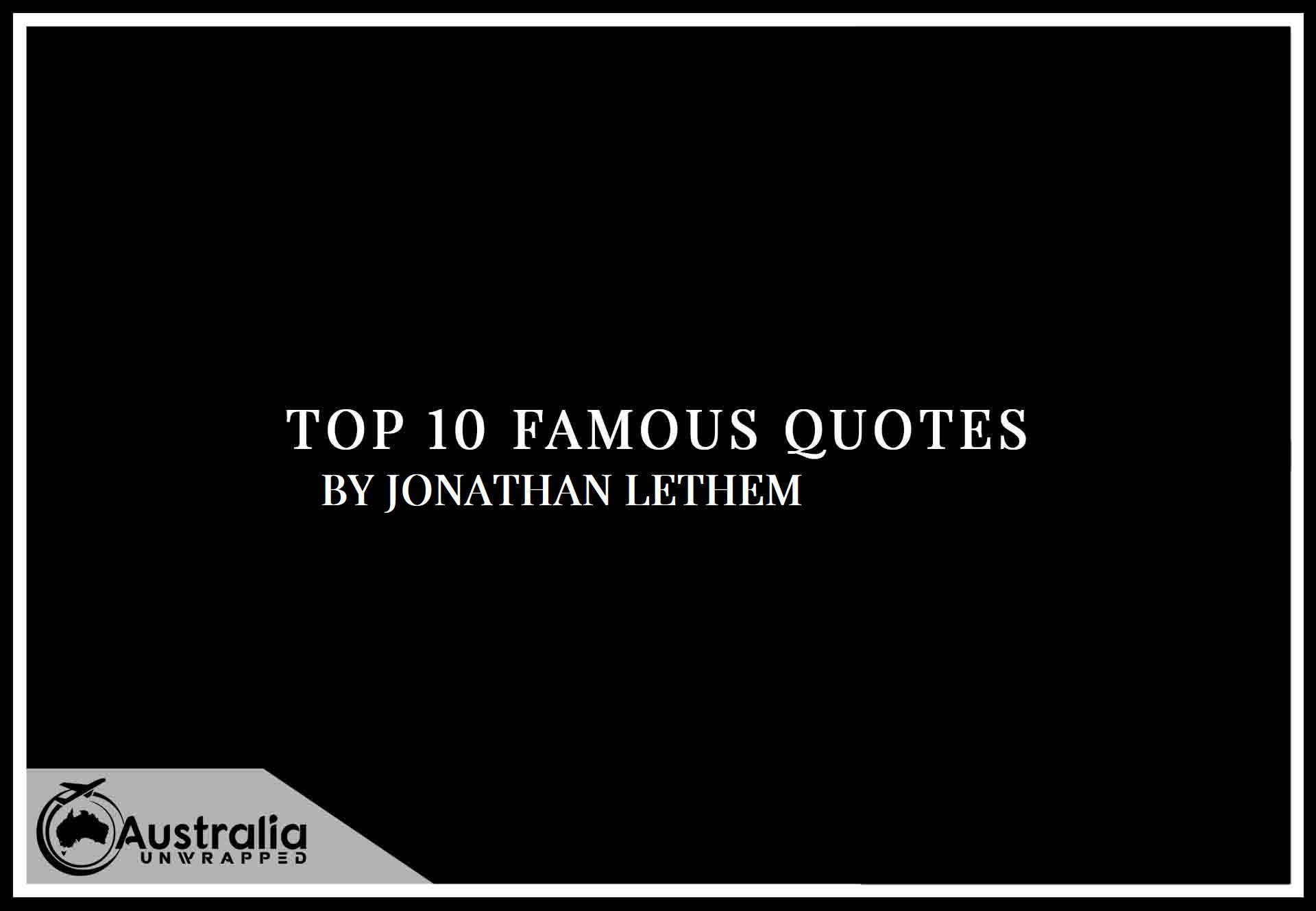 Quotes, who doesn’t love a good quote? This series of articles we look at Top 10 Famous Quotes by Author Jonathan Lethem, author quotes are always a challenge and fun to pick, with Jonathan Lethem you will find my Ten favorites of Jonathan Lethem’s quotes.

His first novel, Gun, with Occasional Music, a genre work that combines elements of science fiction and detective fiction, was published in 1994. Three more science fiction novels followed. Lethem published Motherless Brooklyn in 1999, which was awarded the National Book Critics Circle Award. He published The Fortress of Solitude in 2003, which became a New York Times best seller.

More from the Author: https://amzn.to/3NEGrsZ

“You can’t be deep without a surface”
― Jonathan Lethem, You Don’t Love Me Yet

“Insomnia is a variant of Tourette’s–the waking brain races, sampling the world after the world has turned away, touching it everywhere, refusing to settle, to join the collective nod. The insomniac brain is a sort of conspiracy theorist as well, believing too much in its own paranoiac importance–as though if it were to blink, then doze, the world might be overrun by some encroaching calamity, which its obsessive musings are somehow fending off.”
― Jonathan Lethem, Motherless Brooklyn

“Those promises we make to ourselves when we are younger, about how we mean to conduct our adult lives, can it be true we break every last one of them? All except for one, I suppose: the promise to judge ourselves by those standards, the promise to remember the child who would be so appalled by compromise, the child who would find jadedness wicked.”
― Jonathan Lethem

“Listen to me. I’m shy. I’m not stupid. I can’t meet people’s eyes. I don’t know if you understand what that’s like. There’s a whole world going on around me, I’m aware of that. It’s not because I don’t want to look at you, Lucinda. It’s that I don’t want to be seen.”
― Jonathan Lethem, You Don’t Love Me Yet

“As I get older I find that the friendships that are the most certain, ultimately, are the ones where you and the other person have made substantial amounts of money for one another.”
― Jonathan Lethem, Men and Cartoons: Stories

“I want what we all want,” said Carl. “To move certain parts of the interior of myself into the exterior world, to see if they can be embraced.”
― Jonathan Lethem, You Don’t Love Me Yet

“I learned to write fiction the way I learned to read fiction – by skipping the parts that bored me.
”
― Jonathan Lethem

“You could grow up in the city where history was made and still miss it all.”
― Jonathan Lethem, The Fortress of Solitude

“Someday I’d change my name to Shut Up and save everybody a lot of time.”
― Jonathan Lethem, Motherless Brooklyn

“What age is a black boy when he learns he’s scary?”
― Jonathan Lethem, The Fortress of Solitude

“Every room I’ve lived in since I was given my own room at eleven was lined with, and usually overfull of, books. My employment in bookstores was always continuous with my private hours: shelving and alphabetizing, building shelves, and browsing– in my collection and others– in order to understand a small amount about the widest possible number of books. Such numbers of books are constantly acquired that constant culling is necessary; if I slouch in this discipline, the books erupt. I’ve also bricked myself in with music–vinyl records, then compact discs. My homes have been improbably information-dense, like capsules for survival of a nuclear war, or models of the interior of my own skull. That comparison–room as brain– is one I’ve often reached for in describing the rooms of others, but it began with the suspicion that I’d externalized my own brain, for anyone who cared to look.”

More from the Author: https://amzn.to/3NEGrsZ