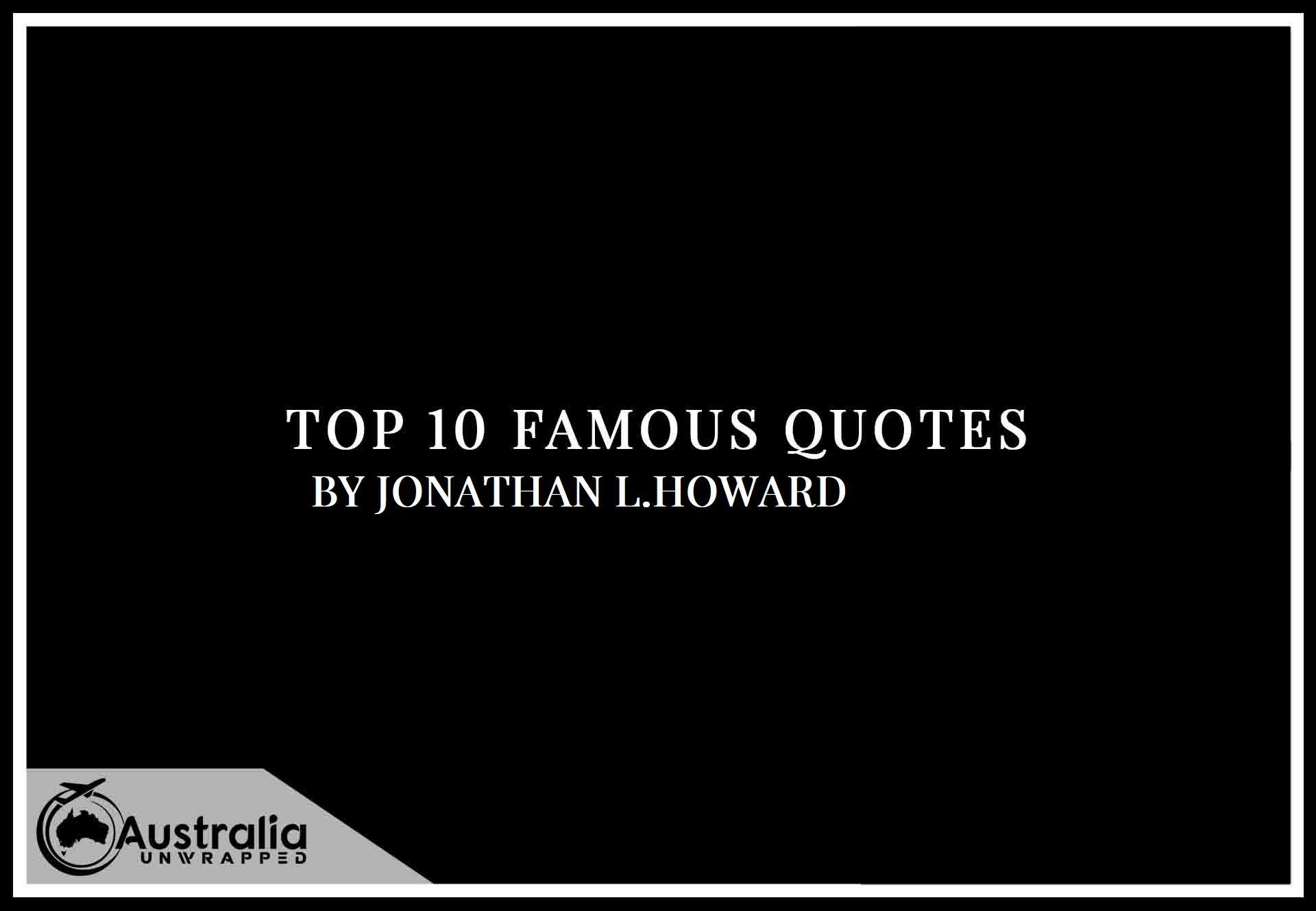 Jonathan L Howard has been designing and writing computer games since the early 1990s, including titles such as ‘Broken Sword’.

Two short stories featuring Johannes Cabal (Johannes Cabal and the Blustery Day and Exeunt Demon King) were published in H. P. Lovecraft’s Magazine of Horror in 2009, and Johannes Cabal the Necromancer in 2010.

There have been three sequels since then, and a fourth is expected in 2016. Additionally, he has written two novels in the YA SF “Russalka Chronicles” series, as well as the ongoing “Goon Squad” series. In October 2015, the first novel in a new series, “Carter & Lovecraft,” will be released.

More from the Author: https://amzn.to/3OEowUz

“No churchmen, I notice. Of course not. What use have they for a world without irrational fear?”
― Jonathan L. Howard, The Fear Institute

“Horst passed him a bottle he had picked up in his rapid trip from there to here. Remarkably, it’s contents had survived the transit. “Drink this,” he said, unmoved by Cabal’s anger. “You need to save your voice for your next session.”
Cabal took the bottle testily and swigged from it. there was a moments pause, just long enough for Cabal’s expression to change from testy to horrified revulsion. He spat the liquid violently onto the grass like a man who has got absent-minded with the concentrated nitric acid and a mouth pipette. He glared at Horst as he took off his spectacles and wiped his suddenly weeping eyes “Disinfectant? You give me disinfectant to drink?”
Horst’s surprise was replaced with mild amusement. “It’s root beer, Johannes. Have you never had root beer?”
Cabal looked suspiciously at him, then at the bottle “People drink this?”
“Yes.”
“For non-medical reasons?”
“That’s right.”
Cabal shook his head in open disbelief. “They must be insane.”
― Jonathan L. Howard, Johannes Cabal the Necromancer

“Not entirely fair?” His voice became that of the inferno: a rushing, booming howl of icy evil that flew around the great cavern, as swift and cold as the Wendigo on skates. “I am Satan, also called Lucifer the Light Bearer…”
Cabal winced. What was it about devils that they always had to give you their whole family history?
“I was cast down from the presence of God himself into this dark, sulfurous pit and condemned to spend eternity here-“
“Have you tried saying sorry?” interrupted Cabal.
“No, I haven’t! I was sent down for a sin of pride. It rather undermines my position if I say ‘sorry’!”
― Jonathan L. Howard, Johannes Cabal the Necromancer

“There is possibly no insult so calculated to sting the English as the suggestion that they may at any time be considered foreign, as this flies in the face of the obvious truth that the whole of Creation actually belongs to the English, and that they are just allowing everybody else to camp out on bits of it from a national sense of noblesse oblige.”
― Jonathan L. Howard, Johannes Cabal the Detective

Cabal had a brief mental image of Aristotle walking halfway across an open field before unexpectedly disappearing in a fireball. Descartes and Nietzsche looked on appalled. He pulled himself together.”
― Jonathan L. Howard, Johannes Cabal the Necromancer

“They served to remind Cabal – should a reminder ever be necessary – why his social skills were so poor: people were loathsome and not worth the practise.”
― Jonathan L. Howard, Johannes Cabal the Detective

“You’ve had your warning, Cabal. Now, prepare to face the terrible arcane wrath of Maleficarus!” Somewhere, a sheep bleated and quite ruined the effect.”
― Jonathan L. Howard, Johannes Cabal the Necromancer

“Cats, as any rational person knows, are solitary, opportunistic, ambush predators, much like spiders, but with fewer legs and a better fan club.”
― Jonathan L. Howard, The Fear Institute

“You’re familiar with the theory of evolution?” asked Cabal.
“Sir?”
“They’re about to find out why intelligence is a survival trait.”
― Jonathan L. Howard

“Well, if I ever suffer brain damage I know there’s always a career waiting for me in local politics.”
― Jonathan L. Howard, Johannes Cabal the Necromancer

“Lo!” cried the demon. “I am here! What dost thou seek of me? Why dost thou disturb my repose? Smite me no more with that dread rod!” He looked at Cabal. “Where’s your dread rod?”
“I left it at home,” replied Cabal. “Didn’t think I really needed it.”
“You can’t summon me without a dread rod!” said Lucifuge, appalled.
“You’re here, aren’t you?”
“Well, yes, but under false pretences. You haven’t got a goatskin or two vervain crowns or two candles of virgin wax made by a virgin girl and duly blessed. Have you got the stone called Ematille?”
“I don’t even know what Ematille is.”
Neither did the demon. He dropped the subject and moved on. “Four nails from the coffin of a dead child?”
“Don’t be fatuous.”
“Half a bottle of brandy?”
“I don’t drink brandy.”
“It’s not for you.”
“I have a hip flask,” said Cabal, and threw it to him. The demon caught it and took a dram.
“Cheers,” said Lucifuge, and threw it back. They regarded each other for a long moment. “This really is a shambles,” the demon added finally. “What did you summon me for, anyway?”

More from the Author: https://amzn.to/3OEowUz