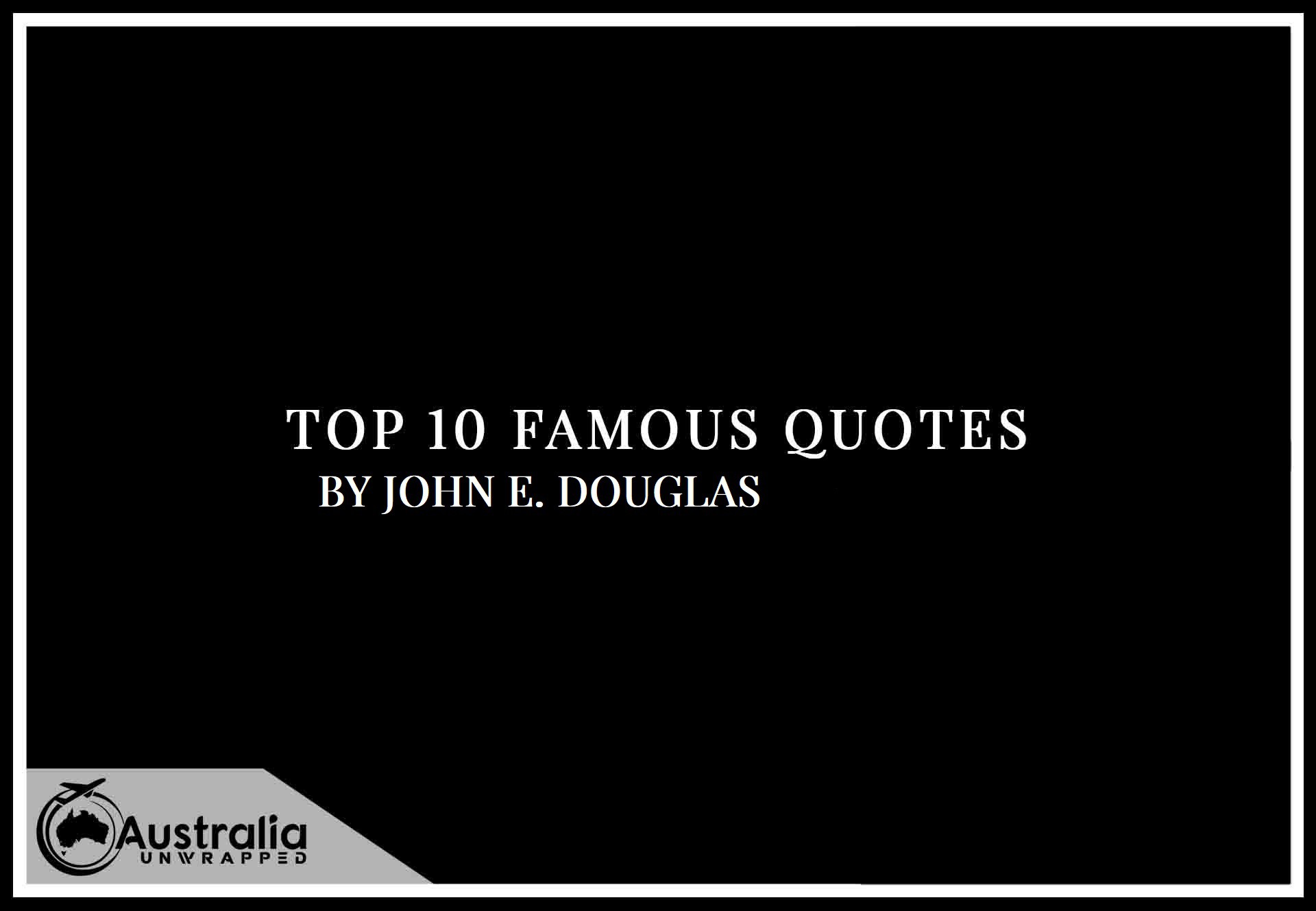 Love reading? Then it’s likely you will love a good quote from your favourite author. This article covers John E. Douglas’s Top 10 Popular and Famous Quotes that we at Australia Unwrapped have collected from some of his greatest works. John E. Douglas quotes to remember and here you will find 10 of the best. A memorable quote can stay with you and can be used along your journey. Choosing John E. Douglas’s top 10 quotes is not easy, but here they are:

“I’ve come out many times publicly in support of the death penalty. I’ve stated that I’d be more than willing personally to pull the switch on some of the monsters I’ve hunted in my career with the FBI. But Bruno Hauptmann just doesn’t fit into this category — the evidence just wasn’t, and isn’t, there to have confidently sent him to the electric chair. To impose the one sentence for which there is no retroactive correction requires a far higher standard of proof than was seen here. Blaming him for the entire crime was, to my mind, an expedient and simpleminded solution to a private horror that had become a national obsession.”
― John E. Douglas, The Cases That Haunt Us

“By studying as many crimes as we could, and through talking to the experts—the perpetrators themselves—we have learned to interpret those clues in much the same way a doctor evaluates various symptoms to diagnose a particular disease or condition. And just as a doctor can begin forming a diagnosis after recognizing several aspects of a disease presentation he or she has seen before, we can make various conclusions when we see patterns start to emerge.”
― John E. Douglas, Mindhunter: Inside the FBI’s Elite Serial Crime Unit

“Serial murder may, in fact, be a much older phenomenon than we realize. The stories and legends that have filtered down about witches and werewolves and vampires may have been a way of explaining outrages so hideous that no one in the small and close-knit towns of Europe and early America could comprehend the perversities we now take for granted. Monsters had to be supernatural creatures. They couldn’t be just like us.”
― John E. Douglas, Mindhunter: Inside the FBI’s Elite Serial Crime Unit

“Behavior reflects personality. The best indicator of future violence is past violence. To understand the “artist,” you must study his “art.” The crime must be evaluated in its totality. There is no substitute for experience, and if you want to understand the criminal mind, you must go directly to the source and learn to decipher what he tells you. And, above all: Why + How = Who.”
― John E. Douglas, Mindhunter: Inside the FBI’s Elite Serial Crime Unit

“One of the first things every trainee is taught is that an FBI agent only shoots to kill. The thinking that went into this policy is both rigorous and logical: if you draw your weapon, you have already made the decision to shoot. And if you have made the decision that the situation is serious enough to warrant shooting, you have decided it is serious enough to take a life.”
― John E. Douglas, Mindhunter: Inside the FBI’s Elite Serial Crime Unit

“[Talking about Monte Rissell] …and like Ed Kemper he was able to convince the psychiatrist he was making excellent progress while he was actually killing human beings. This is kind of a sick version of the old joke about how many psychiatrists it takes to change a light bulb. The answer being, just one, but only if the light bulb wants to change.”
― John E. Douglas, Mindhunter: Inside the FBI’s Elite Serial Crime Unit

“As with everything else in my life, I decided that if we were all going to get through this in one piece, I’d better have a sense of humor.”
― John E. Douglas, Mindhunter: Inside the FBI’s Elite Serial Crime Unit

“There are certain crimes that are simply too cruel, too sadistic, too hideous to be forgiven.”
― John E. Douglas, Journey Into Darkness

“When rehabilitation works, there is no question that it is the best and most productive use of the correctional system. It stands to reason: if we can take a bad guy and turn him into a good guy and then let him out, then that’s one fewer bad guy to harm us. . . .

Where I do not think there is much hope. . .is when we deal with serial killers and sexual predators, the people I have spent most of my career hunting and studying. These people do what they do. . .because it feels good, because they want to, because it gives
them satisfaction. You can certainly make the argument, and I will agree with you, that many of them are compensating for bad jobs, poor self-image, mistreatment by parents, any number of things. But that doesn’t mean we’re going to be able to rehabilitate them.”