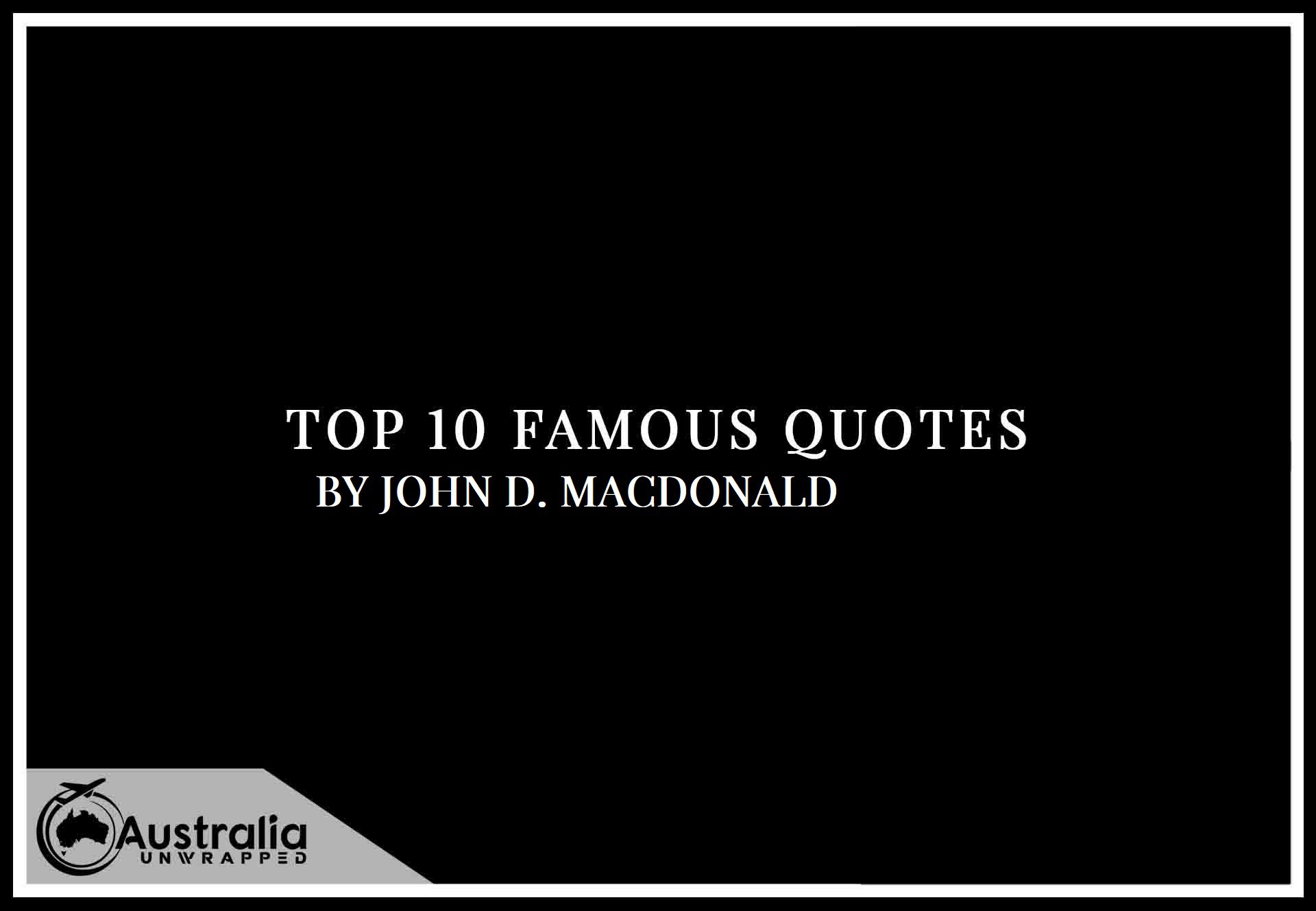 Love reading? Then it’s likely you will love a good quote from your favourite author. This article covers John D. MacDonald’s Top 10 Popular and Famous Quotes that we at Australia Unwrapped have collected from some of his greatest works. John D. MacDonald quotes to remember and here you will find 10 of the best. A memorable quote can stay with you and can be used along your journey. Choosing John D. MacDonald’s top 10 quotes is not easy, but here they are:

“If the cards are stacked against you, reshuffle the deck.”
― John D. MacDonald

“Old friend, there are people—young and old—that I like, and people that I do not like. The former are always in short supply. I am turned off by humorless fanaticism, whether it’s revolutionary mumbo-jumbo by a young one, or loud lessons from scripture by and old one. We are all comical, touching, slapstick animals, walking on our hind legs, trying to make it a noble journey from womb to tomb, and the people who can’t see it all that way bore hell out of me.”
― John D. MacDonald, Dress Her in Indigo

“Integrity is not a conditional word. It doesn’t blow in the wind or change with the weather. It is your inner image of yourself, and if you look in there and see a man who won’t cheat, then you know he never will. Integrity is not a search for the rewards of integrity. Maybe all you ever get for it is the largest kick in the ass the world can provide. It is not supposed to be a productive asset.”
― John D. MacDonald

“At times it seems as if arranging to have no commitment of any kind to anyone would be a special freedom. But in fact the whole idea works in reverse. The most deadly commitment of all is to be committed only to one’s self. Some come to realize this after they are in the nursing home.”
― John D. MacDonald, The Lonely Silver Rain

“I am wary of the whole dreary deadening structured mess that we have built into such a glittering top-heavy structure that there is nothing left to see but the glitter, and the brute routines of maintaining it.”
― John D. MacDonald, The Deep Blue Good-By

“…there are people who try to look as if they are doing a good and thorough job, and then there are the people who actually damn well do it, for its own sake.”
― John D. MacDonald, Free Fall in Crimson

“A woman who does not guard and treasure herself cannot be of very much value to anyone else.”
― John D. MacDonald, The Deep Blue Good-By

“We were about to give up and call it a night when somebody threw the girl off the bridge.”
― John D. MacDonald, Darker Than Amber

“Being an adult means accepting those situations where no action is possible.”
― John D. MacDonald, The Green Ripper

“A man with a credit card is in hock to his own image of himself.”
― John D. MacDonald, The Deep Blue Good-By

“I do not like the killers, and the killing bravely and well crap. I do not like the bully boys, the Teddy Roosevelt’s, the Hemingways, the Ruarks. They are merely slightly more sophisticated versions of the New Jersey file clerks who swarm into the Adirondacks in the fall, in red cap, beard stubble and taut hero’s grin, talking out of the side of their mouths, exuding fumes of bourbon, come to slay the ferocious white-tailed deer. It is the search for balls. A man should have one chance to bring something down. He should have his shot at something, a shining running something, and see it come a-tumbling down, all mucus and steaming blood stench and gouted excrement, the eyes going dull during the final muscle spasms. And if he is, in all parts and purposes, a man, he will file that away as a part of his process of growth and life and eventual death. And if he is perpetually, hopelessly a boy, he will lust to go do it again, with a bigger beast.”