Jessica Mauboy Concert On 09-09-2022 At Manly NSW, The Barracks Precinct 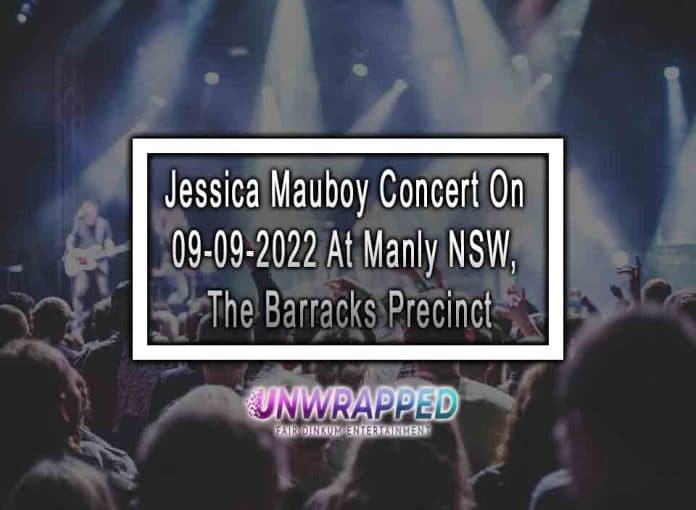 Jessica Mauboy, the multi-ARIA award-winning singer-songwriter, actor, and voice coach, is entering a pivotal year in 2022 after a rebirth year in 2021. Jessica Mauboy returns to the potential stage for the sure-to-be-incredible first night of Night at The Barracks North Head, Manly, making new songs and maintaining her role as a leader and disruptor.

Jessica’s global mega tunes from her debut solo album in 2008 will be featured in this thrilling new event, which will elevate them to a new era of empowerment. Jessica Mauboy is a triple threat: an award-winning actress, an award-winning musician (she’s also an outstanding songwriter), and an extremely engaging and charismatic performer. You’ll recognize a Mauboy song when you hear it because Jess makes each song unique, with trills that are readily identifiable as hers.

The ancient and picturesque North Head Barracks in Sydney will host live music for the first time when it hosts a new concert series called Night At The Barracks. Night At The Barracks will showcase various live music, theatre, ballet, dance, opera, and jazz acts during September and October. In addition to the acts mentioned above, the lineup includes Jessica Mauboy, Josh Pyke, The Rubens, Winston Surfshirt, and Tim Finn.

David Campbell, James Morrison Motown Experience, The Tap Pack, Australian Rock Collective playing The Beatles’ “Let It Be” album, David Hobson & Lucy Durack, and Bjorn Again are among the other artists participating. Rafael Bonachela’s ‘Impermanence’ and the legendary duet from ‘ab [intra]’ will also be performed by the Sydney Dance Company in an exclusive double bill. In contrast, John Foreman and the Australian Pops Orchestra will perform beloved favorites at Symphony Under the Stars.

Jessica Hilda Mauboy is an actress and singer from Australia. As a finalist on the 4th season of Australian Idol in 2006, she was signed to Sony Music Australia and released her debut album, ‘It’s All About the Music.’ Mauboy launched her debut studio album, Been Waiting, the following year after releasing a live CD of her Idol performances and temporarily being a part of the girl group Young Divas. “Burn” was her first number-one single, and the album was certified double platinum by the Australian Recording Industry Association in 2009. (ARIA). When she released Get them Girls in 2010, she introduced a more aggressive R&B style that went platinum 4 times over.