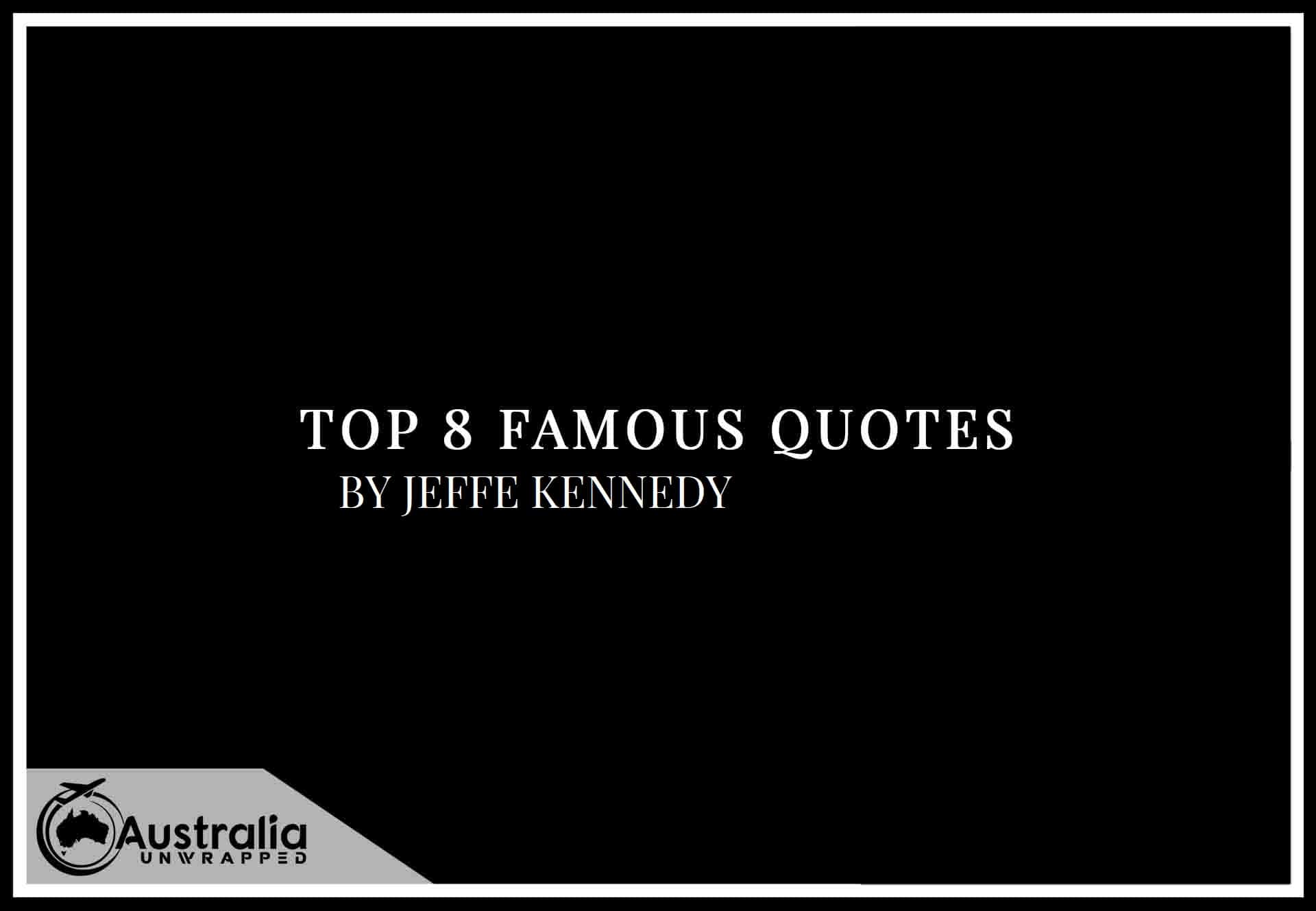 Love reading? Then it’s likely you will love a good quote from your favourite author. This article covers Jeffe Kennedy’s Top 8 Popular and Famous Quotes that we at Australia Unwrapped have collected from some of his greatest works. Jeffe Kennedy quotes to remember and here you will find 8 of the best. A memorable quote can stay with you and can be used along your journey. Choosing Jeffe Kennedy’s top 8 quotes is not easy, but here they are:

“What are we supposed to be doing?” Lonen
whispered, though High Priestess Febe had left the room.

“Meditating,” she hissed back.

“Yes, I heard that part. What in Arill does that mean?”

He was quiet for a few breaths, no more. “Now
what?”

She tried to suppress the laugh, but failed
so it choked out in a most unladylike sound. Lonen flashed a grin at her and she shook her head. “Keep doing it. And be quiet—she could come back at any time.”

“Why would I keep doing something I already
did?”

“You’re supposed to be contemplating!” She
tried to sound stern, but his complaints so closely echoed hers through the years that she couldn’t manage it.

“Contemplate what?” he groused. “I already
made the decision about the step I’m about to take. There’s no sense revisiting it.”

“Then pretend. It won’t be that much longer.”

He stayed quiet for a bit more, though he
shifted restlessly, looking around the room and studying the various representations of the moons, looking at her from time to time. That insatiable curiosity of his built, feeding into her sgath, slowly intensifying. She was so keenly aware of him, she
knew he’d speak the moment before he did.

“You talking when we’re supposed to be
meditating?”

“Do you always do what the temple tells you
to do?”

“Hardly ever,” she admitted. “But appearances
are critical. Especially now.”

He sighed and was quiet for a while. But his
question remained between them, tugging at her like Chuffta pulling her braids when he wanted attention. And it might be some time before Febe returned. She reached out with her sgath to keep tabs on the high priestess, who was indeed still in one of the inner sanctums, no doubt also meditating and preparing herself for the ritual.

“We have a little time and I’ll give us
warning,” she relented. “Do I mind what?”

“Not having a special dress, a big celebration. I don’t have a beah for you.”

“A Destrye gifts his bride with a beah and she wears it as a symbol of their marriage. I thought I’d have
time to find something to stand in place of it until I can give you a proper one. And that we’d have time to change clothes.”

“You look fine—I told you before.”

“I look like a Báran,” he grumped, then glared, annoyance sparking when she giggled. “It’s not funny.”

“Báran clothes look good on you,” she
soothed, much as she would Chuffta’s offended dignity. Perhaps males of all species were the same.

She ignored Chuffta’s indignant response.
Lonen did look appealing in the silk pants and short-sleeved shirt, even though her sgath mainly showed her his exuberant masculine presence.

“Well, you deserve something better than that robe,” he replied. “And more than this hasty ceremony. Arill knows, Natly went on enough about the details of planning…” He trailed off, chagrin coloring his thoughts.

“Yeah,” she drawled. “Maybe better to not
bring up your fiancée during our actual wedding ceremony.”

“Former fiancée,” he corrected. “Really not even that. And this isn’t the ceremony yet—this is waiting around for it to start. My knees are getting sore.”

“And here I thought you were the big, bad warrior.”

“I am. Big, bad warriors don’t kneel. We charge about, swinging our weapons.”

She laughed, shaking her head at him. That
good humor of his flickered bright, charming her, banishing his perpetual anger to the shadowed corners of his aura. In the back of her mind, Febe moved. “She’s coming back. Not much longer. Try to
school your thoughts.”
― Jeffe Kennedy, Oria’s Gambit

“Shall we get to the subject at hand?” she
suggested in an even tone.

“You didn’t answer my question.”

“Because the answer doesn’t matter. What I
do or do not believe has no bearing on our negotiations. We could
argue all night about our differences and it seems both our peoples
have wasted enough time doing that already. What terms do you
propose?”

She actually made snorting noise, at odds
with her regal poise. “No wonder you all spent so many days
discussing. If I’m not mistaken, you’re in the position of power.
It seems to me that this conversation should consist of you, the
conqueror, giving terms to me, the conquered—at which point I
attempt to weasel out whatever concessions I can.”
― Jeffe Kennedy, Lonen’s War

“She floated through gray mists, remembering them from before. Which helped her not fight them. Instead, she accepted the way the mists wrapped her in cocoons of enshrining silk that healed her, as if she were a butterfly, soon to emerge with damp wings and no more duties than kissing flowers. That might be lovely—a life of nothing but the sugar offered by flowers and the sun on her colorful self, bringing a sigh of joy to someone’s lips.

“Until a bird snapped you up.”

She knew that wry mind-voice, too. Chuffta, her Familiar. Memories came back faster this time, too—good.”
― Jeffe Kennedy, Oria’s Gambit

“Believe me, I know. I used to think that it only happened once, your single opportunity to make good. But now I think – no, know – that love is abundant. That’s Glorianna’s gift to us. That we love, over and over, many times and many people. You’re one of them. I love you, Ash.”
He crossed to me, tentative, and lifted his hands to cup my naked breasts. “Your tits are so much larger,”he commented.”
― Jeffe Kennedy, The Tears of the Rose

“Something in us recognizes magic when we encounter it. Whether we believe in it consciously or not. It affects us and the choices we make.”
― Jeffe Kennedy, Master of the Opera Act 1: Passionate Overture

“It occurs to me that one can only beat
one’s head against a wall for so long before determining that the
wall is harder than one’s head.”
― Jeffe Kennedy, Lonen’s War

“This is why it’s perilous to ignore a librarian.”
― Jeffe Kennedy, The Mark of the Tala