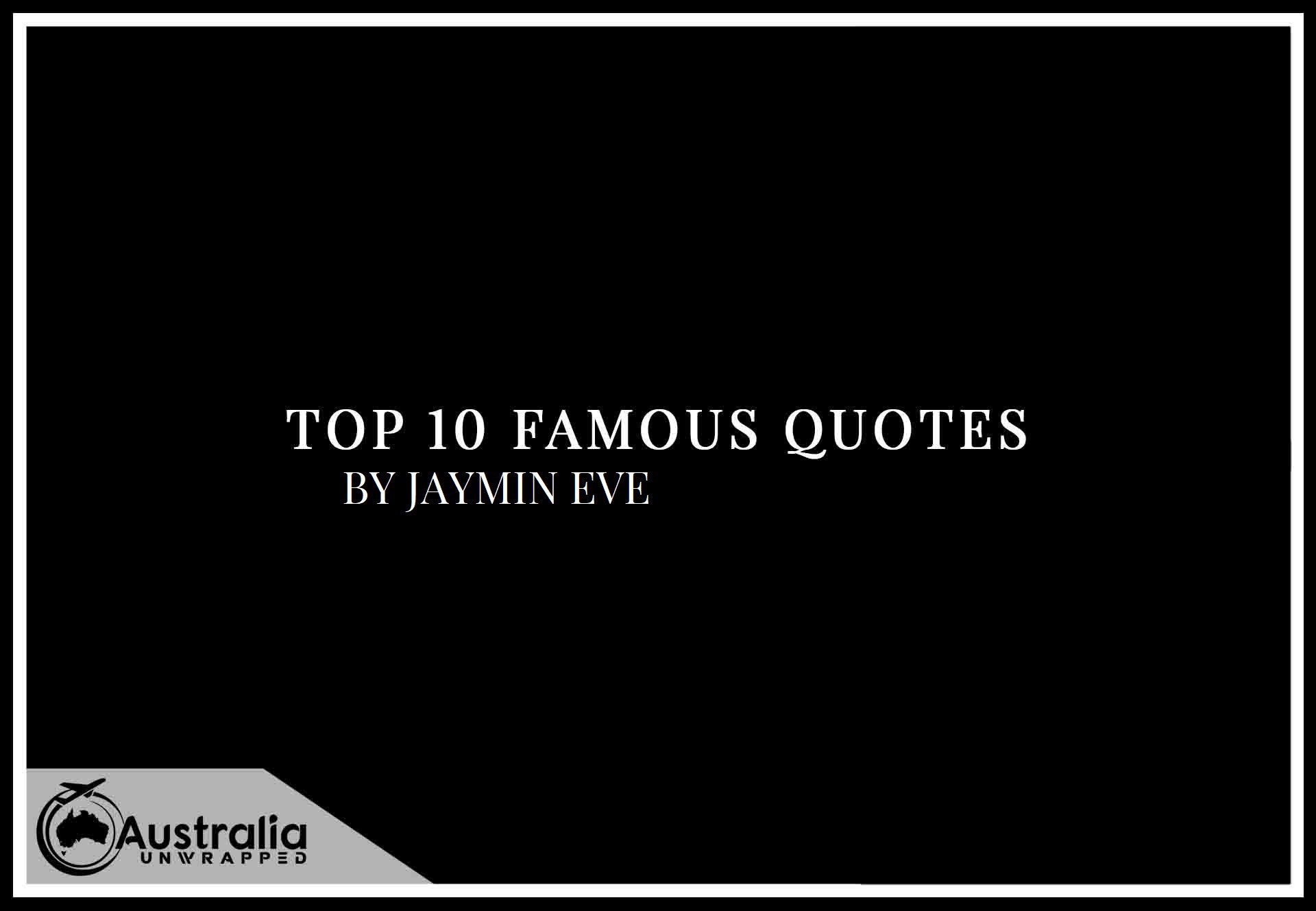 Love reading? Then it’s likely you will love a good quote from your favourite author. This article covers Jaymin Eve’s Top 10 Popular and Famous Quotes that we at Australia Unwrapped have collected from some of his greatest works. Jaymin Eve quotes to remember and here you will find 10 of the best. A memorable quote can stay with you and can be used along your journey. Choosing Jaymin Eve’s top 10 quotes is not easy, but here they are:

“Sorry I hit you. I thought you were going to keep talking, and I panicked.”
― Jaymin Eve, Trickery

“I’m sick of them. I never want to see them again. Except Aros; he smells nice. And Rome; because he’s so strong I’m pretty sure not even Rau can get past him. I don’t need the others. Except Siret. I’m pretty sure he hates me, but he’s really good at catching me like just before I face-plant into something. But the others, I don’t need them. Not at all.” I paused, my brow furrowing, my mouth pursing, and then I quickly blurted, “Except Coen and Yael. Coen is really good at making decisions, and if I leave out Yael he’ll probably hunt me down and haunt me-”
“That’s all of them,” Emmy interrupted smoothly.”
― Jaymin Eve, Trickery

“He dropped my hand, and I knew that he was moments away from kicking the door down like a crazy, deranged sol, so I quickly raised my fist and knocked. They all turned to stare at me, looking like I’d just stolen their favourite toy and ripped its head off. “What?” I asked defensively. “Just trying to be polite.” “We’re here to kill her,” Siret reminded me, his voice a frustrated groan. “Don’t see why we can’t kill her politely,”
― Jaymin Eve, Trickery

“Dammit, it’s not fair,” I growled .
“Your dragon has them all cowering like rabbits.” One of the weaker shifter animals. “Why is it that no one shows my wolf her due respect?”
He laughed . “It might be a dog eat dog world, but … a dragon eats everyone.”

“Go to sleep, dweller-baby. I’ll kill Elowin as soon as we find her.” He didn’t sound like he was kidding. Each word was low and laced with truth.

“Next time, just say like … sleep well, or something normal,” I said. “Not go to sleep, I’ll be murdering someone in no time. It doesn’t sound as comforting as you think it does.”
― Jaymin Eve, Trickery

“We won’t let you die, Willa.” I mimicked, brushing off my boy-clothes and shoving my hair out of my face. “We’ll just teleport you onto a platform in the sky, where you’re definitely going to die, while we wait in our little safety-cave.”
― Jaymin Eve, Trickery

“In ten years I’d never had an interesting teacher. I was beginning to think they were myths, like unicorns and comfortable high heels.

“I’m going to stop you right there, because the crazy train has already left the station and I think you missed your seat.”
― Jaymin Eve, Dragon Mystics

“Where’s the creativity, gods? I didn’t see why Death couldn’t have pink. Or purple. What if he liked sparkles?”
― Jaymin Eve, Trickery

“It’s your own fault, Will. What did I tell you about walking?” “That I should leave it to the experts,”
― Jaymin Eve, Trickery

10 quotes by Jaymin Eve there you go! It’s never an easy task picking the best quotations from great writers, so please if you disagree or have more to add, please comment and share your opinions. My 10 greatest Jaymin Eve quotes will likely be different from yours; however, that’s the best thing about them, each quote can mean something different to each person. So don’t wait, comment and shares your best Jaymin Eve Quote.

“She was smart like that, and lucky like that, and people loved the hell out of her. They didn’t love the hell out of me; they ran the hell away from me. It wasn’t like I was a bad person or anything, I just … had a lot of accidents. I didn’t mean accidents like I ate glue and then peed myself on a regular basis. I just tripped more than usual, and accidently set things on fire more than what would be considered ‘normal’. I got kicked out of the village school only one moon-cycle before graduation for accidently making one of the teachers bald. How do you accidently make someone bald? That’s a good question. All you really need is a bucket of warm tar to accidently toss onto the back of their head. How do you get a bucket of warm tar? You don’t go looking for it or anything—or at least I didn’t. It was just sitting on the road outside the school and I thought I should carry it inside to ask what it was.”