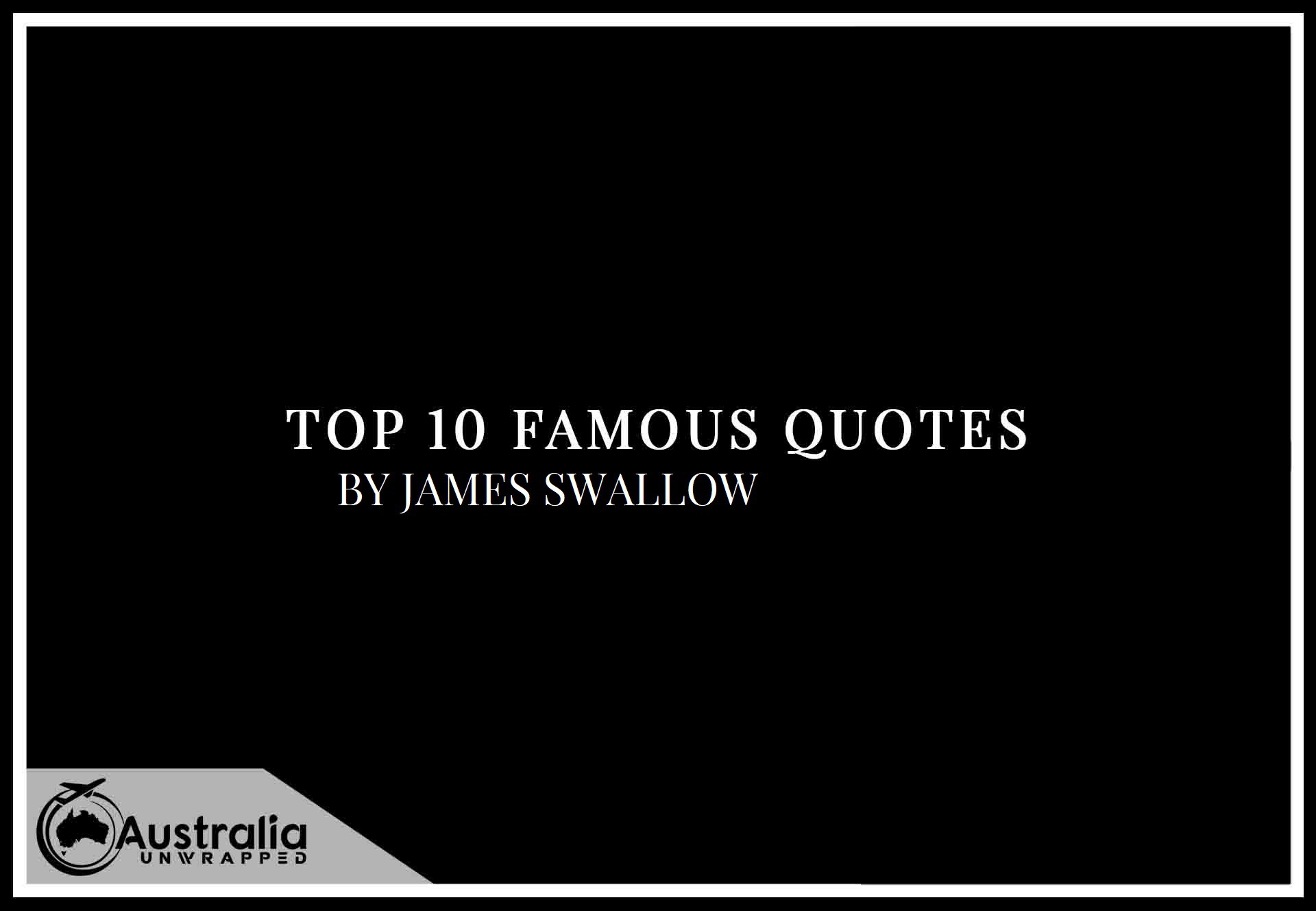 Love reading? Then it’s likely you will love a good quote from your favourite author. This article covers James Swallow’s Top 10 Popular and Famous Quotes that we at Australia Unwrapped have collected from some of his greatest works. James Swallow quotes to remember and here you will find 10 of the best. A memorable quote can stay with you and can be used along your journey. Choosing James Swallow’s top 10 quotes is not easy, but here they are:

“The figure was clad head-to-toe in the same kind of matt black tactical gear utilized by the MI6 OpTeams, his head was hidden behind a mesh balaclava and clumsy night-vision goggles that gave the shooter a bug-eyed aspect. Marc recognized the long, heavy frame of the pistol in the man’s hand. A silenced Mark 23 semi-automatic, the same kind of weapon favoured by American SOCOM operatives.
He had no desire to see the gun up close, however, and when the shooter turned away to look to the stern, Marc slipped down the stairwell and moved as fast as he dared past the doors of the passenger deck. At each compartment he paused for a count of three, holding his breath to listen. Nothing.
Amidships, he came across an open door and used the muzzle of the Glock to nudge the gap a little wider. He swept left and right, finding no threats”
― James Swallow, Nomad

“I built Rubicon from ashes,’ said the other man. ‘Ashes of war. I have worked hard to raise myself up from the poverty I was born into. Believe me when I tell you I have seen every kind of injustice, all across the heartland of my mother Africa. And now I have made billions of dollars from land and mining and technology. Now I can do something about it. As Lucy says, I am a very rich man.’ He reached up to his neck and pulled out the silver chain between his fingers. ‘I see you looking at this. Do you recognize it?’
Marc gave a slow nod. Now it was clear to him, he could see that the odd bit of discoloured metal was actually part of a weapon. It was the trigger from an AK-47 assault rifle.”
― James Swallow, Nomad

“So you’re ex-Royal Navy, right?’
He tensed. ‘How do you know that?’
Lucy pointed at his arm. ‘Cabot wristwatch. It’s a dead giveaway.’ Marc frowned. The military-issue dive watch was the only connection he still had to that part of his past. ‘And also my boss is a billionaire, remember?’ The woman went on. ‘Information gets bought real easy, if you know how to deal.’ She smiled again. ‘So you’re all about Queen and Country. From navy puke to covert spook, all for the union jack.’
‘Something like that,’ he muttered. ‘And just so you know, we only call the flag the ‘union jack’ if it’s flying on a ship.”
― James Swallow, Nomad

“was something different about his genetic structure. His ex-lover Megan Reed had once told him he was a ‘super-compatible’, a rare human anomaly who could accept augs without the yoke of the anti-rejection drug to keep him whole. Jensen was still undecided if that was a gift or a curse, and he couldn’t stop himself from wondering if this unique quality was some loose thread left behind by other unanswered questions from his past. Questions”
― James Swallow, Deus Ex: Black Light

“He was dying when I discovered him, you understand? But even in those moments I realised what kind of being I had found. A kindred spirit. Something nigh-immortal, with an intellect I could actually spar with.’ He sighed. ‘So few can match me. Can you blame me for wanting someone to talk to? A confidante to keep me sane?”
― James Swallow, The Buried Dagger

“So,’ Lucy said to the air, ‘not lucky, then.’
Through the PSG-1’s scope, she could see the Brit standing stock still, and a sliver of the assault team operator holding him up. It was impossible to get a good look at the gunman. From her angle across the park, a cluster of vents prevented the sniper from seeing all of him”
― James Swallow, Nomad

“In his hand, Marc still had the Glock semi-automatic. Both of them knew what should happen next. The right choice, the expedient choice, was to put a bullet in this man’s head and keep running.
Marc kept running”
― James Swallow, Nomad

“You make it sound like the end of the world,” said Pritchard. “Not yet,” Jensen told him, as he walked away, “but you can see it from here.”
― James Swallow, Deus Ex: Black Light

“get us some little jeeps. Maybe like those moon-buggies they used to have on The Banana Splits.”
― James Swallow, Relativity

“There was no movement around the discoloured walls, and Lucy turned the Land Rover about in a slow crawl, the tires crunching on the desiccated earth. She scanned the windows, black squares punched through the sides of the silent blockhouses, looking for threats.
As the grumble of the engine died, Marc heard the moan of the steady breeze, and the desolate cluster of buildings seemed like the loneliest place on Earth.
‘Stay alert,’ said Lucy, reaching down into the wheel well to grab her backpack. ‘We don’t know what we’re gonna find here.’ She reached inside and her hand came back with the compact shape of an MP7 sub machinegun. She cocked it with a snap of the receiver, and handed Marc a walkie-talkie. ‘Just in case,’ she added.
Marc followed her out of the Land Rover, slipping out of the door with his bag over one shoulder. He had the Glock ready, close to his chest and his finger resting on the trigger guard. He felt acutely aware of every tiny detail around them, the crumbling rocks beneath his boots, the heavy heat of the late afternoon sun, the weight of the loaded gun”