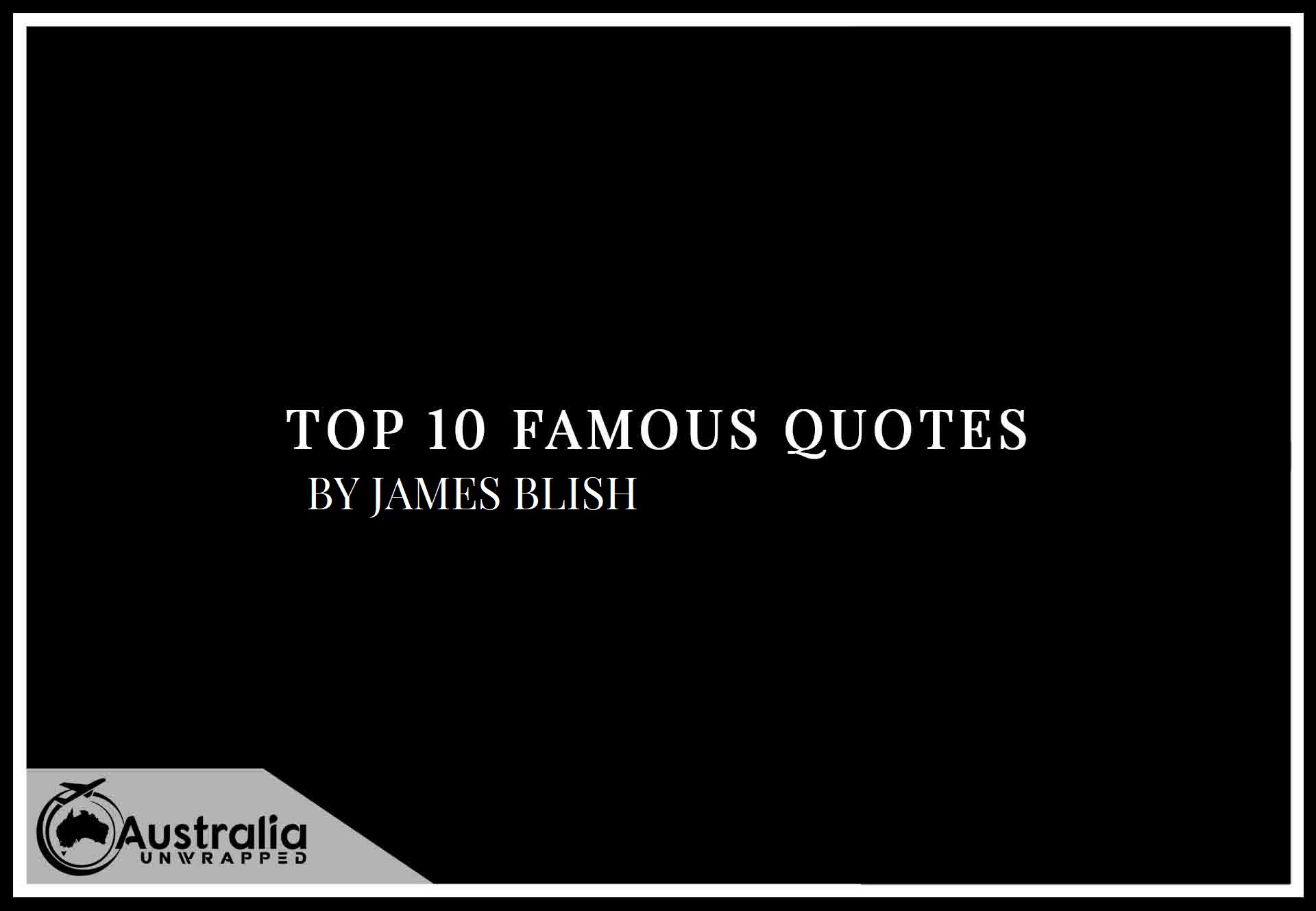 Love reading? Then it’s likely you will love a good quote from your favourite author. This article covers James Blish’s Top 10 Popular and Famous Quotes that we at Australia Unwrapped have collected from some of his greatest works. James Blish quotes to remember and here you will find 10 of the best. A memorable quote can stay with you and can be used along your journey. Choosing James Blish’s top 10 quotes is not easy, but here they are:

“The omelette tasted like flannel.”
― James Blish, A Case of Conscience

“True, most of the people he had known personally were pleasant people who were far from short either of money or good will — people who would not hesitate to help someone in trouble if they could, or thought they could. By the same token, most of the fiction he had read had been about fantastically selfish, unwashed people without a grain of human kindness even toward themselves, who seemed to be distracted from prolonged acts of suicide only to strike out at the people around them. Between the two, he struck a rough sort of balance.”
― James Blish, Welcome to Mars

“The boundary between the real and the unreal had been let down in Foote’s mind, and between the comings and goings of the cloud-shadows and the dark errands of the ghosts there was no longer any way of making a selection. He had entered the cobwebby borderland between the human and the animal, where nothing is ever more than half true, and only as much as half true for the moment.

(“There Shall Be No Darkness”)”
― james blish, Zacherley’s Vulture Stew

“There is wanting the unobtainable, and there is the obtaining of desire, and the greatest of these is the wanting, especially since the object of desire usually exists only in some alternate reality, to be mocked by actuality.”
― James Blish, Cities in Flight

“I for one refuse to believe that an enterprise so well conceived, so scrupulously produced, and so widely loved can stay boneyarded for long.
And I have 1,898 letters from people who don’t believe it either.”
― James Blish, Spock Must Die!

“[H]er spare strange beauty was not that of a woman, nor even of a statue, but that of the Platonic absolute of which all beauty is but a shadow in a cave, cast by the Fire beyond fire.”
― James Blish, Doctor Mirabilis

“[T]he end cannot justify the means; but if there are no other means, and the end is necessary…”
― James Blish, Cities in Flight

“Let us unlearn everything we know only by rote, go back to the beginning, learn all over again.”
― James Blish, The Thing in the Attic

“I’ve spoken the truth. The truth can’t be unsaid.”
― James Blish, The Thing in the Attic

10 quotes by James Blish there you go! It’s never an easy task picking the best quotations from great writers, so please if you disagree or have more to add, please comment and share your opinions. My 10 greatest James Blish quotes will likely be different from yours; however, that’s the best thing about them, each quote can mean something different to each person. So don’t wait, comment and shares your best James Blish Quote.

“I will be the first. As of tonight, I renounce my citizenship in the United Nations, and my allegiance to the Shelter state. From now on I will be a citizen–a citizen of no country but that bounded by the limits of my own mind. I do not know what those limits are, and I may never find out, but I shall devote my life to searching for them, in whatever manner seems good to me, and in no other manner whatsoever.
You must do the same. Tear up your registration cards. If you are asked your serial number, tell them you never had one. Never fill in another form. Stay above ground when the siren sounds. Stake out plots; grow crops; abandon the corridors. Do not commit any violence; simply refuse to obey. Nobody has the. right to compel you, as non-citizens. Passivity is the key. Renounce, resist, deny!”

― James Blish, A Case of Conscience

15 Best Quotes About Hope And Faith