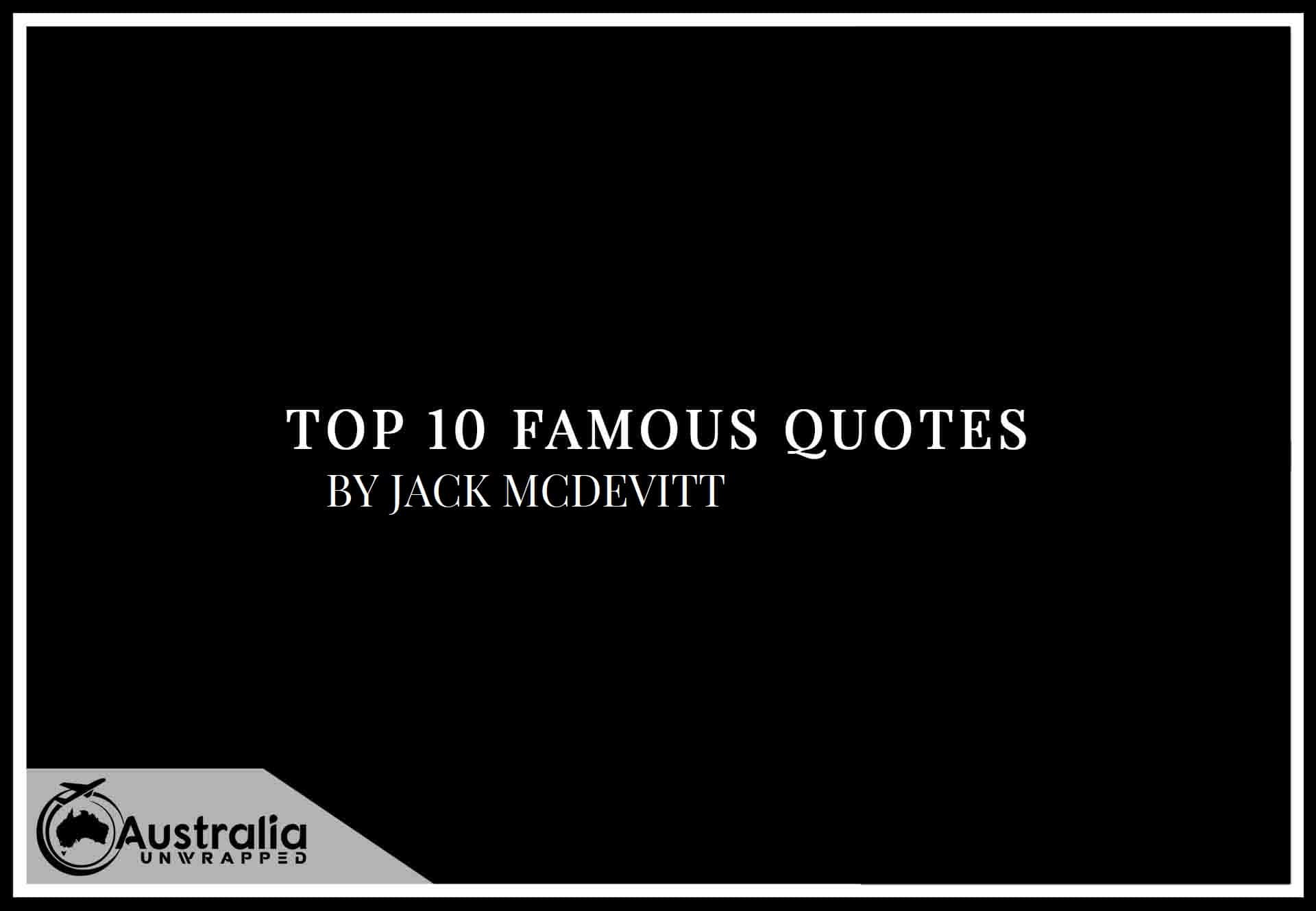 Love reading? Then it’s likely you will love a good quote from your favourite author. This article covers Jack McDevitt’s Top 10 Popular and Famous Quotes that we at Australia Unwrapped have collected from some of his greatest works. Jack McDevitt quotes to remember and here you will find 10 of the best. A memorable quote can stay with you and can be used along your journey. Choosing Jack McDevitt’s top 10 quotes is not easy, but here they are:

“We live along the shores of night,
At the edge of the eternal sea.”
― Jack McDevitt, Infinity Beach

“Intelligence and compassion are the heart of what it means to be human. Help others where you can. That is clear enough. But a Creator may well want us to open our eyes, as well. If there is a judgment, God may not be particularly interested in how many hymns we sang or what prayers we memorized. I suspect He may instead look at us and say, “I gave you a brain, and you never used it. I gave you the stars, and you never looked.” —Marcia Tolbert, Centauri Days, 3111 C.E.”
― Jack McDevitt, Firebird

“Human existence is girt round with mystery: the narrow region of our experience is a small island in the midst of a boundless sea. To add to the mystery, the domain of our earthly existence is not only an island in infinite space, but also in infinite time. The past and the future are alike shrouded from us: we neither know the origin of anything which is, nor its final destination.”
― Jack McDevitt, Seeker

“The real problem has to do with the inability by people to admit that a position they’ve held a long time might be wrong. That’s all. Not that it is. Just that it might be. I don’t know why it is, but we tend to fall in love with things we believe, Threaten them, and you threaten us.”
― Jack McDevitt, Firebird

“Tides are like politics. They come and go with a great deal of fuss and noise, but inevitably they leave the beach just as they found it. On those few occasions when major change does occur, it is rarely a good news.”
― Jack McDevitt, Deepsix

“Superman and Batman got their start, we think, during the twenty-fourth century. Except for a brief period during the Dark Age, they’ve never gone away.”
― Jack McDevitt, Coming Home

“Truth, beaten down, may well rise again. But there’s a reason it gets beaten down. Usually we don’t like it very much.”
― Jack McDevitt, Odyssey

“Drink deep the cup of life; take it’s dark wine into your soul. For it passes round the table only once.”
― Jack McDevitt, Seeker

“Show me what a people admire, and I will tell you everything about them that matters.”
― Jack McDevitt, The Engines of God

“We could never know who we truly were until we heard the whispers of the stars.”
― Jack McDevitt, Infinity Beach

“I don’t think I’d have wanted to be around during a dark age. It’s odd, though. They had interstellar flight. And data retrieval and everything.” Gabe nodded. “None of it matters if you have an unstable society and tin-pot dictators. They had several hundred years of economic collapse. Widespread poverty. A few people at the top had all the money and influence. They had terrible overpopulation, struggles over water and resources. Civil wars. And widespread illiteracy.” The thirty-second to the thirty-ninth century. “It’s a wonder we survived.”