Is The World Economy Bankrupt? Can The Debt be Repaid? 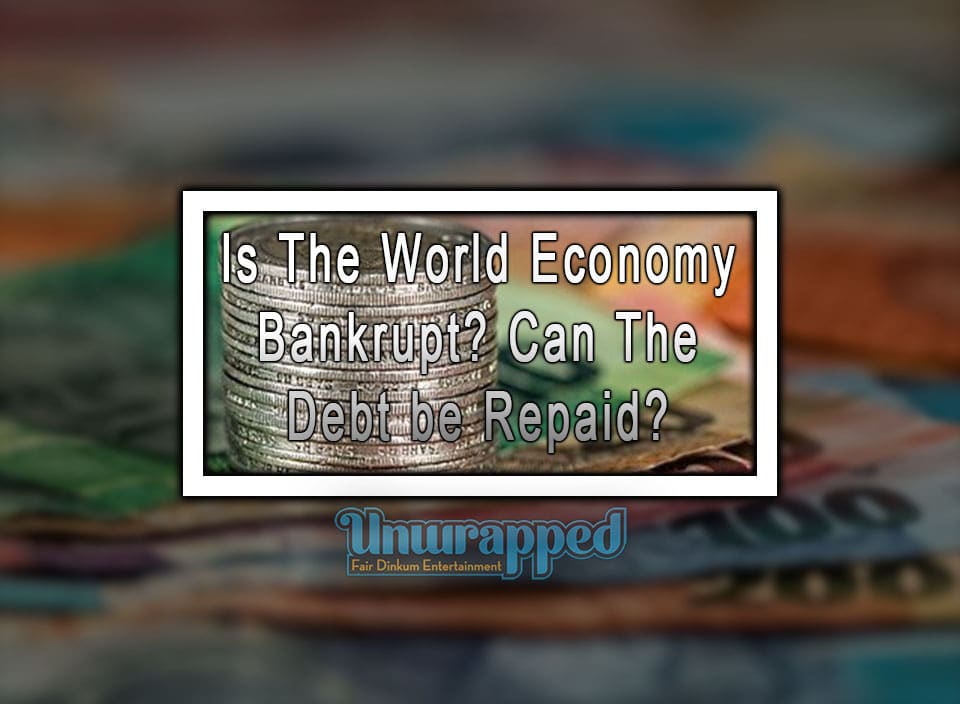 Is The World Economy Running Out of Cash? Can it be Repaired?

It has now been almost over a year since the pandemic struck the world. The last year has been very turbulent. We have seen multiple lockdowns, millions have passed away and millions have been left unemployed. Different countries have dealt with this crisis in different ways, while many have been successful in keeping the extent of damage limited, many have not been so lucky.

Apart from all of this, one of the major blows of this pandemic has been to the economy. We have got the vaccines now and the immunization drive will probably allow the economies to open up but the extent of damage done in the past one year has been too great.

Also See: How To Achieve Financial Freedom Through Property Investment

Global Impact of the Pandemic

These were and are still the worst affected sectors. Millions of people working in these sectors have been unemployed or furloughed. Businesses like Dabenhams have closed down, causing thousands of workers to become unemployed globally.

Certain sectors on the other hand such as

Have seen a boom in their business activity, as people and businesses were forced to adapt to the changing circumstances. Pandemic caused billions of dollars to flow into bio tech, to prepare vaccines and drugs not only to treat the Covid-19 virus but also to research on any future outbreaks.

Another impact of the pandemic has been upon economies. Almost every global economy had its short terms plans derailed due to the pandemic. Japan could not host the 2020 Olympics which would have brought in a lot of revenue and business activity. China may not be able to host the paralympics this year.

Similarly economies have had to divert funding from many other sectors to Covid-19 relief efforts, in order to cushion the economic impact for the lower income classes. After a year of the pandemic, economic experts are now beginning to see that the pandemic has not only increased the disparity of income but it has increased poverty all over the globe.

The above image shows how countries are struggling with increased unemployment due to the pandemic. Austria, which is the 6th wealthiest nation in Europe, has got food banks supporting those who have become homeless and unemployed due to the pandemic. Spain is one of the worst hit economies in Europe, with food banks sustaining hundreds and thousands of people. The USA similarly has got food banks helping struggling families get through the crisis by at least having food on their table.

This is the real damage to the economy which is not going to be repaired any time soon. Why? Because as mentioned above, the economies are going through a transformative phase. Businesses are transforming, they are adopting automation and technology to deal with the pandemic and cut costs and as a result the unemployment that we are seeing is partly structural and partly short term. Short term unemployment will go away as economies open but structural unemployment will stay. So what is the plan that countries have to deal with the long term effects of unemployment? Too early to say right now.

Last year in March, the global markets crashed and around 23rd March, there came a time when the global economy was going into a credit crunch that could have had the potential to bring the whole system crashing down.

At that point, central banks kicked into action to save the crumbling economy. It must be remembered that last year in March, central banks were already scrambling to find options to sustain the economy but as markets continued to crash, banks soon ran out of everything that they had used in 2008 to control the crisis.

As a result, the final option left for banks like FED and ECB and basically central banks in every country was to directly intervene in the economies and lend funds to the banks and businesses. Now in some countries like USA, the central banks directly carried out high street lending whereas some countries that initially did not get as badly hit, used other methods that were more reminiscent of the 2008 crisis. In any case, helicopter money or quantitative easing resulted in trillions of dollars worth of debt getting injected into the market.

Since March last year, the level of debt has been swelling in almost every country.

The table above shows countries by percentage of global debt. It can be seen that USA has 31% of global debt followed by Japan at 17%, which is roughly half of that of USA, then comes China at 9.8%.

Australia is ranked 14 when it comes to debt level, the debt to GDP ratio of Australia is around 41.4% which is not as high as many of the other economies and it has 0.8% of the global debt. Which again is not much.

Can this debt be repaid? In theory, yes. But in reality the level of debt since 2020 has sky rocketed and in order to repay this debt the governments will have to work on their fiscal policies and increase the tax rates, which seems impossible given the global financial situation right now. Economies have got very little room to increase taxes before their local populations erupt in protests, as we have seen recently in France, Italy and other European states.

So, if the global debts cannot be repaid, then is the global economy heading for a collapse? Once again it is too early to draw this conclusion. Perhaps no. Why? Because a major portion of the debt is issued by central banks to their governments and this is a situation that can drag on for a long time. Central banks can keep on lending but the issue is inflation. You can only pump a certain amount of money into the economy before every economic principal goes out of the window and you create a situation similar to that of the Great Depression!

This is a conversation that has been happening for a while and “Great Reset” is a concept that is being discussed as an alternative to global economies being bankrupt. Some call it a conspiracy but at this stage, it seems too early to say anything. The idea of a great reset however is interesting. If the global economy becomes too leveraged on debt and a collapse seems imminent, then in such a situation a great reset may be a very viable option to avoid the negative consequences of a global crash.

Australia Unwrapped provides only general and not personalised financial advice and in no way has taken your circumstances into account. Investments go up and down; any questions, talk to a financial advisor. This blog is opinion only, and in no way should investment decisions be based on this information.

Stay Connected
41,936FansLike
5,684FollowersFollow
815FollowersFollow
Previous article
How To Start A Motivational Speaking Business In 2023
Next article
Property Investment Versus Investing In The Stock Market

Best Way to Send Money to the USA from Australia

Best Cryptocurrency Stocks to Invest in This Year

How to Make Money Doing Display Advertising Gigs on Fiverr