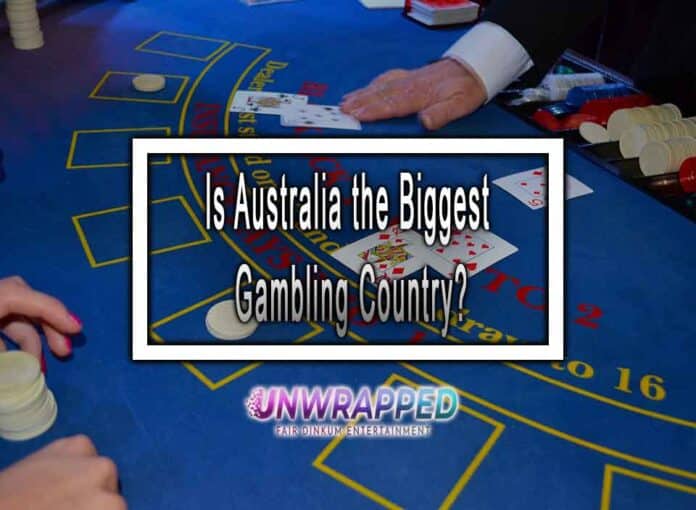 When discussing which countries are the biggest gamblers, Las Vegas, is always included in the conversation as its fame and glitz have catapulted its status in popular media. It is because of Las Vegas that many people tend to classify the US as the biggest gambling country on Earth. However, it is difficult, if not outright impossible, for anyone well-informed on the subject matter to disregard Australia as not merely a contender but as the true largest gambling country on Earth. If you are interested in experiencing how it feels like to play in Australian casinos, feel free to try the new online casinos Australia has.

The percentage of people in Australia involved in gambling-related activities is staggeringly high compared to other countries such as the USA. These gambling activities include lottery, various different sorts of wagering activities or online gambling. But the main question remains: can Australia be considered the biggest gambling country in the world? To answer this question, we are going deep down to check the state of the gambling scene in Australia. Only once we understand the full impact of the gambling industry in Australia this question might be answered appropriately, whilst also learning about Australia’s history with gambling and how it is regulated.

Australia is regarded as one of the countries with the largest rate of active gamblers worldwide and is considered the largest on the list. In a 2017 article titled Countries that Gamble The Most, Australia is listed amongst other countries such as Ireland, Singapore, Finland and Canada. These countries are considered to be some of the largest gamblers worldwide. However, Australia stands out amongst them for being considered the country with the largest amount of gaming losses per adult in the world, amounting to $1,288/adult. This is followed very closely by Singapore, with losses up to $1,174/adult and then by Ireland, losing approximately $588/adult.

The way gambling is regulated in Australia contains many grey areas and loopholes. This makes understanding the laws that go behind the management of gambling games somewhat confusing. However, this is understandable since gambling is prevalent in this country. Since Australia is divided into eight separate territories, it is up to each jurisdiction to regulate gambling activities within its borders. However, sports betting is considered legal throughout the country, and you can bet on any sporting event you like in Australia.

Gambling is not only considered a prevalent hobby in Australia but has become such a commonplace pastime that its central bank was forced to increase interest rates because of gambling. Whenever gambling is stated, it refers to those that would consider traditional gambling games such as poker, slot machines, lottery, and sports betting. But also to more contemporary gambling activities such as online gaming or even esports.

History of Gambling in Australia

Being a relatively young country, the history of gambling in Australia is not particularly as long or complex as in other more ancient civilisations like China or Greece. However, if we are to understand the current role of gambling in Australia, first, we need to learn and understand its place and role in Australian history. The first gambling events recorded in Australian history were horse racing at Hyde Park, Sydney, in 1810. Nevertheless, gambling games can be traced back to 1788, when convicts would play the two-up game. This is a game with two coins in which the players had to guess on which side they would land.

The next instance of recorded gambling activity was a lottery event that took place in Sydney in 1880. It was organised by a private company called Tattersall’s. This event marked the beginning of the lottery system in Australia. Due to this, the lottery was considered an illegal event that forced these sweepstakes to move from one state to another after being shut down by the authorities. However, the government would eventually organise charitable lotteries in 1970 to raise funds for WWI veterans and for the healthcare system.

Although, it would not be until the 1950s that more sophisticated gambling activities would be introduced in modern Australia. This was thanks to the introduction of the first slot machines. Their arrival to the market would be a huge success for the companies involved, as they could be found at a wide variety of pubs and clubs across the country.

The opening of the first legalised casinos in Australia occurred in 1973, after many attempts throughout the years to attain a legal casino licence. The opening of The Wrest Point Hotel Casino in Tasmania was a national event as casinos were officially illegal for being disruptive to the country’s moral fibre and being difficult for the government to control.

As previously stated, online gambling in Australia is currently in a somewhat grey area that sometimes makes it difficult to tell where its legality begins. However, this is what we are here to find out. If one followed the Interactive Gambling Act of 2001, online gambling in Australia would be considered illegal. Nonetheless, it is actually applied in the country because it is legal for players to use offshore gambling sites in Australia. It is illegal to operate an online casino but legal to play one as long as you are 18 years old.

Be that as it may, certain online casinos are more legal than others, depending on your state. The best way to ensure the casino is legitimate is to check which casinos are most recommended in your region. Some aspects to take into account when selecting the best Australian sports online betting games are that these must be accessible, allow you to deposit money comfortably, be mobile friendly, have available playing bonuses and be user friendly.

You are exposing yourself to risks by not choosing reliable and trustworthy online gambling games. These could include: the stealing of personal information, rigging of online games, inability to access the most basic of information, conditions to obtain bonuses are highly restrictive and money withdrawal being considerably more difficult than it should be.

Tips For Saving Money in Australia

5 Crypto Tips for all Australian Investors

Tips to Save on Business Electricity Bills

Financing a New Business – What You Need to Know

Tips For Saving Money in Australia

5 Crypto Tips for all Australian Investors

Tips to Save on Business Electricity Bills

How to Make Money Doing Public Relations Gigs on Fiverr