International Human Solidarity Day 2022 Theme and How to Help 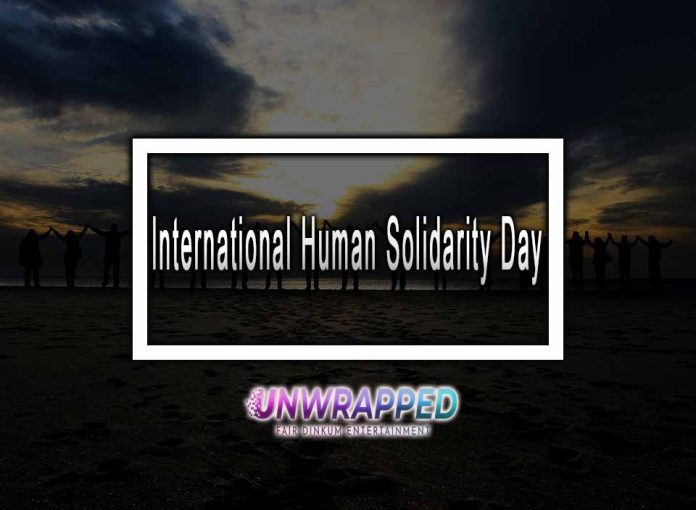 International Human Solidarity Day is celebrated every year on December 20. International Human Solidarity Day (IHSD) is the United Nations and its member nations’ annual unification day. This organization’s primary mission is to acknowledge the universal value of solidarity by educating member states about global poverty reduction objectives and activities and developing and exchanging poverty reduction solutions among independent nations worldwide.

Do you know? Global poverty eradication is a top priority for the World Solidarity Fund and the United Nations Development Programme, supporting IHSD. As long as you’re doing something kind for others, you may join in the fun and commemorate this special day. Instead, the Sustainable Development Goals serve as a call to action for governments to address issues like poverty and inequality.

The concept of solidarity helps us to understand how different generations are related, helping each other and depend on each other in our daily lives. Structural cohesion: This refers to how factors such as geographic distance can limit or enhance interactions between family members.

The United Nations General Assembly established the day because it believes that promoting a culture of cooperation and generosity is essential to overcoming poverty. It pushed the notion of solidarity as crucial in the battle against poverty and the engagement of all critical stakeholders via initiatives such as the formation of the World Solidarity Fund and the declaration of International Human Solidarity Day.

The UN says that fostering international solidarity is essential in light of globalization and rising inequality. As a result, it is critical to cultivate a spirit of generosity and develop a sense of community to eradicate poverty. Throughout the year, the theme of solidarity in the battle against poverty and the engagement of all essential stakeholders is promoted through the annual Day of Solidarity. In addition, peace, human rights, and social and economic progress are all on the agenda for the day. It became clear to the United Nations organization that solidarity means working together to find solutions to worldwide issues that have a financial, social, cultural, or humanitarian nature.

The idea of solidarity has always guided the United Nations’ work. When the United Nations was formed, people and nations from around the world came together to promote peace and social growth. A fundamental tenet of the organization’s founding was that it was formed on an essential basis of unity and harmony among its members, embodied in the notion of collective security. As part of its “cooperation in solving worldwide economic, social, cultural, or humanitarian issues,” the organization focuses on the spirit of solidarity.

Promotional materials for International Human Solidarity Day use the UN logo. A globe projected from the North Pole serves as the organization’s logo. Four concentric circles denote four degrees of latitude. It shows all of Earth’s continents except Antarctica. Symbols of peace are depicted in the form of olive branches around the video projection. The UN flag’s logo is white on a blue background, but the emblem is commonly blue.

What is the importance of the International Human Solidarity Day

The International Human Solidarity Day is celebrated to raise awareness regarding unity in diversity.

World Down Syndrome Day 2023 Theme and How to Participate