International Day of Tolerance 2022 Theme and How to Celebrate 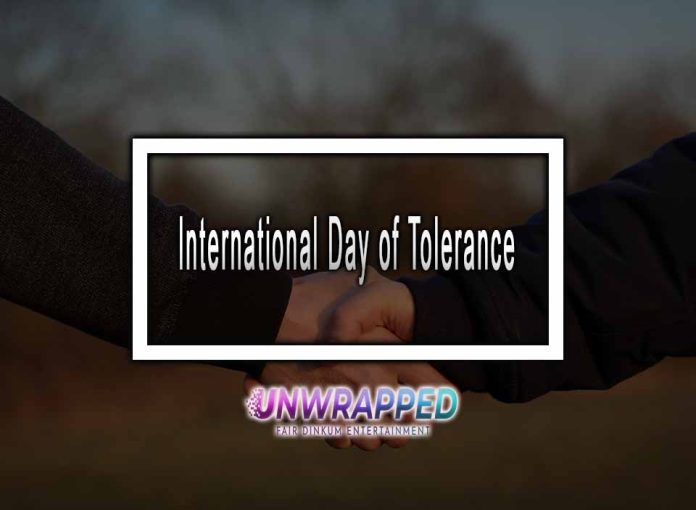 International Day of Tolerance is celebrated every year on 16th November. The International Day of Tolerance is a perfect moment to reflect on a period when you had a different point of view than one of your friends. If you’ve ever had to learn about another culture when was the last time you did so? We think it wasn’t too long ago. Take a look at the day that honours open-mindedness and listening. Understanding the difference between tolerance and intolerance and appreciating the uniqueness of each culture

Having a conversation with someone who has a different perspective can lead to a greater understanding of each other. In a world without tolerance, life would be a lot less enjoyable. However, many believe that such a world should never exist and that everyone has the freedom to express themselves, practise their faith, and follow their conscience without fear of bias or contempt. Furthermore, it stresses that a person’s ethnic or religious past has no bearing on their aptitude for tolerance and friendship.

To promote tolerance in schools and the broader public, the United Nations General Assembly launched this initiative. Do you know? In 1995, the United Nations established a Year of Tolerance. To define and make everyone aware of tolerance, UNESCO drafted the Declaration of Principles on Tolerance in 1995. 16th November 1995 was the day on which this incident occurred. The International Day for Tolerance is observed annually on 16th November to commemorate the anniversary of that Declaration and promote tolerance and raise awareness of any intolerance that may still exist in the world today.

Even though we should practise tolerance every day, it is nice to be reminded of its importance once in a while. As part of its efforts to promote tolerance and non-violence in disciplines including science, culture, and the arts, the United Nations Educational, Scientific, and Cultural Organization (UNESCO) has established an award. The International Day for Tolerance and the UNESCO-Madanjeet Singh Prize acknowledge that tolerance is a fundamental human right.

The United Nations defines tolerance as respect, appreciation, and acceptance of the world’s cultures and how we are human. In addition to people, communities, and even countries. Thus, this idea is based on the statement that human beings have the right to live in peace. The International Day for Tolerance promotes the idea that eliminating intolerance among the human population may be accomplished largely via education. Today, we are urged to educate ourselves and learn how to practise unity among ethnic, socioeconomic, and cultural groups.

Reading about various cultures and ethnicities is a great way to learn about your intolerances and learn about other people’s intolerances in general. Make yourself aware of intolerance before you praise tolerance. It’s a terrific way to broaden your viewpoint and see the world through someone else’s eyes. Only through listening to people who have been victimised by intolerance can we learn more about tolerance and intolerance. Participating in the International Day of Tolerance is the most acceptable way to show your support. Being out there and getting engaged will only help you improve, whether it’s a candlelight vigil for victims of prejudice or a lecture by an accomplished activist or thought leader.

Which Country has high crime rates among youngsters?