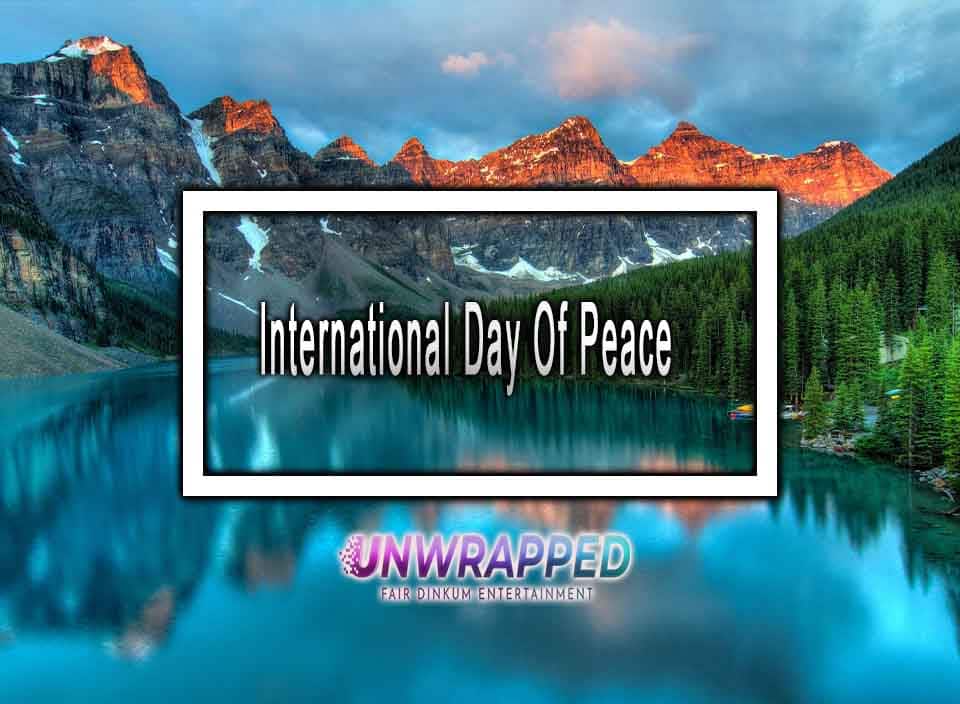 Many governments, political parties, military organizations, and individuals commemorate the day, first observed in 1981. The International Day of Peace (“Peace Day”) is observed around the world each year on 21 September. Established in 1981 by a unanimous United Nations resolution, Peace Day provides a globally shared date for all humanity to commit to Peace above all differences and to contribute to building a Culture of Peace. Do you know? Peace Bell ringing to mark the beginning of the day is held at United Nations Headquarters (in New York City). Inscribed on the side of the bell is the phrase “Long live total global peace,” which was a gift from the Association of Japan as “a reminder of the human cost of conflict.”

United Nations General Assembly proclaimed September 3, 1981, as the International Day of Peace. It was the first day of the General Assembly’s annual session. At its core, today’s celebrations aimed to bolster global peace efforts. On September 21, 2001, two decades after it was first established, the assembly changed this day of remembrance to be honoured every year. Peace is possible. Throughout history, most societies have lived in peace most of the time. Today, we are much less likely to die in war than our parents or grandparents. Since the establishment of the United Nations and the creation of the Charter of the United Nations, governments are obligated not to use force against others unless they are acting in self-defence or have been authorized by the UN Security Council to proceed.For the first time since 2002, September 21 is also a day for organizations engaged in fighting to observe a global cease-fire and refrain from violence for 24 hours.

You can achieve peace. For the most part, most cultures have coexisted peacefully throughout history. Compared to our parents’ and grandparents’ generation, we face far less danger of dying in combat now. Unless they are acting in self-defence or have been permitted by the UN Security Council, nations have been bound by the United Nations Charter to refrain from using force against others. Today, we turn to people who have been peacemakers and peacekeepers to understand what we can each do to make the world a more peaceful place. Life is better in a world where peace exists.

The UN established the International Day of Peace to raise the bar on peace. It is a day dedicated to non-violence and a 24-hour cease-fire. Today, more than ever, promoting peace and tolerance for acceptance across racial, ethnic, and geographical boundaries is essential. People & organizations from all over the world engage in and organize events based on a common subject.

The message of peace is spread through various activities, from small gatherings in homes to enormous communities at fairs and festivals. It is the role of schools to organize art exhibitions and courses for students to learn about conflict and wars. To learn about wars in history so that the mistakes of the past are avoided in the future. In addition, individuals participate in actions such as planting trees or releasing caged animals to help spread the message of peace and love on a smaller scale.

Non-governmental organization Pathways to Peace launched the Minute of Silence in 1984. Each time zone observes a “Peace Wave” at noon, travelling around the globe. Those interested in contributing to creating a more peaceful world are encouraged to do so. You can bring people together by inviting your neighbours and friends to bring a dish from a different country or culture to the potluck.

Sharing a meal is one of the oldest but most effective methods to bring calm into your life. Interfaith and multicultural dialogues can enrich the evening. Let your family’s peacemaking efforts begin at home. Teaching your children about conflict resolution, peaceful communication, consensus-building, and the option of non-violence is a great potential way to promote peace in the world.

What is the Internation Day of Peace 2022 Theme?

The Internation Day of Peace 2022 Theme is “Service Before Self.”