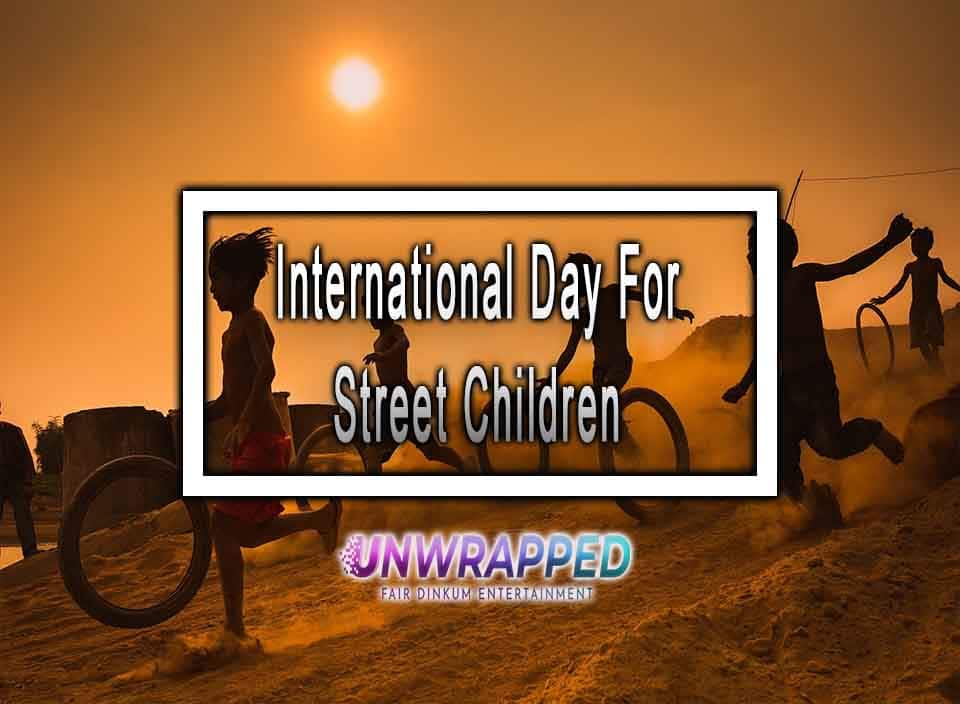 This year, they are also recognizing the dedication and work of those working on the streets to help the children. International Day for Street Children has been observed worldwide since 2012 to recognize the humanity, dignity, and tenacity of street children in the face of unimaginable hardships.

Street children end up on the street due to a variety of reasons. One of the most prevalent causes is that they live in a country plagued by war and strife. Children in this scenario have either been separated from their families or have lost relatives. Some youngsters choose to leave home because family members are abusing them. Other children live on the streets because they have been abandoned by their families, suffer from mental illness, or are compelled to engage in criminal activities. Regardless of the circumstances, street children are frequently denied access to education, health care, and other fundamental human rights.

The 2021 Celebration CSC Theme is “Assistance to essential services”, an issue that has grown increasingly serious during the COVID-19 epidemic, as street-connected children and homeless kids worldwide struggle to access services that they are often refused. Many rely on drop-in centers and mobile clinics, and since they are not registered, they cannot receive emergency assistance like food packages. It may mean returning to an abusive environment for those who have houses.

Street children are not just among the world’s most disadvantaged children, lacking access to essential services such as education and healthcare and being disproportionately targeted by violence. As the world begins to recover from the epidemic, they are even more likely to be left out. The origins of this phenomenon are numerous, but they are frequently linked to domestic, economic, or societal disruption.

Cultural influences may cause children to end up on the streets. For example, some children in the Congo and Uganda are forced to leave their homes because they are suspected to be witches that bring bad luck. In addition, young girls in Afghanistan may be compelled to leave their homes if they are accused of “honor crimes” that embarrass their families and cultural norms. It might include opposing an arranged marriage or even being raped or sexually assaulted if this is deemed adultery in their culture.

While some governments have put initiatives to help street children, the most common approach is to place them in orphanages, juvenile homes, or penal facilities. However, various governments have made efforts to assist or collaborate with non-governmental groups. For example, the government has attempted to develop programmes to place these youngsters in state-run homes in Colombia. Still, these attempts have mostly failed, and street children have become a target of social cleansing by the National Police, who suspect them of being drug users and criminals.

The Supported Accommodation Assistance Program is Australia’s significant response to homelessness (SAAP). However, the program’s effectiveness is limited. For example, 1 out of every 2 children that seek bed at SAAP is turned away due to overcrowding. When access is limited during the epidemic, governments must guarantee that street-connected children access essential services like education, child protection, and healthcare.

Governments must include them in all schemes and emergency financing implemented in their nation, including particular facilities for street children such as handwashing stations and food distribution programs. During limitations, governments must also enable social workers to conduct street outreach work to ensure that children access crucial assistance and information from a trusted adult. As the world recovers from the epidemic, governments must prioritize investment in vital programs for street children. Governments must provide easy-to-access and comprehend information and guidance for street-connected children and homeless kids, especially those with low or no reading skills.

Various Tactics are used to address the needs and rights of street children and non-governmental groups. For example, several youth refuges were founded in Australia throughout the mid-1970s. These refugees, which local juvenile workers established to provide crisis housing, eventually received support from the Australian government. Caretakers Cottage, Young People’s Refuge, and Taldemunde are only a few of the early refuges in New South Wales. After its establishment, the Department of Family & Community Services supports these refugees.

When Was International Day For Street Children Established?

The International Day For Street Children was established on 12th April 2011.

More Madness: Unethical Life Hacks That Will Blow Your Mind