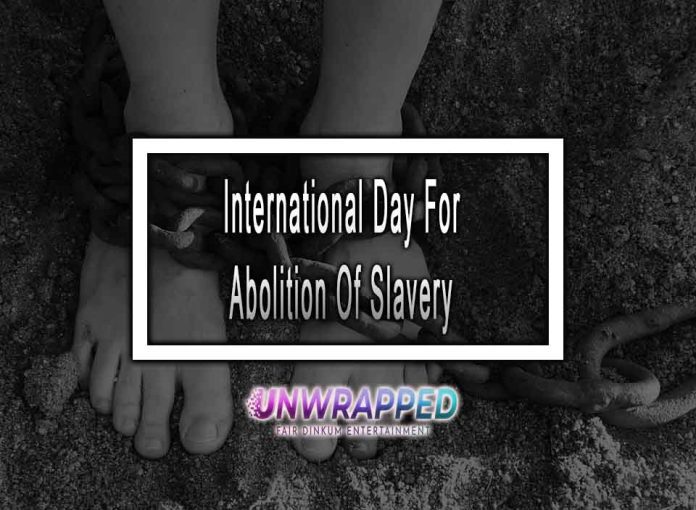 International Day For Abolition Of Slavery

International Day For Abolition Of Slavery is celebrated every year on 2 December. So it was when the General Assembly adopted the United Nations Convention against Traffic in Persons and Exploitation of Others (resolution 317(IV) of 2 December 1949) as part of the International Day to End slavery. Likewise, the International Day is commemorated when the United Nations General Assembly adopted the first Convention to combat human trafficking. Forcible child labour, forced marriage, and the recruitment of minors into armed combat are among the most heinous forms of modern slavery that will be addressed today.

When the United Nations Convention to Prevent Traffic in Persons and Exploitation of Others was adopted, it became known as the International Day to End Slavery. The General Assembly’s resolution 317(IV) of 2 December 1949 attempts to eradicate current forms of slavery that are rooted in the past. Slavery’s history is a constant reminder of the horrors and cruelty of slavery. The practice of slavery was widespread throughout the world and was used to enslave large numbers of people. Trans-Atlantic slavery is the most recent example of modern-day slavery. At this time, Africans were brought to the United States and made to labour in plantations owned by European imperialists.

The Atlantic slave trade began in the 15th century, when Portugal and later other European kingdoms were finally able to expand overseas and reach Africa. The Portuguese first started kidnapping people from the west coast of Africa and sending them back to Europe.

Human trafficking, child labour, and forced prostitution have evolved as new kinds of slavery after slavery was abolished. The United Nations has a strong interest in stopping this. According to UN human rights authorities, traditional beliefs and rituals perpetuate slavery. Slavery is a long-standing effect of discrimination against society’s most vulnerable groups, such as those considered low caste, a tribal minority, and indigenous peoples. On this day, we should remember how the current period of globalisation has allowed the expansion of informal economies and widening economic gaps between countries, resulting in an increase in international labour and commodity movements that have led to a rise in worldwide human trafficking.

How many people face modern-day slavery?

Solar Energy in Australia – What is Renewable Energy? – Solar...

International Human Solidarity Day 2022 Theme and How to Help