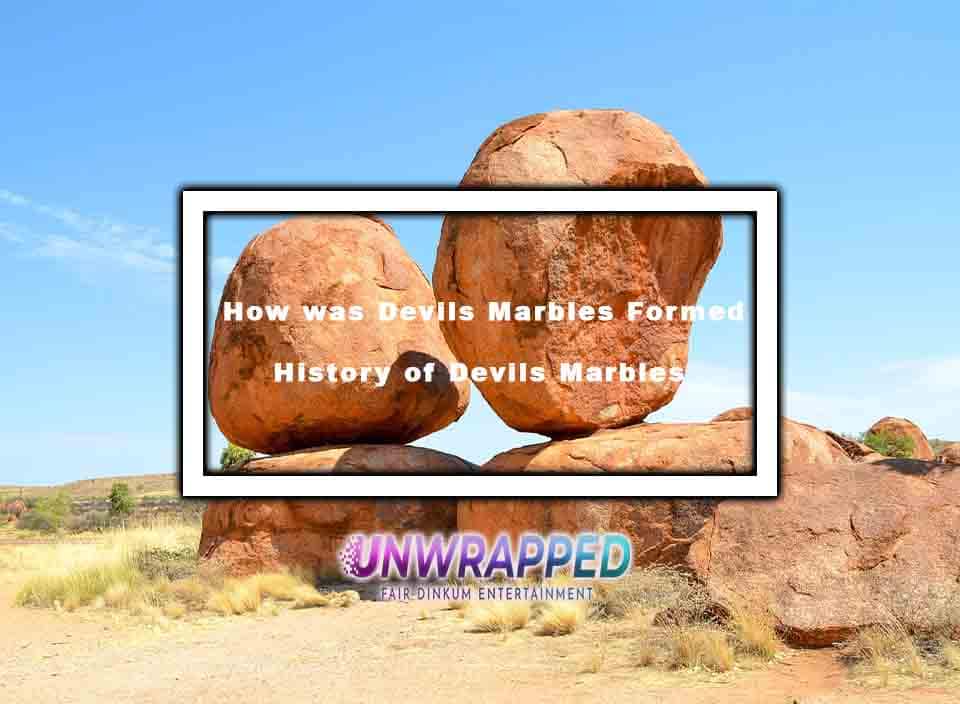 “This is the Devil’s country; he’s even emptied his bag of marbles around the place !”

Devil’s country? Sure this man’s talking about some strange place with devils and marbles. Well, if you think so, you’re in for a shock. The Devil’s country referred here, is our very own Australia! and his marbles are what makes Australia even more popular than it already is (quite huge, eh ?).

Located about 65 miles south of Tennant Creek and 244 miles north of Alice Springs, these boulders are one of Australia’s most famous natural possessions. Besides holding great popularity among visitors, it is a religiously significant place for the native aborigines.

Native to the Alyawarre people, other aboriginal groups (Kaytetye, Warlpiri etc.) also hold the place extremely sacred. The formation of Devil’s Marbles commenced millions of years ago when chemical & mechanical weathering due to certain natural agents resulted in the erosion of granite and the surrounding sandstone layer. The residual granite on the surface took the shape of boulders, as in present, due to further atmospheric and geological phenomena. Originally named, the Devils Marbles Reserve (1961), the present name was assigned on 6th July 2011.

A stage for the dancing light, Devils Marbles’ true beauty can only be understood as a synthesis of its exploration through different angles. One simply can’t feel the true essence of the place via a one-dimensional tour.

No ! Devils Marbles is too marvellous a wonder to be felt casually. Alike diamonds scattered on a piece of muslin cloth, these boulders, each completely different, are spread throughout the vast and arid desert land. What’s more interesting is the shapes and formations one views, which occur due to natural forces, but seem like the work of an experienced mason.

Precariously balanced formations, exactly cleaved boulders, formations in seemingly impossible angles, Devils Marbles is quite an unbelievable place. To truly get an idea, one has to simply view it! (words can never be enough to describe it). Another beautiful aspect (a visitor must never miss) is the rocks glowing and changing their colours, from pink to bright red, during sunrise and sunset.

It is a heavenly opportunity for us to view and admire the beauty of nature and light. Boulders defying all physical laws, and the ever-changing landscape due to continuing natural erosion deems it mandatory to view, admire, and study Devil’s Marbles as deeply as possible. And guess what? The traditional tales of their origin are equally interesting. Try asking a local. Who knows, you might get lucky, and get to know some of the forbidden ones!

One traditional story relating to the formation of the area states that the Devil’s Marbles are clusters of hair, fallen to the ground while Arrange (Devil) was making a hair-string belt!

The boulders vary in size (50 centimetres – 6 meters across), and have marvellous formations as if created artificially!

Are you a witness to the interesting views of Devils Marbles? Tempted to show-off? Then comment below and share your snaps and stories here.

What happened to the Devils Marbles after it was formed?

Also See: Is Uluru the Biggest Rock in the World – Ayers Rock