7 Definitive Ways To Tell If A Guy Likes You 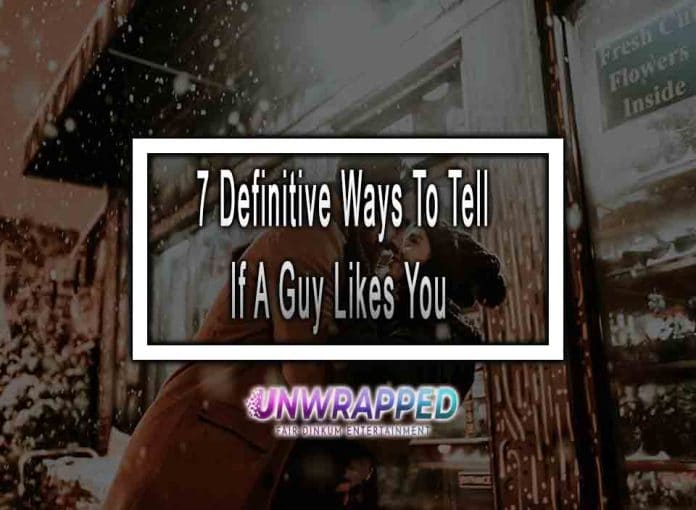 How to Tell If a Guy Likes You

Dating is the worst. You may believe you have a good understanding of a guy’s genuine sentiments toward you, but they do something harmful to you and leave you in the dust. That’s why learning to determine whether a guy likes you might help you read between the lines and figure out where you and he stand. However, figuring out how to tell if a male likes you isn’t always as straightforward as we’d like. Whether you want to manoeuvre the dating world with elegance or find real love, understanding how to recognise the subtle indicators a guy likes you is essential. This post will acknowledge everything regarding definitive ways to tell if a guy likes you.

He Wants To Find Our If You Have A Boyfriend

If he asks you explicitly, “Do you have a boyfriend?” he certainly likes you. But that isn’t what I’m referring to. Instead, I’m talking about whether he attempts to figure out if you already have a partner obliquely. It’s unusual for someone to inquire if you have a partner openly. So look out for any mention of his dating status. “Ah, life is duller when you’re single,” he could add, or “I’m single, so I went to the excellent wedding on the weekend by myself.”

He’s disclosing his status because he wants you to disclose yours. For example, if you tell him you went to a party over the weekend, he could wonder if you went by yourself. There will be subtle indicators like these that indicate if he is attempting to determine whether or not you have a partner. If you’re confident that he’s trying, he likes you and sees a future with you.

He’s Looking For Reasons To Touch You.

It is a significant sign that he likes you, especially if he’s a straight shooter. Humans have a bias toward touching things they enjoy. Is he hugging you particularly tight? Or is he softly stroking your arm while talking to you? Is he encircling your shoulder with his arms? Guys who are self-assured and have no qualms about touching women will touch you in any way if they like you. After all, they enjoy you and get a rush from touching you. It’s also a means for them to establish a relationship with you and make you feel at ease.

However, just because a guy isn’t touching you doesn’t imply he doesn’t like you. Some men are simply incapable of touching without appearing sleazy or uncomfortable. They might also be timid. Therefore, it’s also crucial to ensure that he isn’t a touchy-feely person with other people. That might mean he’s at ease with touching others. However, if it appears that he is touching you more than other people, you can bet that he likes you.

He certainly likes you if he contacts you, calls you or sends you a humorous post on Instagram to have a chat with you! He wants your attention in one way or another, and he has no qualms about taking the lead in a conversation. If a guy skips Snapchat in favour of having a conversation with you, he’s likely interested in more than simply your appearance or how he can get you into bed with him.

Although liking your posts and leaving comments on them does not necessarily indicate that a guy is interested in you, Battle advises that you pay attention if he routinely initiates genuine discussions with you on social media. They will not only like and comment on your posts, but they will also share stuff with you and communicate with you in DMs regularly. If he’s often reacting to your IG stories or Snapchats, asking you questions, and generally keeping the conversation going with you, that’s an indication he’s genuinely interested in building a relationship with you.

When chatting to another guy, does he keep a close eye on you? Is he a little enraged about it? If he does, he’s probably jealous, and jealousy is a sure indicator that a guy likes you. Some males may “act” as though they’re fine with it, but the moment you turn around, they’re enraged and thinking whether that person is serious competition. When chatting to another guy, give him a brief peek to see if he can’t seem to quit gazing.

If his gaze is frequently drawn to you, he’s envious and attempting to figure out how the discussion with the other person is going. He certainly likes you and tries to court you if he does that. Jealousy can motivate a man to take action. It might be an excellent tactic to utilise if you want him to approach you, but be careful since if you’re always chatting to other people, he might believe you’re not interested in him.

It would be best if you treated relationships and dating equally. Equal effort is required. Hence when it comes to getting updates, it shouldn’t always be done by a single individual. It’s a positive indication that a guy approaches you and invites you out, suggesting activities you could do together. It’s even better if he does it right after your final date, telling you he wants to see you again. But pay attention to if the connection is fair and if he contributes equally to the effort because if he is, it’s one of the telltale signals he likes you.

He Isn’t Afraid To Discuss The Future.

Another indicator that he likes you is when he isn’t hesitant to discuss the future with you. And I don’t mean he has to imagine a life with you, marriage, children, and everything else. If you give him too much too fast, he could be love-bombing you. But if he’s talking about things the two of you can do together, like excursions he’d like to go on with you or experiences he’d like to have, that’s precisely what you want! It demonstrates that he isn’t just interested in the here and now and in the future development of the two of you.

Stay Connected
47,273FansLike
5,664FollowersFollow
840FollowersFollow
Previous articleHow To Make A Guy Fall In Love With You in 8 Days
Next articleHow Different Cultures Define Our Kinks And Tips How To Explore Yours

6 Key Signs of Flirting Over the Phone