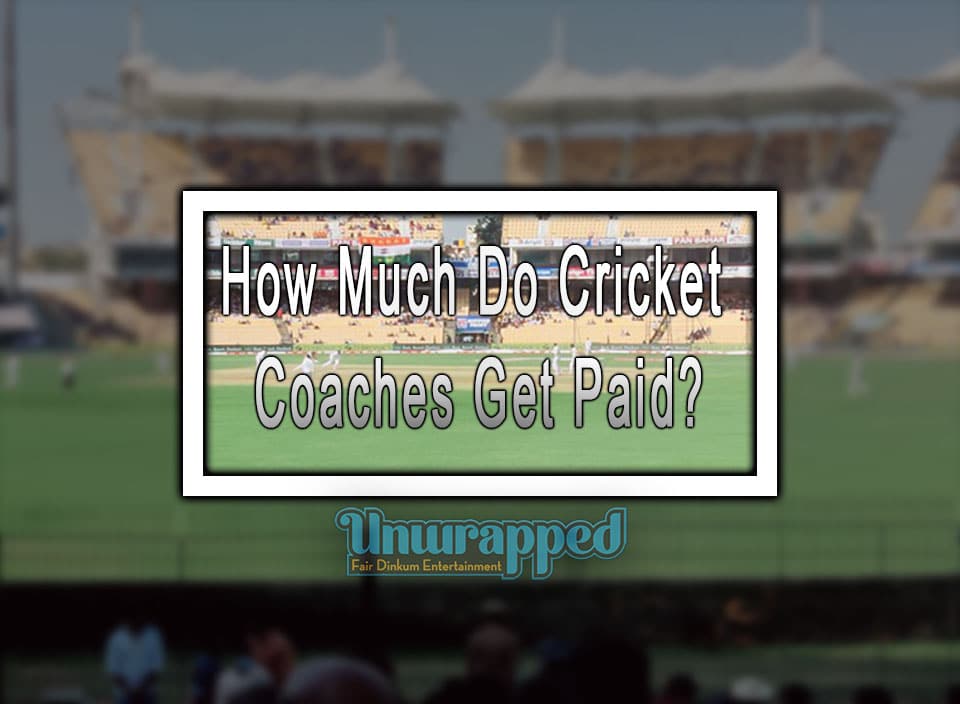 We all look at our beloved cricketers in the field and admire them for their great skills and fitness but of course, we should give credit to the people behind the scenes and on the sidelines of the games, who are their coaches who shaped them into excellent cricketers that we all of us adore today.

But the real question is, how much are these cricket coaches paid for training leagues of amazing cricketers today?

How Much Does a Cricket Coach Usually Make?

This is only the average though. Some major leagues and coaches of pro-athletes are paid higher than the average with an amount of 71, 000 dollars and as for the minor leagues, they go lower as 16, 000 dollars. As you may have noticed, the pay for a cricket coach varies and could totally change in accordance with the skill level, location, and the number of years they have been coaching.

Who are the Top Paid Cricket Coaches in the Present?

In this segment of the article, we will be enumerating one of the world’s top-paid cricket coaches and the reasons behind their well-deserved pays.

The Zimbabwe team, for the first time in the twenty-first century, has failed to enter the 50-overs World Cup. However, this nation of Africa has been preparing itself for the upcoming T20 Qualifiers that is held in the latter half of the year. Despite not qualifying for the World Cup, it will be a good time to redeem themselves under the hands and reins of Zimbibian coach, Lalchand Rajput. He became the coach for the Zimbabwe cricket team at the end of 2018.

He was a former cricketer so he will make a perfect guide for the current team since he has the experience. Rajput became the coach a couple of years ago for the Afghanistan side and the country won a One Day International against the West Indies team. He was also the team manager for India back in 2007 and the Indian team won in the T20 2007.

Floyd Reifer formerly represented the Caribbean nation. Because of him, the Caribbean was led to the champion’s trophy during 2009. This was also the time when the popular players of the team boycotted the cricket tournament due to a dispute about payments. He was also the head coach for the Scottish league, the Combined Campuses and Colleges.

The last couple of years for the Proteas were not so good to them since they have lost a lot of players deals by Kolpak which this crisis has also caused grave ruin for the country’s cricket. Cricketer, Faf du Plessis faces a tough task to maintain his play for the upcoming World Cup but thanks to the help of a coach, Ottis Gibson, he will do anything to redeem the South African’s cricket team and bring home the bacon.

Gibson was also a cricketer during his earlier days and it was mentioned that he was really a competitive player. He was the former West Indies bowler and he had 12 years of experience in coaching cricket.

Because of Steve Rhodes, the Bangla Tigers has won their first-ever multi-nation tournament. They finally have entered the World Cup back in 2019 and they will be creating a name for themselves in the biggest cricket match.

Steve Rhodes had served the Worcestershire cricket team for about a decade and a year. After this, when he was appointed to Bangladesh, the country won a series of One day Internationals and a T20 series against the West Indies in their own country.

Pakistan team’s coach, Mickey Arthur always has a trick up in his sleeves. Pakistan became unstoppable because of him. He took charge for Pakistan back in 2016 and he was also a coach for three international sides. He has led South Africa to the highest podium during the One Day International match back in 2008.

Under the governance of Gary Stead, Kane Williamson has been a repetitive victor of the cricket matches. As well as the Black Caps, starting from the World Cup, they have garnered about 3 wins. Stead was also a former batter in which his experience has served its purpose to guide his team to excellence.

He followed former head coach, Mike Hesson, and starting then he has helped New Zealand to wins.

He was the former opening batsman for his team and is currently sharing his knowledge with the newer generations of cricketers. He was the senior assistant to head captain, Trevor Bayliss, of the Lankan Lions.

He has mentored the Sri Lanka A team for about 3 years. Because of him, the Lankan Tigers won against India, Pakistan, and South Africa on white-ball cricket. He is now the trusted coach of Sri Lanka which is why he is paid a hefty amount of almost half a million dollars.

Formerly assisted by Hathurusingah, champion coach of England made the country one of the World Cup’ favorite back in 2019. He coached Sri Lanka before and has led the country in the 50 over the World Cup finals.

The Sydney Sixers has also won because of him. Bayliss has been one of the best coaches in the world of cricket which is why he truly deserves to be paid about a quarter until a million dollars.

Now, taking the second of the top list is the head coach of the Kangaroos, Justin Langer. He is still working as a cricketer even if he is already the coach. His skills and determination have always led all the teams he has coached to multiple victories which is why he is trusted and one of the highest-paid coaches in the world.

And of course, the creme of the crop, all-time highest paid and highest league cricket coach, is Indian Ravi Shastri with a whopping salary of more than a million dollars.

He was formerly a cricketer for India and was an all-rounder which is why it is no shock that he is the most formidable coach in the world of cricket. Ravi Shastri was the director of the men in the Blue team back in the World Cup 2015. Under his leadership, his team has won consistent triumphs on Test Matches in Australia.

He was also paired with one of the phenomenal cricketers, Virat Kohli which I am telling you, was the collaboration of the century and has set the 2019 World Cup to a roar of cheering and confetti.