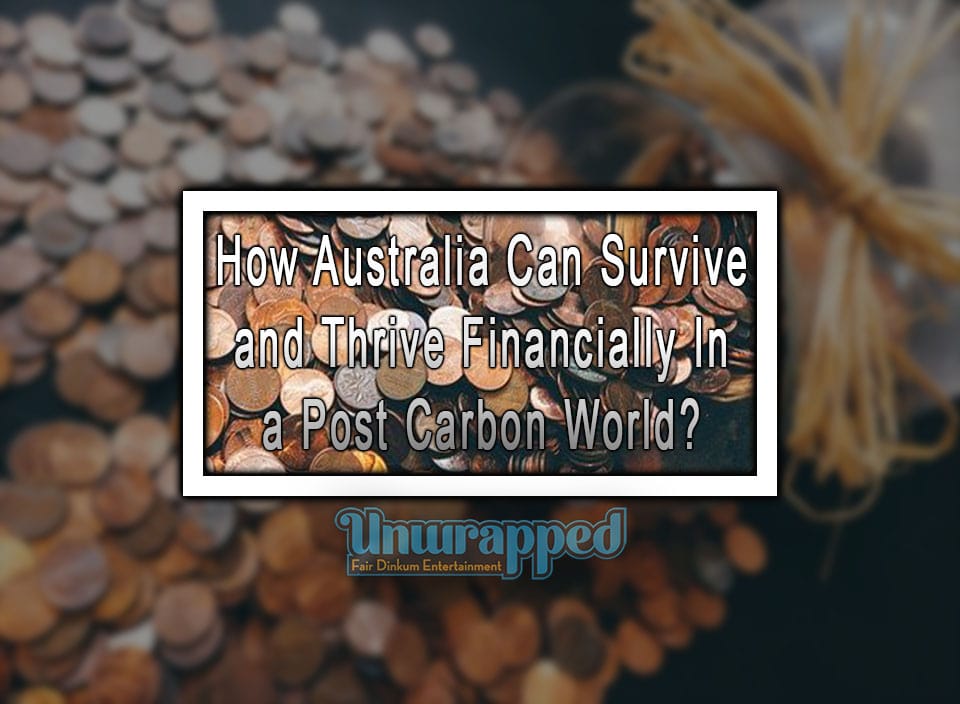 Global Warming and Its Influences on Australian Economy

The last couple of centuries have seen unbridled growth and development on the global level. This development has been made possible due to a number of factors, among them one of the key driving factors has been access to energy sources that was not possible previously.

Ever since the discovery of oil, the pace of human development has increased because oil has allowed development at a faster rate. This development however has come at a very great price and that price is being paid by the environment, by the animals and humans together. The amount of pollution that we have pumped into the atmosphere and the environment in the last couple of centuries is now at a point where we have almost done irreparable and irreversible damage to our earth.

We are at that level where we have now realized the extent of damage that we have done, a sense of urgency is now setting into the nations of the world to take steps to minimise the damage that we are doing and shift to a more sustainable way of life.

Paris Summit and Sustainable development goals are trying to bring nations together and create a framework where we can reach a consensus to start reducing carbon emissions. Current SDGs target 2050 for most of the countries to reach net-zero emissions. This gives us roughly 30 years to transition our economies and way of life towards more sustainable energy sources.

Every country has got its own unique set of problems and opportunities in this regard. If we look at Australia we can see the same.

According to “Our world in data”, Australia contributes approximately 1.2% towards the global carbon emissions. Although this may look like a negligible amount, it is quite significant on its own. It is however good to see that the contribution of Australia has dropped down to 1.2% from 1.4%. This has been due to conscious effort of shifting towards renewable energy sources.

At present roughly 21% of the total energy of Australia is produced by renewable energy sources and there is potential to increase this contribution even more.

Each year Australia produces around 400 million tonnes of carbon emissions. The graph above shows how these emissions have increased consistently over the years.

This graph shows that sector wise it is the energy sector that contributes the most towards carbon emissions, followed by agriculture and then transport.

Now that we know how Australia is contributing towards carbon emissions, the next question is how to reduce these emissions and at the same time transform the country and the economy for the post carbon world?

It goes without saying that Australia will need to focus on the renewables. The biggest challenge will be to transform the energy and transport sector. The energy sector supplies energy to households and factories. The households can be converted to solar energy through solar panels.

For this the government will have to subsidise solar panels and encourage the people to make the shift. At the same time investment must be done to research and develop better batteries to make solar power more efficient for households. Factories however need more power and solar power alone will not be able to power them. Australia has the option of using hydro electric but this once again will not be able to meet the growing demand for energy.

An alternative that Australia has right now is in the form of hydrogen. Australia is among those few countries that have the ability to make hydrogen from solar and hydro electric. This ability however needs to be converted into competitive advantage and for that the government needs to carry out feasibility studies to make sure that the country can produce hydrogen at a cost that is affordable. At present hydrogen is costly but like every other technology, further research can come up with ways of reducing the cost of hydrogen and making it cheaper.

For this Australia needs to enter into strategic partnerships with other countries that are serious about making a shift for a net zero emissions future. Some of these countries include China, Japan, Korea, Singapore, Sweden and Finland.

Also See: 5 Stoicism Practices That Will Help Bring Calm to the Chaos We Face Today

Most of these countries are heavily industrialised and therefore they have the same issues that Australia is facing right now for scaling up the renewable energy sources. This is a collective problem and a solution to it will also be found in a collective manner. By collaborating with these countries and building strategic partnerships, there is a possibility of making cost-effective infrastructure for hydrogen-based energy for the future.

Hydrogen can be produced through solar and hydro sources and Australia has got plenty of these. The next step is to develop plants to produce hydrogen. For this Australia will need to enter into partnerships and bring together leading experts. Work is already being done upon this, companies like Province Resources are carrying out feasibility studies. But let us look at the roadmap that Australia has to follow here.

Once the initial research is done, Australia will need to develop hydrogen generation plants. This will be the third step. Simultaneously Australia will need to set up new infrastructure for hydrogen based energy. The pipes that are used for LPG and natural gas cannot be used to supply hydrogen, as hydrogen atoms are too small. This upgradation of infrastructure is going to take a lot of time and resources.

The fourth step will be to build hydrogen cells. At present Japan and Korea have got a competitive advantage in hydrogen cells. If Australia can develop strategic partnerships with these countries now, it can pay dividends in the future.

These four steps will prepare Australia to shift towards net zero emissions. Before all of these steps can be taken, the leadership needs to sit together and come up with a 10,2- and 30 year strategy for this shift. This has to be planned in advance to prevent any confusion later on.

We have seen the sectors that contribute towards carbon emissions. The government and policy makers will have to prioritize how to shift each sector, at the same time making sure that this shift does not damage the existing competitive advantage that Australia has got over other countries.

Australia Unwrapped does not endorse or vouch for the accuracy or the authenticity of postings, comments or the article

Also See: What’s the Australian Government Doing to Help The Economy Recover For 2021

How to Find the Next Hot Stock and When to Sell?

Stay Connected
41,936FansLike
5,684FollowersFollow
820FollowersFollow
Previous article
Buy Only What You Need and Not What You Want to Live a Successful Life
Next article
How to Save 10000 Dollars in One Year?

Does Fiverr Really Work? 6 Ways To Succeed On Fiverr