Hot Female Celebrities in Their 20s 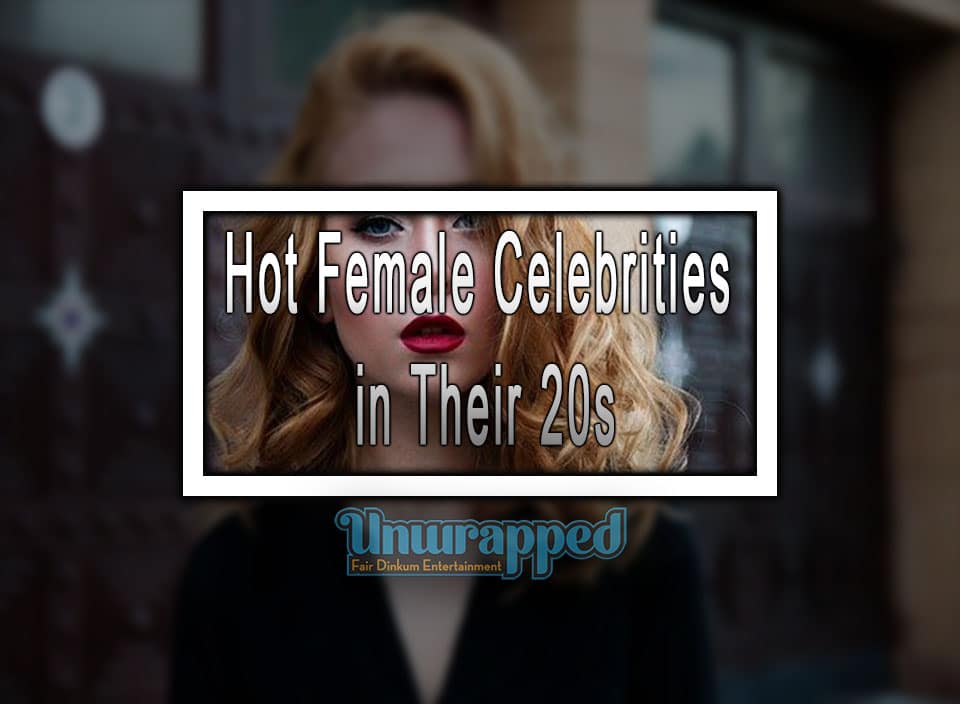 The World Best Looking Female Celebrities in their 20s

Over time, we’ve seen a multitude of pretty faces on our TV screens from Asia to Europe. Ever since the 19th century, Hollywood has been giving us a glimpse of the most beautiful female celebrities.

And with the emergence of social media, the list is increasingly rising. Despite other female celebrities settling down, the world has never run out of gorgeous ladies. The truth is, we lost count of them already.

Even so, we still try our best to track down today’s hot female celebrities in their 20s. These are the glamorous, famous, talented, and head-turner beauties around the world in this generation.

Undoubtedly, the 27-year-old songstress is leading the list. Arianna Grande has almost 200 million followers. That, and not to mention her handful of hit-topping songs. Indeed, she’s the hottest female celeb in today’s generation.

Although she started way earlier, her breakthrough was when she starred in a Nickelodeon’s Victorious in 2009. She’s also a philanthropist. Now, how about that as an influencer.

At number two is another pretty, petite, talented, and well-celebrated singer-actress, Selena Gomez. Currently, she has over 180-million followers and million-worth hit songs.

Everyone adored her when she was in “Barney & Friends” and Disney’s “Wizards of Waverly Place.” And we fell for her charm in “Monte Carlo.” It is incontestable that this 28-year-old charmer is more than just a pretty face. In between, she’s busy with her philanthropic works.

The 25-year-old model and media personality is a clear-cut stunner. Kendall Jenner is among the hottest female celebrities in her generation. She’s been gracing her fans with fabulous OOTD snaps. Hence, it’s not a surprise that she has over 133 million followers.

Next on our list is the actress-singer Zendaya, who is a striking beauty at 24 years old.

Zendaya is a striking beauty in Hollywood. The singer-actress started her career as a “Disney Channel” talent in the hit TV sitcom “Shake It Up.” From there, she starred in several films and TV shows.

She placed butterflies in everyone’s stomach when she starred opposite Tom Holland and Zac Efron. Zendaya is also a model, and thus, she’s catching attention online. That is why she has more than 70 million followers.

The 23-year-old Cuban singer-songwriter, Camila Cabello, is a sizzling hot female celeb, who first appeared in “The X-Factor” and is now making big waves in the music industry. And currently, she has more than 50 million followers on social media.

She dazzles in her mega-hit song “Havana,” which already has more than a billion views on YouTube.  And pumping up the heat, she sizzles in “Señorita,” a duet with her now-boyfriend Shawn Mendes. But more than that, she’s also involved in several philanthropies.

Irrefutably, the K-pop world also boasts with quite a few hot female celebrities in their 20s. And one of these hot celebs is the all-female group “Blackpink.” They’re crossing borders with their popularity.

As a group, they have more than twenty million followers, and each one surpasses the 20-million mark. All four females, namely Lisa (23), Jennie (24), Rose (23), and Jisoo (25), are gorgeous and talented.

Hitting up the Korean entertainment industry is the 25-year-old actress-singer, Bae Suzy. Her presence as one of the hottest female celebrities in their 20s across the globe is undeniable.

She’s among the favorite faces in many endorsement products. Aside from that, she’s also become one of the most sought-after hosts after gracing several films and TV series.

The smart girl Betty Cooper in “Riverdale” is joining our list of hot female celebrities in their 20s. Lili Reinhart, 24, has gained popularity over time with her hit Netflix series. That is why she has more than 24 million social media followers.

Another “Riverdale” beauty is winning hearts online with her alluring looks and style. The 26-year-old actress, who played Veronica Lodge in the hit Netflix series, Camila Mendes has gained over 23 million followers.

First rose to fame in the Nickelodeon series “Zoey 101,” Victoria Justice is, without question, a hot female celeb in her 20s.

The 27-year-old actress graced several TV shows and films since 2003 when she joined the industry. She’s also a singer and has done a few philanthropy works. And today, she has more than 19 million followers.

Joining on the 12th spot is Korea’s sweetheart IU. The 27-yeard actress-singer is continuously creating worldwide sensations with her top-rating drama series and songs.

Her last drama, “Hotel de Luna,” is among the most-watched series in 2019. Recently, her “Into the I-Land” tops the chart along with Queen B’s “Brown Skin Girl.” Thus, it’s not surprising to know she has over 14.6 million followers.

Famous as one of the beautiful angels of “Victoria’s Secret,” the 24-year-old is our thirteenth hot female celeb. She’s been charming her 14.2 million followers with her gorgeous supermodel OOTD snaps.

Included countless times in the list of the “Most Beautiful Women in the World” is the 22-year-old actress and model Liza Soberano. She starred in several films and TV series, and not to mention the face of many brands and products.

As of writing, she has 13.3 million followers and counting.

The 24-year-old multi-talented, towering beauty is up on our fifteenth spot. Hailee Steinfeld, whose works include “Ender’s Game,” “Pitch Perfect,” “The Edge of Seventeen,” and “Bumblebee,” is a stunner.

She’s also a big supporter of different advocacies and causes. Hence, her more than 13 million followers have someone worth emulating.

An acting Bollywood heiress, Ananya Panday is our top sixteen hot female celebrities in their 20s. The 22-year-old actress is the daughter of the veteran actor Chunky Pandey. And today, she has 12.7 million followers.

One of Asia’s superstars is the 24-year-old actress Kathryn Bernardo. Boasting a total of more than 12 million followers, she has continuously charmed people with her beguiling smile and prowess in acting.

Another pretty face in the K-drama world is winning hearts online with her beauty and charm. The 21-year-old actress has already starred in a handful of top-rating series and films. Hence, she has 9 million followers to date.

She played as a young princess and queen in a highly acclaimed Korean series. She took the audiences’ breath away in “The Last Princess,” “Moon Embracing the Sun,” and “Guardian: The Lonely and Great God.”

Beauty with brains Manushi Chhillar is our nineteenth hot female celebrity in her 20s. The 2017 Miss World is making a difference not just as a beauty queen but as a social activist supporting many causes. Today, her social media followers boost to 6 million.

We all love her as Princess Aurora in the mega-hit film series “Maleficent.” The 22-year-old Snow-White-like beauty is gaining more popularity with her gorgeous OOTD snaps and photo ops on her social media. Hence, she already has more than 4 million and counting followers.

Started on Disney Channel, the showbiz royalty daughter is another hot female celebrity in her 20s. Zoey Deutch is a 25-year-old actress, who is the offspring of actress-director mom Lea Thompson and director dad Howard Deutch.

Her breakthrough was when she played the lead role, Rosemarie Hathaway, in 2014 film “Vampire Academy.”

The 26-year-old actress and Rami Malek’s apple of the eye, Lucy Boynton, is one hot female celeb. With almost a million followers, she’s an eye-catcher. She starred opposite Malek in the box-office hit and Academy-award-winning film “Bohemian Rhapsody” in 2018.

Hitting on our twenty-third spot is the “Ready or Not” star Samara Weaving. Often compared to Margot Robbie due to their similarities, the 28-year-old actress-model over eight hundred thousand followers.

Victoria Justice’s equally beautiful sister, Madison Grace, is also one hot female celeb in her 20s. The 24-year-old beauty has appeared in a few films and TV series. Her drop-dead gorgeous look has caught the attention of more than six hundred thousand followers.

The 23-year-old beauty turn heads not only in her films, such as “Goosebumps” and “The Giver,” but she also stunned us in her OOTD snaps. That is why she’s gaining more than half a million followers. Aside from being an actress, she’s also a model and a filmmaker.

Completing our list is the 26-year-old pretty actress, Erin Moriarty. She’s currently playing the role of Annie January or Starlight in a “Prime Video” original series entitled “The Boys.”

Over time, Erin Moriarty is gaining more attention from various audiences and fans worldwide due to her undeniable charm.

Also See : How-to Guide For Book Marketing and Promotion for Self-Published Authors in 2020

How to Write Your Resume: 5 Ways to Stand Out from...