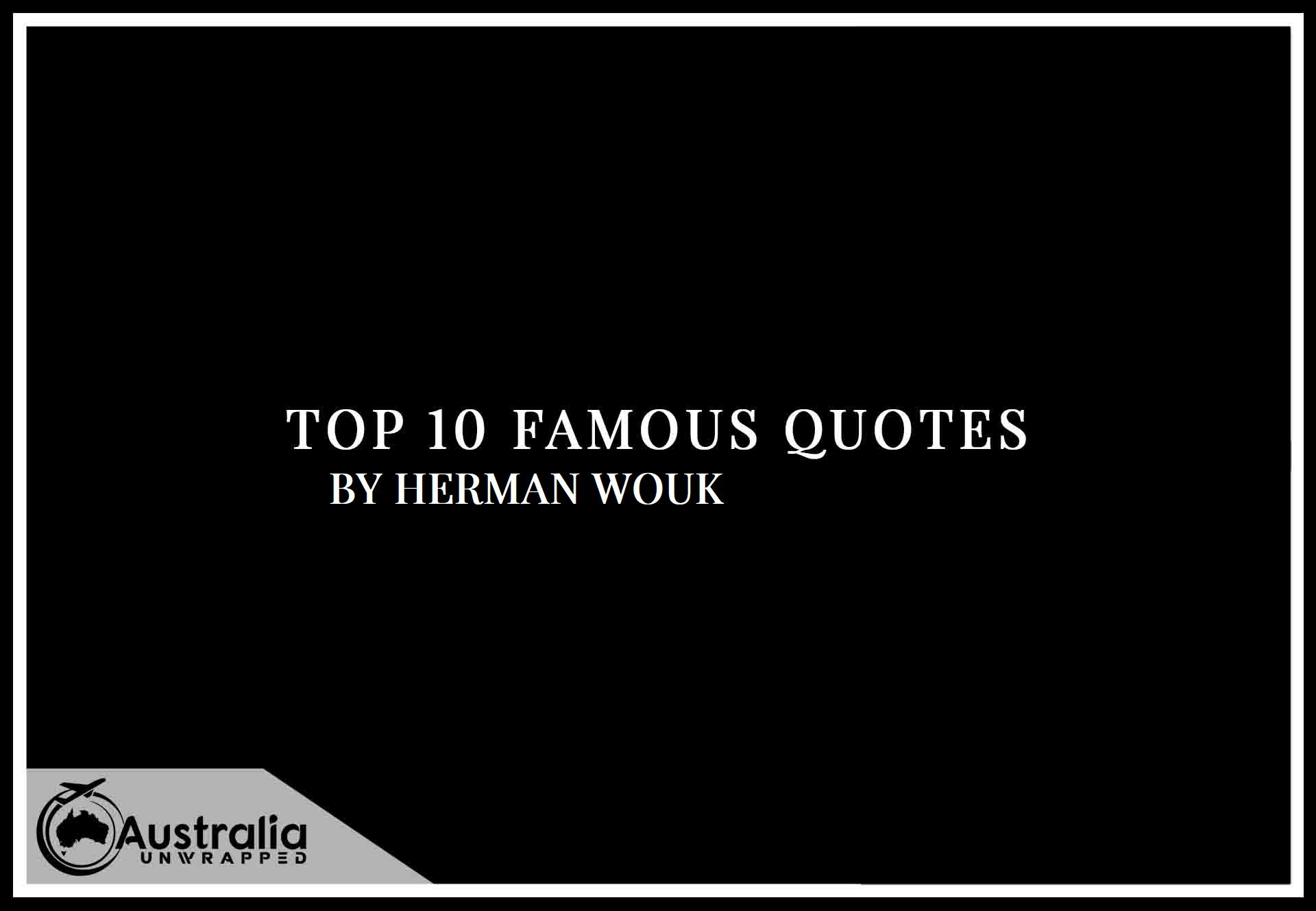 Herman Wouk, a writer whom I am guessing you love? Here are our 10 best Herman Wouk quotes for you to enjoy. At Australia Unwrapped we believe every book has at least one quotable line, and our mission is to find them all. Here you will find Herman Wouk’s top 10 popular and famous quotes. Like every good writer Herman Wouk made a number of memorable quotes, here are some of our favorites:

Herman Wouk earned a living as a scriptwriter for Fred Allen before serving in World War II. His career as a novelist spans nearly six decades, bringing him resounding international acclaim. He lives in Palm Springs, California

More from the Author: https://amzn.to/3dzOzP4

“This life is slow suicide, unless you read.”
― Herman Wouk, The Caine Mutiny

“In the glare, the great and terrible light of this happening, God seems to signal that the story of the rest of us need not end, and that the new light can prove a troubled dawn.

For the rest of us, perhaps. Not for the dead, not for the more than fifty million real dead in the world’s worst catastrophe: victors and vanquished, combatants and civilians, people of so many nations, men, women, and children, all cut down. For them there can be no new earthly dawn. Yet thought their bones like in the darkness of the grave, they will not have died in vain, if their remembrance can lead us from the long, long time of war to the time for peace.”
― Herman Wouk, War and Remembrance

“Look at us. We build giant highways and murderously fast cars for killing each other and committing suicide. Instead of bomb shelters we construct gigantic frail glass buildings all over Manhattan at Ground Zero, a thousand feet high, open to the sky, life a woman undressing before an intruder and provoking him to rape her. We ring Russia’s borders with missile-launching pads, and then scream that she’s threatening us. In all history there’s never been a more lurid mass example of the sadist-masochist expression of the thanatos instinct than the present conduct of the United States. The Nazis by comparison were Eagle Scouts.”
― Herman Wouk, Don’t Stop the Carnival

“The Navy is a master plan designed by geniuses for execution by idiots. If you are not an idiot, but find yourself in the Navy, you can only operate well by pretending to be one. All the shortcuts and economies and common-sense changes that your native intelligence suggests to you are mistakes. Learn to quash them. Constantly ask yourself, “How would I do this if I were a fool?” Throttle down your mind to a crawl. Then you will never go wrong.”
― Herman Wouk, The Caine Mutiny

“Remember this, if you can–there is nothing, nothing more precious than time. You probably feel you have a measureless supply of it, but you haven’t. Wasted hours destroy your life just as surely at the beginning as at the end–only in the end it becomes more obvious.”
― Herman Wouk, The Caine Mutiny

“Peace, if it ever exists, will not be based on the fear of war, but on the love of peace. It will not be the abstaining from an act, but the coming of a state of mind.”
― Herman Wouk, The Winds of War

“I try to write a certain amount each day, five days a week. A rule sometimes broken is better than no rule.”
― Herman Wouk

“The girl you marry and the woman you must make a life with are two different people.”
― Herman Wouk, The Winds of War

“Income tax returns are the most imaginative fiction being written today.”
― Herman Wouk

“When in danger or in doubt, run in circles, scream and shout.”
― Herman Wouk

Quotes for all, here you found our selection of 10 Herman Wouk quotes. Make sure you help by commenting your best Herman Wouk quote below and sharing our favorite authors so we can look them up, read some of their works and give you the best quotes we can find. We hope you enjoyed our top 10 quotes by Herman Wouk. However, feel free to comment below if you disagree or would like to include some other great and memorable Herman Wouk quotes in our list.

“Religious people tend to encounter, among those who are not, a cemented certainty that belief in God is a crutch for the weak and the fearful…Now the belief in God may turn out at the last trump to be a mistake. Meantime, let us be quite clear, it is not merely the comfort of the simple–though it is that too, much to its glory–it is a formidable intellectual position with which most of the first-class minds of the human race, century in and century out, have concurred, each in his own way….speaking of crutches–Freud can be a crutch, Marx can be a crutch, rationalism can be a crutch, and atheism can be two canes and a pair of iron braces. We none of us have all the answers, nor are we likely to have. But in the country of the halt, the man who is surest he has no limp may be the worst-crippled.”
― Herman Wouk, This Is My God: The Jewish Way of Life

More from the Author: https://amzn.to/3dzOzP4